Biggest year yet for fundraising in Riverview Honorary Mayor’s race 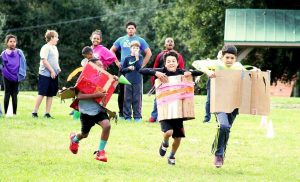 Students in the after school program at the YMCA Camp Cristina will benefit from the donations earned by Tammy Holmberg as the winner of the Riverview Chamber of Commerce Honorary Mayor’s race. The photo above shows kids participating in a handmade cart race.

For the first time ever, a local Honorary Mayor’s race gleaned more than $40,000, which enabled the event’s chief sponsor, the Riverview Chamber of Commerce, to give 60 percent of the proceeds to the candidates’ charities instead of the usual 50 percent.

Under the leadership of this year’s Event Committee Chairs Melissa Hartmann and Robert Hintze, four candidates raised money for the charities of their choice. 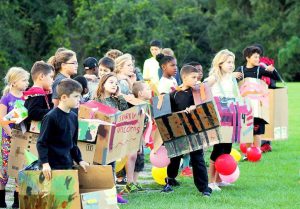 Tammy Holmberg of Chick-fil-A  Lake Brandon (on Causeway Boulevard) pushed herself to be able to donate a check for $14,092.20 to YMCA’s Camp Cristina. In addition to that, Kohl’s added $4,500 to Camp Cristina’s fund, saying it was “in honor of how hard Holmberg had worked.”

At the dinner when the checks were presented, Holmberg was unexpectedly honored by Stacy White, Hillsborough County Commissioner District 4 and the commission’s Chaplain.

Three other candidates worked hard for their charities as well. 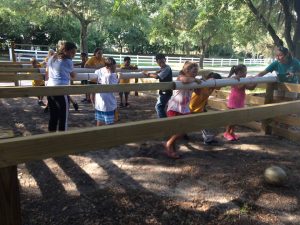 Debbie Kirkland, chamber membership director, stated in a telephone interview Sept. 24, that this was the most successful Honorary Mayor’s Race ever.

According to Lalita Llerena, communications director for the Tampa Area YMCA, all the money donated by Holmberg will go to the YMCA’s Camp Cristina.

“This will ensure that no child is turned away from summer camp or an after-school experience provided at the 65-acre campsite,” said Llerena. “Through community donations we are able to offer financial assistance to families who may not be able to afford the full cost of summer camp or after-school programs. We are very grateful to Tammy and all our donors so that more deserving kids can attend camp and are able to reach their full potential.” 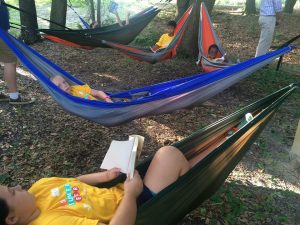 At Camp Cristina after school programs, kids can use the reading hammocks to relax and enjoy a good book.

The chamber usually keeps half of the totals collected in the annual race for operations and events during the year; it is its main fundraiser.

For more information about the mayors’ event, or the Riverview Chamber of Commerce, visit riverviewchamber.com.