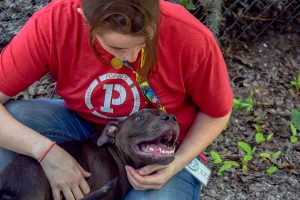 ANDREA SHAY PHOTOS
Most likely a pit bull terrier mix, age 3-4 months, the puppy offers a classic pit bull smile for the camera while being cuddled by Maddie Ferguson.

When I dropped my car off at a local mechanic’s shop last Wednesday, I expected to walk the five blocks back to my house and start on some homework before my afternoon class. Instead, an abandoned puppy stole my heart, and I spent the morning attempting to get him to safety.

He stood on the sidewalk, approaching me excitedly, then happily wagging his tail and dancing around me as I petted him. He had no tags, no collar, or any other identifying information, and I guessed he was about 3 months old. I found out later that based on his build and appearance, he’s most likely a pit bull terrier mixed with one or more other breeds, and he’s between 3 and 4 months old.

I looked around to see if anyone was watching him, but I saw nothing. I found an elderly man across the street, and I asked him if he knew if the puppy belonged to anyone in the neighborhood. Through broken English, the man explained to me that the pup had been dropped off out of a car the previous day, and he tried to convince me to adopt the young dog myself. My cats would likely stage a revolt if I came home with a puppy, so my next move was to get him to a rescue organization. 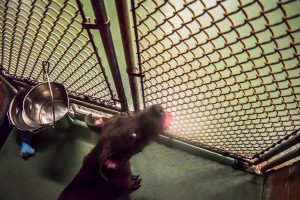 The puppy inside of his kennel.

With the help of some neighbors, I ultimately got connected with Manatee County Animal Services, who took down my information and brought the pup back to their Palmetto-area shelter. Several days later, I was able to make a special trip to the shelter to photograph him, find out more about him and how the pet adoption process works. I also learned how MCAS works with the community.

Maddie Ferguson, MCAS shelter operations manager, warns people against simply abandoning animals for whom they can’t or don’t want to keep or take care of. “There are a lot of places people can go to,” she said. “If one place is full, there are other places. Don’t leave the animal somewhere that’s full or bring them [in] overnight. There are so many animal rescue places that people can try.” 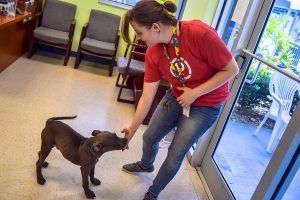 She went on, “Abandoning animals leaves them at the mercy of nature. They might not survive [or] they can be hit by a car. Our goal is to really be a resource for the community. There are places where people can go for low-cost clinics, people can find access to [obedience and animal care] classes. We advocate people keeping their animals.” 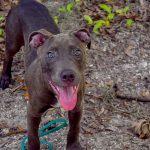 Most likely a pit bull terrier mix, age 3-4 months, the puppy offers a classic pit bull smile for the camera.

In the case of pit bulls and other dogs often used in dogfighting, not only does dumping them on the street put them at the mercy of nature, but they are also at risk of being abused and trained to fight if they are found by someone who is involved in dogfighting.

As of this writing the abandoned pup—still nameless though he seems to have acquired “Handsome” as a nickname—is still at Animal Services in Palmetto. As I submit this article for publication, he already has a potential “furever” adoption possibly in the works. According to MCAS staff, all dogs that haven’t been surrendered by their owners are placed on a 5-day hold once they arrive; in the case that they’ve been lost, this hold gives the owner time to come forward and claim them. Once the 5 days have passed, if the animal is heathy and passes a behavioral evaluation, he or she becomes available for adoption. 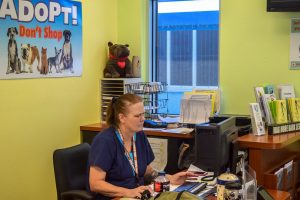 Animal Services has its own adoption center, and they also work with other area agencies like Nate’s Honor Rescue, the Humane Society and Manatee No-Kill, which, once they have available space, will transfer animals from MCAS to their own shelters and put them up for adoption.

Ferguson encourages people interested in getting a pet to look seriously at adopting a rescue animal. The idea that rescues are lifelong strays or feral animals is a misconception and definitely not accurate. “A lot of the time animals we get were animals that were owned before; they’re not feral,” she said.

“They’re very workable, they have some training, they’re used to people and commands,” Ferguson said. “The volunteers work with them daily to get them socialized. Sometimes these animals have escaped or have been let go or have been confiscated because they were tethered outside without supervision or human contact.” 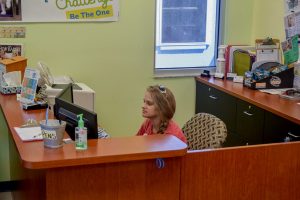 Receptionist and kennel specialist Haili Brooks took my phone calls and helped me get connected with the operations manager to put together this story.

To prevent the county from confiscating a pet — considered an “animal at large” — and to make it easy for someone to return a lost pet, Ferguson tells pet owners, “Make sure they have tags, microchip [them] and don’t leave them tethered or unattended.”

Some readers may be aware that MCAS received public outcry after 2015 video footage showed volunteers not following best practices when performing euthanasia procedures.

Both Ferguson and her supervisor, Animal Services Chief Sarah Brown, were hired this year and are providing new leadership. Ferguson came on board in June and Brown began in February. 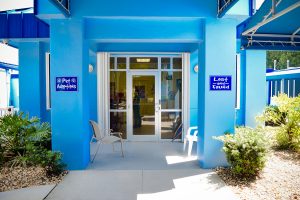 The entrance to the facility is welcoming and easy to find.

Ferguson said that while she can’t accurately discuss events that occurred before she began working for MCAS since she wasn’t there, she does affirm that since she’s held her position, MCAS is “making sure that animals are treated humanely. [MCAS] work[s] with staff and volunteers to communicate more and make sure we’re following correct protocol. We want to move forward and help these animals so they can become more adoptable and find their forever home.”

Ferguson said that MCAS is currently most in need of blankets and canned cat and dog food as well as volunteers. They are at 305 25th St. W., in Palmetto. Their phone number is 941-742-5933 and their hours are Monday through Friday from 8 a.m. to 5 p.m.

If you’d like to help homeless animals, please contact MCAS or any of the shelter or rescue agencies listed in the Pet Pages catalog, available throughout Sarasota, Manatee, Charlotte and DeSoto counties, or visit petpages.com to find an agency.