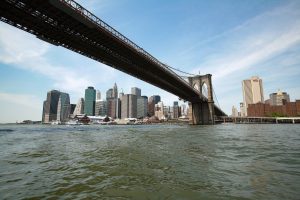 Mitch Traphagen Photos
Sailing under the Brooklyn Bridge seven years ago, I had no idea that someday it would look like home.

On a beautiful September Saturday, I stood on the seawall at the yacht club and marina in Atlantic Highlands, N.J., and gazed out into the mooring field and anchorage. The towers of Manhattan, diminished only by the distance, shimmered to the north. Sandy Hook with its incredible beach and historic military base were to the east along with the unimaginable vastness of the Atlantic Ocean.

As I stared out, I wished I could look through a window to the past. Seven years ago, my boat was anchored out there. Back then I had endured a heavy storm and a handful of beautiful days before I upped the anchor, rounded Sandy Hook and headed out into the Atlantic with my bow pointed towards Florida.

I was sailing an old boat I had purchased on the north side of Cape Cod. From there to New Jersey was a mere blip on the long trip south, but there had already been several highlights. One was sailing down the East River alongside Manhattan and out past the Statue of Liberty. It seemed all so exotic and with sailing under each bridge, I duly noted it in the ship’s log. 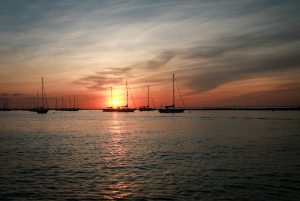 At anchor near Atlantic Highlands, N.J.

I know there are people who know early in life what course they will steer. I am not among them, and sometimes I’m envious of those who do know exactly where their lives will lead, into what harbor they will sail. I had never expected to be 53 years old and not know what I’m doing with my life. But then, I never really expected to be 53 years old.

The week I had spent at anchor near Atlantic Highlands was transformative, to a degree. While cruising on a sailboat, my only mode of transportation on land was walking. On a particularly hot day, I did my laundry, bought supplies at a hardware store and decided against my better judgment to stock up at a grocery store that was an uncomfortably long walk from the anchorage. Carrying all that back presented a huge challenge, and at more than one point I was certain death was imminent.

And then a new, black BMW pulled over and a woman called out to me, “You look like you could use a ride.”

In truth I looked like 40 miles of bad road, loaded down with laundry and grocery bags and soaked in sweat. I can’t believe they let me into their nice car. They dropped me off at the dinghy dock and drove away. If I could have shouted through my imaginary window to the past, I would have thanked them again. 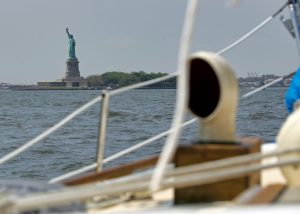 If someone had suggested in the early 1990s that I would someday spend the bulk of my life in Florida, I would not have believed it. I was living and working in Minneapolis and planning — someday — to buy a boat on the West Coast to sail the Pacific. Florida, to me, was a land of swamps, mosquitoes and people waiting to die.

But then I had a business meeting in Georgia. As a thank you for lots of long hours for the meeting, my company offered to fly me anywhere for three days and pick up the tab. I’d never been to Florida, I had no interest in Florida, but it was close by and Sanibel Island seemed to strike a chord.

I flew into Ft. Myers, picked up my rental car and drove across the causeway to paradise. I was immediately taken by everything — the beaches, the water, the people working in the shops. It didn’t hurt that it was February with below-zero temperatures back in Minneapolis, while I basked in the warm beauty of Sanibel. I barely made my flight back; I didn’t want to leave the island and dawdled until I no longer could. I can still smell the skin cream I bought at the Sanibel grocery store that I used to slather on my sunburned face. 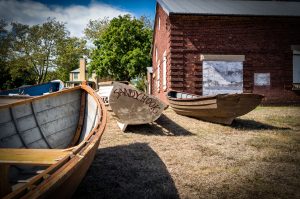 By the next year, I had moved to what was then known as Bahia Del Sol Marina in Ruskin, and thus began some of the best years of my life. My wife and I were married by (a barefoot) Pastor Dave Looney, now retired from the Ruskin United Methodist Church, on a beach on Captiva Island and life turned idyllic.

But, of course, the only constant in life is change. And things changed.

My first awareness of New Jersey came from a skit on Saturday Night Live. I’m paraphrasing, but it went something like this. Two guys meet and discover they are both from New Jersey.

Guy 2: Off the Turnpike.

New Jersey has some significant freeways. The Turnpike is a sea of concrete, with separate lanes for cars and for trucks and buses. It works but is intimidating for those who encounter it for the first time. And yes, there really is an Exit 15X. But New Jersey is also a state of incredible contrasts, with small towns and staggering beauty. Coincidentally, New Jersey is known for its tomatoes.

My first real contact with it was Newark International Airport for connecting flights, which, back then, I had less-than-lovingly dubbed, “Rathole International” (it has improved considerably since then). I could see the chemical plants from the terminal. I could also see the Statue of Liberty from the right vantage point; it was stunning, like out of a storybook. But Jersey had never entered my mind as anywhere I’d want to live.

As I sailed out of Atlantic Highlands and rounded Sandy Hook into the Atlantic, I continued south for more than 24 hours along the Jersey Shore. It was beautiful — one long beach, with occasional Ferris wheels on the horizon.

In the subsequent years, my wife and I were drawn back to the New York City area, which includes Jersey City, often referred to as the sixth borough. If someone had suggested years prior that I would live in New Jersey, I would never have believed it. But there is something about this city that feels like home. My family has a 360-year history in New York. An ancestor of mine was the mayor of Jersey City in the 1870s.

The population density is a shock coming from South Hillsborough, but people, by and large, are extremely friendly and unfailingly polite. We can walk to the grocery and other stores; Midtown Manhattan is a cheap 20-minute train ride away.

I often walk down 23rd Street in Chelsea, where the bomb exploded on Saturday night. My favorite building in the city, the Flatiron Building, is on one end and a little theater that is the home to an artist’s group of which I’m a member is on the other. In between, there’s a good burger joint.

Despite what you may have heard to the contrary, New Yorkers are kind and decent people. A hotel downtown offered residents impacted by the bomb a free dinner and even a free night’s stay, if needed. Law enforcement went to work and a suspect was in custody in just over 36 hours.

This metro area is probably the safest city I’ve ever been in. Through the Grace of God and physics, no one was killed in the blast. Yet I wonder if things will change as a result. I doubt it.

I also wonder what I would have told myself had I been able to open that imaginary window to the past. What could I tell myself now?

Life has been a blindfolded roller coaster ride filled with unexpected turns. I can revisit places I’ve seen and try to learn from the past, or I can move forward, trying to embrace the uncertainty.

But I can’t dawdle too long. I’m making my way back to Florida soon, back to my sailboat, waiting in a marina in Ruskin.

Perhaps there is some constant in life. It’s right where it’s always been.