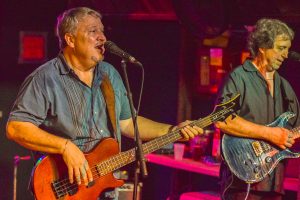 While no one can say Gumbo Boogie is a secret — they’ve played everywhere from Jacksonville to Key West and beyond — they still qualify as one of Florida’s must-hear hidden gems.

The band plays what one founding member, Ryan Langley, calls “blues rock country-flavored by New Orleans, Louisiana.” Although over time a few of the members have changed, the band’s been together for 21 years and has played for popular venues like House of Blues and Donald Trump’s Mar-A-Lago estate. They’ve also played at large sporting events put on by the National Football League, NASCAR, Major League Baseball and the National Hockey League as well as collegiate events held by Florida State University and the University of Florida, among others. 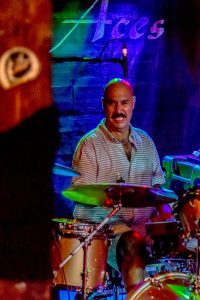 Drummer Charles “Chaz” Trippy serves up some soulful blues rhythm with Gumbo Boogie. Trippy also played with the Gregg Allman Band during the late 1980s when the band released the covers I’m No Angel and Just Before The Bullets Fly.

Gumbo Boogie’s set list makes them a hit for fans and venues alike, since their vast repertoire reaches as far back as “[The] 1900s on up to some ’90s, up through the ages,” said Langley. “Any decade, we can probably do a song from it.”

When asked about their style, he spoke about how they have changed with each addition or loss of members. Wigginton, for example, has influenced the band because of his emphasis and experience with the blues, but in the past the band has had a stronger Louisiana or Zydeco influence.

Gumbo Boogie now plays all over the Southwest Florida area and Langley encourages people who haven’t heard them or their style to “give it a chance. It’s lighthearted music that’s timeless.”

You can catch the band in Bradenton at Clancy’s Irish Pub at 6218 Cortez Rd. W., every fourth Saturday; and at Aces Live, 4343 Palma Sola Blvd., every third Sunday. They’ll also be playing as the opening band for Marcia Ball at Aces Live Thursday, Oct. 6. 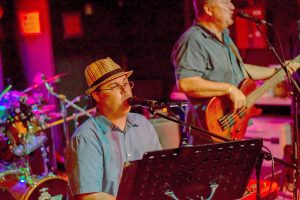 Ryan Langley, a founding member of Gumbo Boogie, sings while playing piano at a live show. 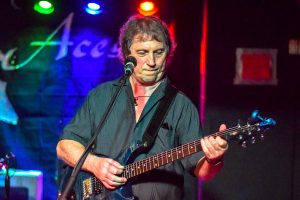