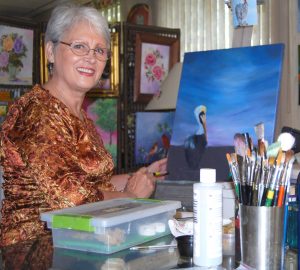 CARL MARIO NUDI PHOTO
Artist Mara Trumbo shows one of the projects students will paint during the classes she is teaching at the Parrish YMCA.

Growing up, Mara Trumbo was inspired by her very artistic family.

A great-uncle, Giuseppe Ferrata, was a noted violinist and composer.

And her grandmother, Alda Nenci-Ferrata, although not formally trained, was a skilled artist in her own right.

“All my life I wanted to paint,” Trumbo said. “I’ve been so influenced by my family.”

Since moving to the United States around 20 years ago, Trumbo fulfilled her dream and has become an accomplished artist herself. 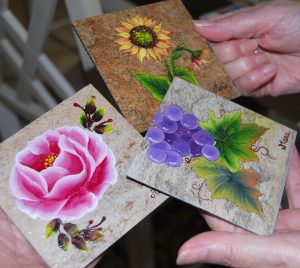 Mara Trumbo will teach students in her art class at the Parrish YMCA a one-stroke painting technique.

Taking years of lessons from internationally known artists, she teaches classes throughout Manatee and Sarasota counties, as well as several foreign countries.

Recently, Trumbo has started teaching a series of classes through the Parrish Arts Council at the Parrish YMCA at 12214 U.S. 301.

The classes include learning how to paint with acrylics and water-based oils, constructing paper and glass bead jewelry, eggshell mosaic and one-stroke painting techniques.

A student completes a project at each three-hour class.

“When a student sees their completed piece it gives them a sense of satisfaction,” Trumbo said.

The classes are held from 2 to 5 p.m., every other Sunday, with the next one on Sept. 25. Classes are $35 each and include tuition, patterns, graphite, reference photos, paints and other supplies. 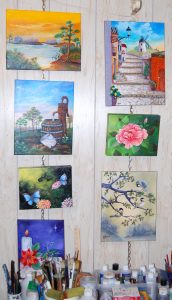 Mara Trumbo’s home in Colony Cove is filled with her artwork.

Born in Bolsena, Italy, Trumbo moved to Rhodesia (now Zimbabwe) when she was 11 years old, and she painted and did other artwork in school.

While living in Johannesburg, South Africa, Trumbo attended artist workshops and took watercolor lessons, but her long career in the travel industry prevented her from pursuing her passion for art full time. 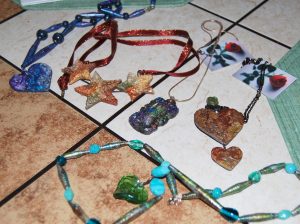 Students in art classes Mara Trumbo is teaching at the Parrish YMCA will learn to make paper glass bead jewelry.

She began working in the restaurant industry, but never lost her passion for the creative arts.

“I would watch all the art instruction shows on PBS,” Trumbo said.

This led her to take classes in 1997 at Art Center Sarasota with Gary Jenkins, who had a show with his wife, Kathwren, on PBS.

The following year Trumbo kept working on her art, but wanted to learn different techniques and pursued any opportunity to do so. 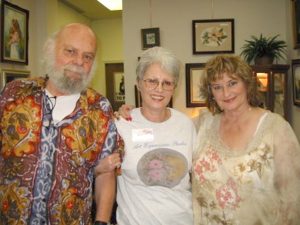 She saw that Robert Butler, one of the Florida Highwaymen artists, was at an event in Sebring she was attending and she talked to him about classes.

Because he no longer was teaching, Butler put Trumbo in touch with his daughter, Dorene Butler, an accomplished artist in her own right.

“I got excited about doing different techniques,” Trumbo said.

Through the years she has taken classes from Brenda Harris, Robert Butler, Bill Alexander, Donna Dewberry, Priscilla Hauser and others, becoming certified to teach many of these well-known artists’ techniques.

At the same time, Trumbo has developed her individual style.

“I often combine all these techniques into one, giving it my own flavor,” Trumbo wrote in her press release biography. 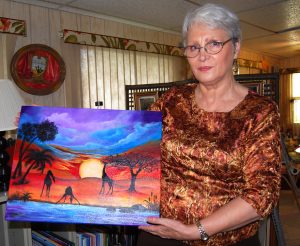 Mara Trumbo holds one of a series of paintings she did influenced by living in Africa.

As a professional instructor, Trumbo has taught at least 10 artists to become teachers.

“This gives me as much joy as selling one of my paintings,” she said.

Now an accomplished artist, Trumbo’s works are on exhibit or owned by museums and individuals across the U.S. and several foreign cities.

Trumbo’s desire to share her passion for art has led her to work on producing a PBS television show pilot called ArtVentures.

The show will be geared toward a youth audience with children teaching painting to children.

Trumbo said many children are no longer receiving art education in school. 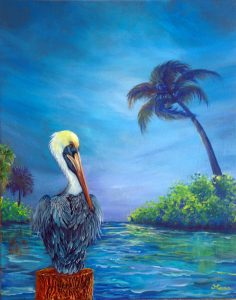 With the art instruction shows on PBS mainly aimed at adults, she said her production can provide free art education for youth.

Trumbo will be casting children for the show after raising enough funds for the pilot production.

Organizing art projects for the community also has been part of Trumbo’s mission.

At one time she lived next door to the Center for Great Apes in Wachula. The center is a sanctuary for chimpanzees and orangutans that were raised with humans and cannot live in the wild.

They took care of one of the chimps that played “Cheetah” in the Tarzan movies and also are caring for Bubbles, the chimp Michael Jackson owned.

Trumbo got to know the founder of the center, Patti Ragan, and volunteered to paint murals on the walls of the apes’ living quarters.

She organized a group of artists and provided the rooms with tropical jungle-like scenes.

Trumbo and her husband of 18 years, Bob Trumbo, live in Colony Cove. They met while she was working at an Italian restaurant in Sarasota.

She has three adult daughters, Carol Lyn, Diana and Sandra.

After spending an hour with Trumbo, a visitor will learn how passionate she is about her art and teaching.

“Painting is like minestrone soup,” she said. “It’s different every time because you use different techniques.”

Along with the YMCA classes, Trumbo will begin teaching the art projects series at a Blake Medical Center h2u – health to you center in October.

For more information on the YMCA, the h2u classes and the PBS television show project, call Trumbo at 941-417-2324.