A big thank you for first responders

A big thank you for first responders 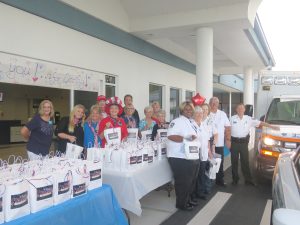 BILL HODGES PHOTOS
A team of volunteers were on hand to welcome First Responders who came to the United Methodist Church Sept. 14 to receive a goodie bag along with a big “thank you.”

We go about our business every day knowing that someone from the sheriff’s department, fire department, hospital/community and disaster response teams, etc. are there for us; they are only a phone call away. The staff at United Methodist Church of Sun City Center wanted to show these “first responders” some appreciation. Their action was spurred by the Dallas police shootings.

After some brainstorming, they decided to sponsor a “First Responders” Appreciation Day on Sept. 14. On the big day, there was a steady stream driving through the church portico to receive an abundance of thank yous from the cadre of volunteers waiting for them. At the same time, they were given a goodie bag filled with foods and drink they could keep on hand while in their cars or on call. Sam’s Club, when they heard about the effort, contributed as well. 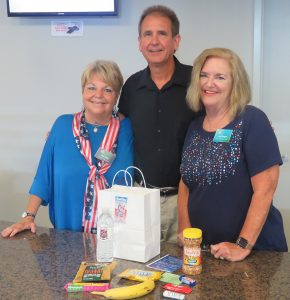 Director of Ministry Pat Hill worked closely with Jane Keegan who heads the church’s Community Connections team to organize the event. She said they really didn’t know what to expect, but by the end of the day, they had given out 170 bags. That’s a huge success in anybody’s book.

The church’s Senior Pastor, Dr. Charlie Bentz, called the event awesome. “It’s great to recognize those who do not get honored enough. They give unselfishly but are often forgotten. I am very proud of our church here,” he said.

Jeff Merry, Hillsborough County Sheriff’s Dept. Community Resource Deputy, stationed at the SCC substation said that he was impressed with the gesture. “The first responders take the brunt of any tensions in the situation at hand, and a public event shows that the silent majority really appreciates what they deal with on a daily basis,” he said. 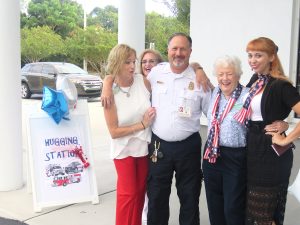 The Hugging Station was a nice addition to the day. Everybody needs a hug.