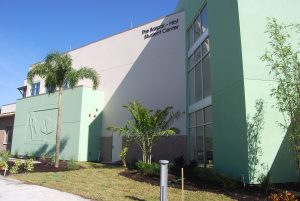 Sept. 10 was a huge day for Southeastern Guide Dogs, when it hosted the grand opening of its new $8.5-million Barpal-Hirst Student Center. The ultramodern facility was funded entirely by more than 700 individuals, small businesses and organizations and was named for lead donors Isaac and Margaret Barpal and Keith G. Hirst, residents of Palmer Ranch in Sarasota.

“This new addition to our growing campus is built with frugal quality and a strong adherence to the value of good stewardship of our donors’ contributions,” said Titus Herman, Southeastern Guide Dogs CEO. “And most importantly, we designed the building with our students in mind.

“We are committed to providing (them) with the highest quality experiences and services possible while they are under our care,” he continued, noting that after 34 years and nearly 3,000 guide dog pairs, Southeastern’s current facility has had its day. 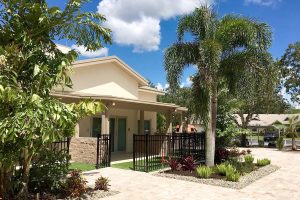 Built in the 1970s, the original two-bedroom home has been renovated and refurbished numerous times over the years to accommodate the organization’s growth.

“It will be demolished; it’s literally falling apart,” Herman said. “We’re just going to help it along.”

From wall to wall, the building is filled with special touches designed to fully address the needs and comfort of sight-impaired students and veterans who come to Southeastern’s 35-acre campus for training with their new dogs.

For example, fenced-in covered patios directly off each student’s room features easy access and “canine” grass with sanitation drainage so the dog can relieve itself at minimal effort by its new owner.

The dorm rooms themselves have comfortable furnishings specially built and donated by Rooms to Go, which also furnished the building’s lecture halls and lounges. Each of the 12 fully functional, private rooms includes an Amazon Echo, a hands-free, voice-controlled speaker that plays music, answers questions and controls smart devices. Each also has its own bathroom, individual air conditioning controls, flat-screen TVs, mini refrigerators and automatic, adjustable illumination. 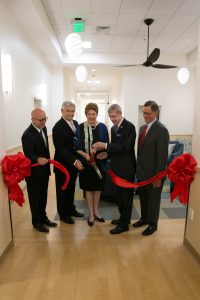 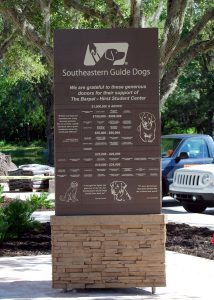 A brick and stone monument in the garden area at the Southeastern Guide Dogs Barpal-Hirst Student Center commemorates the center’s major donors.

“There’s no doubt that people have noticed how fast puppies grow around here,” said Hirst. “It seems like one minute they are tiny and playful, and the next minute they are embarking on a wonderful career as a guide dog. Well, we can say the same thing about the rapid growth of Southeastern Guide Dogs…This spacious new facility will expand (its) ability to help others, and each student will leave this beautiful student center with a world-class, life-changing dog.”

“It’s truly impressive how this local organization is run and how it operates on (its core of) more than 700 volunteers,” he said. “There is nothing more satisfying to us than to go to a graduation and see the students with their dogs on the day they get their new ‘driver’s license’ and freedom.” 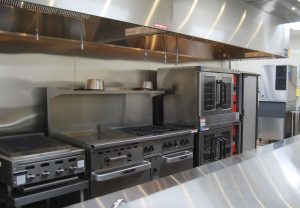 Two chefs will prepare meals for the students, staff and volunteers at Southeastern Guide Dogs in this new stainless-steel commercial kitchen in the Barpal–Hirst Student Center. 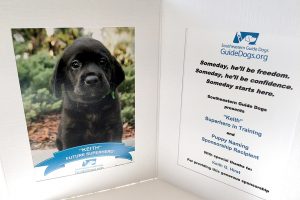 LOIS KINDLE PHOTO
At Southeastern Guide Dogs, it all starts with the puppies. Shown is a black Labrador pup named Keith named by Keith G. Hirst. Individuals who contribute at least $5,000 or businesses that provide that amount in in-kind donations receive the honor of naming a future super hero. 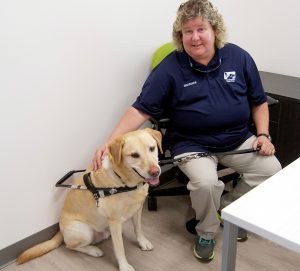 LOIS KINDLE PHOTO
Suzy Wilburn, director of admissions and graduate services at Southeastern Guide Dogs, and her guide dog, Carson, check out their new office on the first floor of the new Barpal–Hirst Student Center. 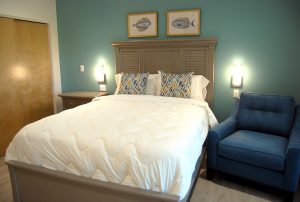 LOIS KINDLE PHOTO
Students rooms at the Barpal–Hirst Student Center at Southeastern Guide Dogs were designed for efficiency, functionality and comfort. Vision-impaired and veterans who qualify for the program come here to stay at no charge while they train with their new guide or service dogs.