Emerson Paul Grassan, 98, of Sun City Center, passed away Sept. 3, 2016. Born in Dayton, Ohio, Emerson had a wonderful life traveling all over the world with his lovely wife Helen (preceded in death in 2005).

Emerson is survived by several nieces and nephews spanning from Ohio to Florida. There will be no services per his wishes. In lieu of flowers donations can be made to LifePath Hospice of Sun City Center, Florida. 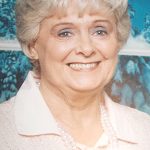 Vicki was born March 29, 1922, in Antwerp, Ohio. She was preceded in death by her parents Harry and Mary Leaman; her twin sister Esta; two other sisters, Thelma and Flossie; and three brothers Fordyce, Lee and Grant. She is survived by her only child Carma Witwer (Bill); grandson Robert Keairnes; great granddaughters Brittney and Cheyanne Keairnes; and many nieces and nephews.

Vicki attended high school in Antwerp, Ohio. After high school she graduated from Rarenscroft Beauty College. During World War II she worked for the General Electric Company and then worked for GE again in the 1970s.

Vicki was a member of the Sun City Christian Center in Wimauma.

Per her request, no memorial service has been scheduled. 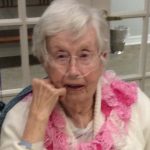 A resident of Sun City Center for 24 years, Eunice passed away peacefully on Sunday, August 21 at Plaza West in Sun City Center, Florida. Beloved wife of the late Capt.William E. McConnaughey (retired United States Navy), loving mother of Thomas McConnaughey, James (Rosemarie) McConnaughey, and Robert (Ashley) McConnaughey; beloved grandmother to Richard, Hannah, and Haley McConnaughey. Her niece Pamela DiMeo was like a daughter to her. She is also survived by nieces Gracie, Janie (Albert) and Pat.

Daughter of Roland R. Ensor and Grace (Hall) Ensor, Eunice was preceded in death by her sisters, Betty Adair and Grace DiMeo.

She was an “A” student, President of both her high school class and college sorority AXΏ, and an unsurpassed homemaker. She will be greatly missed.

Burial will be in Arlington National Cemetery where she will rest in peace with her husband Bill.