Since 1991, members of the South Bay Genealogical Society have been helping people find and explore their roots.

The society began as a special interest group of the Computer Club of Sun City Center, but members soon realized how large the interest was in the surrounding communities, and it changed its name and location to include residents from all over the area. 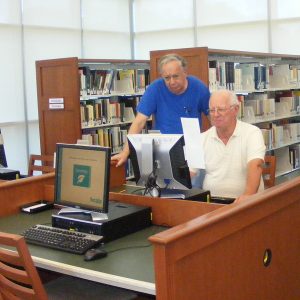 PENNY FLETCHER PHOTOS
Ed Frank and Don Churchill go over a complex family tree for a family member seeking answers to his heritage.

From the day SBGS started with its first 12 members, it has grown steadily and now has a regular membership of 150 families who pay $20 a year (per family, not person) in dues. This money   goes to pay speakers who speak on a variety of techniques and search methods at each monthly luncheon meeting.

After lunch, members share their most recent finds, experts in maps, cemetery searches, surnames, religious organizations, Internet resources, marriage and business licenses, fraternal records and a plethora of other sources.

“It’s important now to find out as much as you can about your family history because of all the new genetic developments that affect (medical) medicine  treatments, susceptibility to disease, all these things,” said Ed Frank, who serves as the director of the South Bay Genealogical Society’s Room in the SouthShore Regional Library. “There’s been so much progress in DNA analysis. An explosion of genetic finds.”

Of course, all genealogists agree the best thing anyone can do to begin is to question their elders while they are still alive. Grandparents can usually go back at least one generation, which gives someone two to three generations with which to start. But many don’t have that luxury; or wait until the time to ask questions has passed.

“We like people to know about the treasure trove of information we have at their disposal,” said Jack Fischer, one of the group’s founders and creator of its monthly newsletter, LINKS.

“We don’t expect people to trace their ancestry back to Charlemagne or Adam and Eve, but maybe we’ve got one horse thief way back that we can brag about,” Fischer joked.

Don Churchill, the society’s current president, said the group wants to be sure people know they can come in and get help.

“We have someone manning the (SBGS) room three days a week ­— Tuesday, Wednesday and Friday from 10 a.m. to noon,” said Churchill.

Census started in 1854 in most places, although in many spots it wasn’t very accurate until the 1940s, he added. 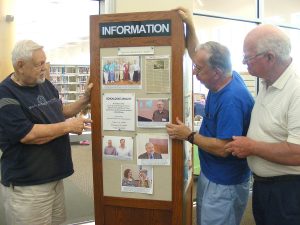 “We have a program, ‘Ask a Genealogist,’ that has proved to be helpful to more people than not. There are many ways to find what you’re looking for,” Frank added. “Children have a right to know their heritage as far back as they can go.”

Since 1997, the SBGS has taught two classes a year at the Community Church College in Sun City Center, both spring and fall semesters, and have also held workshops and maintain a Personal Ancestral File and Roots Magic assistance on an as-needed basis.

The Immigrant Ships Transcribers Guild shares its information with the society, making its 1,800 ship manifests available.

Frank, Fischer and Churchill make it clear there are many sources for which people pay that are free when used as part of the library program.

“Each one does something differently,” Fischer said.

The big ones shown on television like Ancestry.com and 23andme aren’t all there are.

Categories are broken down by names, towns, branches of military, foreign country (and cities), birth year and estimate from census ages, immigration, veteran’s gravesite locators and religious archives as well as ethnic groups.

From Europeans to Asians to Native Americans and Africans, many records are available; even to the point of saying something like “Irish immigrants who went to Boston.”

At the library’s 10th anniversary in November, programs are being planned by members of the SBGS, who want the community to know just how big a part of the regional library their organization played and how it can help residents now.

“When the first public announcement was made by Joe Stines, the then-current library director, a large number of SBGS members turned out to help plan. This impressed Stines with the importance of genealogy locally,” Fischer said. “The result was the inclusion of the largest genealogy collection in Hillsborough County’s library system at SouthShore, except for the main library downtown.”

The SBGS was consulted on book selection, décor and many other aspects in the planning process, giving genealogy importance to the library system.

From September through May the SBGS meets on the third Tuesday at noon at the SouthShore Regional Library for a luncheon and program.

People who want to find out more about the society may show up at a meeting or go to rootsweb.ancestry.com/~flsbgs/. You can send an email to South-Bay@juno.com.