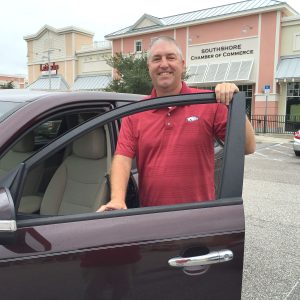 LOIS KINDLE PHOTO
Steve “Brownie” Brown, a resident of Apollo Beach, drives for Uber, a ride-share service where he uses his own car, sets his own schedule and earns money taking people where they want to go.

Steve Brown moved to Florida three years ago when his wife took a new job in the South Shore area. One day as he was dining at Circles last year, a friend suggested the Arkansas native drive for Uber, a ride-share service where drivers use their own cars, set their own schedules and earn money taking people where they want to go.

“Brownie,” as he is known in the community, looked into the company, liked what he saw and filled out an online application.

“They did a background check, insurance check and made sure I had a recent model vehicle,” Brown said. “I then attended a workshop covering how the Uber system works. The technology is great and really easy to use.”

He received his first pick-up request eight months ago, and he’s been driving area residents around in his 2015 Kia Sorrento ever since.

“It’s a lot of fun,” said Brown, 46. “I’ve never had a bad experience. What’s awesome is that Uber handles all the money, and then deposits my commission directly into my checking account every week.

Uber gives Brown 80 percent of the rate it charges the customer and keeps 20. A ride to Tampa International Airport is $30 to $60, Brown said, depending on driver availability, time of day and demand. Multiple riders can leave from the same location and share one rate.

Brown, an Apollo Beach resident, has an Uber app on his phone that notifies him whenever he’s the closest available driver to someone in the area who needs a ride. He has 15 seconds to respond before another Uber driver is notified.

Brown said he knows of about a half-dozen drivers in South Shore, including himself.

“I never know where I’m taking someone until I actually do the pickup,” Brown said. “That’s because Uber doesn’t allow picking and choosing rides based on where drivers think they will make the most money.

“I don’t actually know how much I made on a trip until I drop off the customer,” he said.

Brown said Uber currently doesn’t have the capability to allow customers to schedule rides in advance. They can only request a driver when one actually is needed.

So he set up the Apollo Beach Uber Connection page on FaceBook as a temporary workaround. When someone joins the closed group and is accepted, they can post transportation requests for advance rides using Uber drivers.

Brown said he is notified when someone makes such a request on the page. He then contacts the customer and gets the particulars over the phone. (Other South Shore drivers are similarly notified.)

When Brown arrives at the customer’s location, both he and that person log into the Uber app, provide the pick-up location and enter where the rider wants to go. Uber sends the charge amount for the customer to accept or not. Once the customer pays Uber via credit card, Brown then proceeds to the requested destination.

Driving for Uber is perfect for people who like working flexible hours and being their own boss, Brown said. He covers all expenses for gas and insurance and is responsible for taxes as a self-employed individual.

“I enjoy the ease of the job and meeting new people,” he said. “I set my own hours, can take time off whenever I want and I make good money.”

Uber has operated in Hillsborough County since 2014.

For additional information on becoming a driver or scheduling a ride, visit uber.com or call Brown at 479-530-3059.