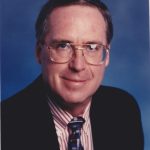 Miner “Jerry” Schrader, age 73, went to eternal peace on August 17, 2016, at Life Path Hospice, Sun City Center, due to complications from Parkinson’s Disease. His loving wife of 20 years, Patsie, was by his side.

Jerry was born in Algona, Iowa, on July 12, 1943, the oldest child of Bernice Burlingame Schrader and Miner Gus Schrader. He went to high school in Britt, Iowa, and graduated from Wartburg College, with a Masters Degree from the University of Iowa. He is survived by his wife Patricia Ginley, Sun City Center, his children Jay (Clare) of St. Paul, Minn., daughter Cindy (Jeff) Cronick of Osceola , Wis., and son Kurt (Deb) of Forest Lake, Minn., his six cherished and adored grandchildren, Greta and Peter Schrader, Danny and Tommy Cronick, and John and Carolyn Schrader, his brother Jim (Judy) Schrader, sister Judy (Marti) Schrader, sister Jean (David) Lang, and nieces, nephews, cousins and other in-laws.

Jerry was a respected teacher and school administrator for 40 years in Iowa, Minnesota and Florida and mentored numerous high school students along the way. He remained in contact with many of them well into their professional careers. He retired from Miramar High School, Broward County in 2005. The same year he was honored for 43 years of officiating high school and college football. After retirement, Jerry and Patsie spent their summers at their lake cabin in St. Croix Falls, Wis., enjoying fishing, boating, activities with the grandchildren, and attending many, many baseball games of his beloved Minnesota Twins. Jerry and Patsie appreciate all the family support through his 16-year battle with Parkinson’s Disease. Jerry had a wry sense of humor and a kindness toward all he met.

At Jerry’s request there will be no service. Memorials may be made to the Michael J. Fox Foundation, P.O. Box 5014 Hagerstown, MD 21741 or www.michaeljfox.org.