Aug. 26, Lennar unveiled its first model home in a new community it is building at Little Harbor, Ruskin.

The ribbon-cutting ceremony attracted locals from communities all around South Shore including members of the SouthShore Chamber of Commerce and Lennar executives Mark Metheny, division president of the Tampa area; Steve Seeger, director of sales and marketing; and Dale Human, senior vice president of regional sales. 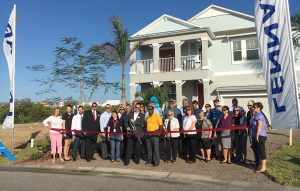 It is the beginning of Lennar’s first waterfront community in Tampa Bay, although the company has many other homes in developments around South County.

Seven luxury homes were previously built by Bahia Sun, a prior developer. 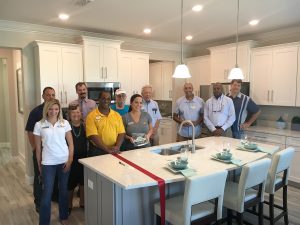 Members of Lennar and the SouthShore Chamber of Commerce gather in the kitchen of the waterfront model home in Ruskin. The model is 3,835 square feet Jupiter floor plan, with five bedrooms and a loft.

The community began in 2005 during the economic boom but slowed around 2007 and in 2009, the site was foreclosed on by the lenders.

This development will be just off U.S. 41 and Shell Point Road adjacent to the resort, club and marina already at Little Harbor.

Homes will range from $400,000 to $700,000, according to Tyler Killette of B2 Communications, the agency handling the public relations for the waterfront community.

Nearly all the lots will be waterfront so residents can have their own dock and boatlift. A high sea wall will be constructed to avoid flooding. 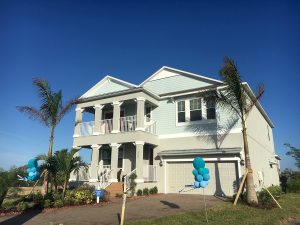 Coastal themes will predominate the styles, and homes will range in size between 2,500 square feet to more than 4,000 square feet, Metheny said. Hillsborough County projects 600,000 new residents moving into the county by 2040. Homes will be in short supply and building is taking place everywhere. Waterfront homes, however, are hard to find.

The location at Little Harbor will give residents direct access to Tampa Bay and the Gulf of Mexico without having to work through rivers, canals, or under bridges.