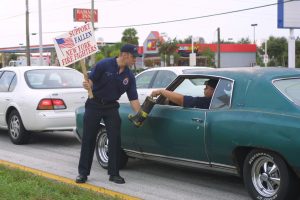 MITCH TRAPHAGEN PHOTOS
In the days after September 11, 2001, Hillsborough County firefighters volunteered to collect donations for the many hundreds of firefighters lost at the World Trade Center. From that day, the nation began to look at first responders with new respect and admiration.

Day One was a shock. In the following days, when the shock began to wear off, the horrific events had been seen and all of the words had been spoken on television, people sprang into action collecting donations and even donating blood. On September 11, 2001, people prayed. With that, the nation sought solace from the inexplicable to a higher power for their own grief and fear, but mostly for the losses endured by thousands of families and for the future of this nation and the world.

For the first several years following Day One, companies in South Hillsborough and Northern Manatee would hold memorial events. Today those events have largely faded into the past, as would be expected. While remembering the past, the nation must look to the future.

The physical scars are largely gone in New York, Washington, D.C. and Pennsylvania. A year ago the new One World Trade Center reopened, standing at a symbolic 1,776 feet tall, the tallest building in the Western Hemisphere. 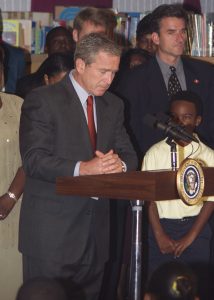 President George W. Bush during a moment of silence at Booker Elementary School on the morning of September 11, 2001.

More recently, a new transportation hub opened on the World Trade Center grounds, and new buildings are still rising on the site of what was once known as Ground Zero.

Other than a significant security apparatus and a beautiful memorial with the footprints of the former twin towers as pools with waterfalls and the names of the victims engraved, there is little to suggest what happened 15 years ago on September 11. 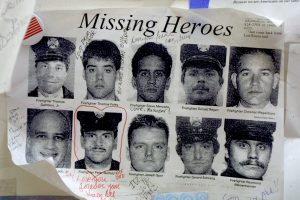 Signs in search of loved ones and heroes who went missing at and near the World Trade Center on September 11 were omnipresent in the city in the days and months that followed.

But everyone age 20 and up certainly remembers. The scars may be invisible, but they are still present. They exist in our collective national psyche. They even exist in our legislation. America has not forgotten the worst terror attack in its history.

Local and national reporters were gathered in the media center at Booker Elementary School in Sarasota, waiting for President George W. Bush and what was to be a talk on education. We were told to turn our cell phones and pagers off. One cameraman, however, received a message that a plane had struck one tower at the World Trade Center. Photographers and reporters left pre-assigned positions to watch the news unfold on a small television set in an adjacent room.

Before long, we were ushered back to our places and told the president would be out shortly. Despite being media, most of us were among the least informed of the events that were still unfolding at that time.

It was from President Bush that we found out that it was no accident, that the second tower had been hit. He spoke only briefly, held a moment of silence and quickly left both the school and Sarasota. 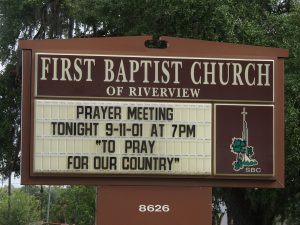 By the evening of September 11, 2001, people sought solace through prayer for the inexplicable loss the nation had endured.

Most everyone appreciated that the world had changed, likely forever. That morning was the last time I was able to walk to an airport gate without a boarding pass, hoping to catch a photograph of Air Force One taking off. The plane was gone, and a member of the National Guard advised that I leave the airport quickly as five to eight airliners were still unaccounted for and the Sarasota airport may have been targeted. Like everyone else, I had no reference for what to do with the information that came in horrible waves.

The news ran nonstop — for days there seemed to be no commercials, just images, reports and commentary. Other than occasional jet fighters, there were no commercial airliners in the sky. People turned out to donate blood and to donate money. The nation joined together, perhaps like never before in its history, in shock and grief.

When the airport re-opened, people had to adjust to not walking with loved ones to the airside and the gates. By September 14, when flights slowly began again, only those with a boarding pass and identification could go. On that day, and that day only, officials from Tampa International Airport escorted media in small groups to get a final glimpse of the airsides. People were afraid on that first day — the fear inside the airport for the first few flights was palpable. No one knew what would happen. The nation’s foundation was still quaking. 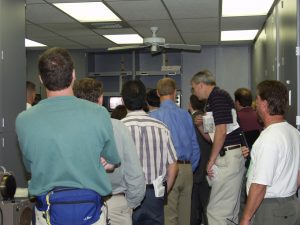 Reporters at Booker Elementary School in Sarasota for a talk by President George W. Bush, gathered in an adjacent room to see what was happening at the World Trade Center. The President came out briefly and held a moment of silence. It was from President Bush that many reporters, myself included, learned that it was no accident … the second tower had also been hit. 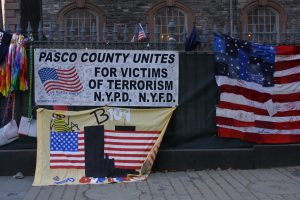 At what became known as Ground Zero in New York City, people from Pasco County showed their support, as did millions of Americans.

It seemed few people had a reference as to how life would be in the aftermath. Across the nation, events were cancelled en masse. Nearly three weeks after Day One, the television show Saturday Night Live returned to the air, with then-New York Mayor Rudolph Giuliani and members of the NYPD and FDNY as guests. In the opening monologue, one cast member asked the mayor if it was okay to be funny again. The mayor responded with, “Why start now?” And thus, the physical wounds began to heal.

On Sunday, 15 years later, those lives will be remembered, with ceremonies in New York, Washington, D.C. and in rural Pennsylvania. They will be remembered as many Americans remember them every single day. The physical scars have healed; the emotional scars remain.

An entire generation is approaching adulthood in the post-9/11 world. Hopefully they will never know the shock, the grief, the sheer terror, and the utter inexplicability of what happened and why humans would do such a thing to their fellow man. Hopefully they will never know the confusion, the magnitude of loss and the pain of life abruptly — likely permanently — changed.

Day One, September 11, 2001, remains with all of a certain age, even 15 years later. May there never be another day like that again. The nation is healing, the buildings have been repaired and replaced, but it will likely never fully heal. Buildings show the nation moving forward, still strong, still brave, but generations will pass before the scars created on that day could possibly go away forever.