keeping an eye on Zika problem 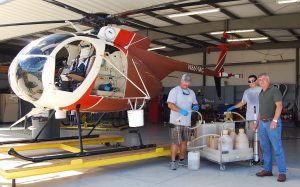 Because of the high level of concern about the Zika virus in Florida, Mark Latham was asked to give a presentation on mosquitos and the virus at the June 7 meeting of the Manatee County Board of Commissioners.

The issue has become so important, that this was the first time over the 22 years Latham has been director of the Manatee County Mosquito Control District, that has been asked to speak before the board.

The public awareness of the virus has been heightened with all the news reports, Latham said during an interview in August at the district office in Palmetto.

He said his employees have always responded to complaints of residents about mosquitos in their neighborhoods.

“We’re not doing anything different than we do on a routine basis,” he said, “although complaints are up, so we are answering those calls more often.”

In response to concerns of Zika, the district has been putting more effort into public education. 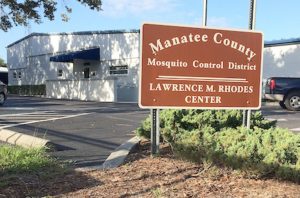 They have been spreading the word on what precautions and actions the public can take to control the mosquito population, such as making sure there is no standing water in their yards where mosquito larvae can live.

“While we may be responsible for the control of mosquitos in natural areas, such as swamps,” Latham said, “we have no power to enter someone’s yard to control mosquitos in residential areas.

“All we can do is get the message out to empty rain collecting containers,” he said. “And we do that by talking to the residents and with door hangers and flyers.”

What made the situation even more complicated was the species of mosquitos that carries the virus, the aedes aegypti and aedes albopictus.

Both are found only in urban yards where the larvae live and grow in containers of water that often go without being emptied.

Although aerial spraying to control mosquitos was not done on a routine schedule, Latham said the district sprays to kill the adult mosquito in urban neighborhoods when they cannot get access to private property to eliminate the larvae habitat. 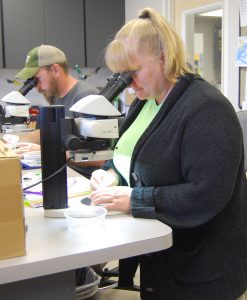 Entomologist Barbra Bayer, in the foreground, and Israel Stinton, entomology technician, count and identify mosquitos in the lab at the Manatee County Mosquito Control District offices.

Along with resident complaints, the district also responds to reports of a Zika infection from the Manatee County Health Department.

Travel-related infections occur when a virus-carrying mosquito bites the patient during a visit to a country where there is a serious Zika infection outbreak, such as Brazil.

As of Aug. 23, there were three travel-related Zika infections in the county reported by doctors to the health department.

The district responded to these reports by concentrating efforts within the area where the person with the infection lives.

The symptoms of Zika “may include acute onset of low-grade fever, rash, joint pain, conjunctivitis (reddening of eye), body aches, headache, eye pain and vomiting,” according to the Florida Department of Health website

Sarah Revell, the media and marketing manager of the state health agency in Tallahassee, said there is no treatment for Zika.

“Patients are advised to get rest, drink fluids and treat symptoms,” Revell said. “Patients are also advised to avoid mosquito bites while (they are) experiencing symptoms to prevent further spread (of the infection).”

It is recommended that patients avoid being outdoors while symptomatic and wear bug spray and long clothing to cover skin, she said. 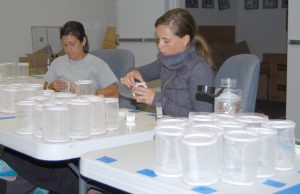 Ambyr Marsicano, education specialist, on the left, and Katie Williams, junior biologist, at the Manatee County Mosquito Control District, build traps for mosquitos to be studied.

The health department website warns “the Ministry of Health of Brazil has reported an increase in the numbers of newborns with microcephaly in areas experiencing Zika virus outbreaks.”

It also states more studies are being conducted to confirm the connection between the Zika virus and birth defect.

Getting accurate information about Zika out to the public has been a multi-government agency effort.

“County staff has been meeting regularly with the Manatee County Department of Health to discuss how to get their message about the disease to as many people as possible,” said Nicholas Azzara, information outreach manager for the Manatee County Administrator’s Office.

“We decided one way we can help is through an insert in the monthly utility bill envelope,” Azzara said. “Another way we’re going to help is with an information flyer that will be distributed at various locations, such as the county libraries.

“The county board of commissioners wants to provide a broad number of channels as possible to reach people with the health department’s message,” he said. 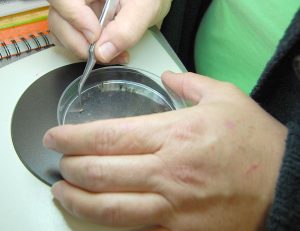 After mosquitos are trapped, they are counted and identified by species in the Manatee County Mosquito Control District entomology lab to help decide what areas of the county need to be treated.

Latham said educating the public is a major part of the mosquito control district’s mission.

Throughout the year, district employees attend various events and fairs to inform residents on effective methods they can use to reduce the mosquito population in their yards.

Latham, who graduated from Cambridge University in England with a degree in natural science, always knew he wanted to work in the public health field.

He had five years of experience in the Cayman Islands, before moving to Miami and working there for nine years for the mosquito control agency.

Although the Zika situation is serious, Latham said government agencies have a fine line to walk.

For more information about the Manatee County Mosquito Control District visit the website at manateemosquito.com.