released 42 years after his death 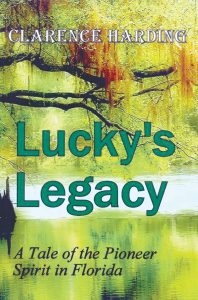 Born in 1898 in Brandon, Fla., Clarence Harding was an integral part of his community. He was devoted to the preservation of Florida history, and his book, Lucky’s Legacy, is a compelling and informative tale of pioneer life in the area he loved.

Forty-two years after Harding’s death in 1974, one of his daughters, Carleen Brameister, ensured that his dream of publication became a reality so that others could enjoy and learn from Harding’s tale of Dave Lucky and his family.

Harding loved promoting the history of Hillsborough County and the surrounding area and appreciated the pioneer spirit that led to its settlement and development. A commercial fisherman who also contributed articles to local newspapers including The Observer News, he crafted the tale of the Lucky family and their neighbors, settlers of the late 1800s. Based on his own family and other locals in the community, Harding highlighted the resourcefulness and resilience of those determined to develop the area. Whether they were killing and skinning gators, plowing and planting in swamplands, or surviving hurricanes and disease, the family refused to give up their dream of cultivating their own little piece of an area they thought of as paradise.

An engrossing must-read for Hillsborough County residents whose roots extend back several generations as well as new residents, Lucky’s Legacy is Clarence Harding’s parting gift to the people of southwest Florida.

This pioneer story offers an insightful glimpse into the world of the mindset of settlers as well as an understanding of the local culture and environment.

Lucky’s Legacy, by Clarence Harding, is available in paperback and eBook from Amazon, Barnes & Noble, iBooks and other major retailers.