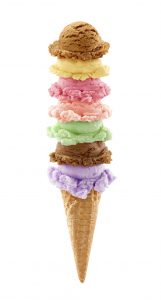 If July felt blistering hot to you, you were not alone. NASA and the National Oceanic and Atmospheric Administration (NOAA), two leading global authorities on climate, both reported that July 2016, was not only the hottest July on record, but the most sizzling month in the history of record keeping.

One way locals have found to combat the heat wave is to stop in Kimi’s Ice Cream and Coffees in Apollo Beach, owned by Jay and Adam Souza, and sample their selection of frozen treats. With hot new summer flavors (and by that we mean cold) like Salty Caramel, Panda Bear and Peanut Butter Swirl, young and old alike find refuge from the weather in this refreshing air-conditioned shop filled with colorful tasty sweets.

“We stop in here a few times a week,” said Ronnie Psimas, whose daughter Alayna, a kindergartner at Apollo Beach Elementary, was getting ready to dip into a scoop of Mint Chocolate Chip ice cream. “She loves it here, and it gives us a nice break from our day too.” Psimas works as a dental products sales representative and his wife Christina is an RN at the Moffitt Cancer Center in Tampa.

“Adults really like the Bourbon ice cream,” said owner Adam Souza, who was busy serving up scoops of the 21-and-over flavor to a couple of neighbors from Sun City Center. “For the kids, our Creamsicle is one of the most popular summer flavors — it’s like sherbet on a stick.” 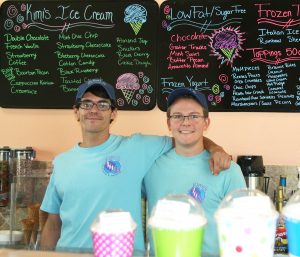 Striving for a fun family atmosphere that caters to kids of all ages, the Souza family started out in the food and specialty coffee service business more than 20 years ago. Now Kimi’s offers more than 43 flavors of Working Cow Ice Cream and more than 25 different sauces and toppings, along with a world-class coffee service complete with espresso, cappuccino and tea. “We have everything you need to create a personalized dessert masterpiece,” said Souza.

Tampa was not alone in breaking heat records this summer. The latest statistics are just a continuation of the global hot streak that scientists blame for the extreme weather events that have marked the last several years, including a record-breaking cyclone season, flooding, and severe droughts and fires. “It’s scorching hot out there,” said Souza, who opened Kimi’s nearly two years ago with his brother Jay. “I don’t think people realize how hot it actually is.”

Scientists attribute part of the hot streak to El Niño, a phenomenon characterized by warmer-than-usual sea surface temperatures in the equatorial Pacific, and capable of changing weather around the globe. Last year saw “one of the strongest El Niño events the globe has experienced since at least 1950,” according to a NOAA report. Gavin Schmidt, director of NASA’s Goddard Institute for Space Studies, said that it “appears almost a certainty” that 2016 will go down as the warmest year on record.

These weather occurrences have naturally raised concern over the global effects on animal and fish species, widespread coral bleaching and extreme climate changes. As expected, 2016 has seen some disastrous events, including wildfires in California and flooding in West Virginia, Texas and Louisiana. 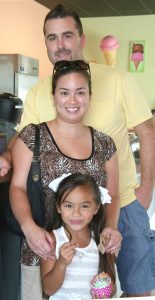 The high daily temperatures in the Tampa Bay area are forecasted to raise the heat index (or “feels like temperature”) to as high as 112 degrees. Despite the heat, many Floridians still spend weekends at the beach, sport games or water parks. “Sure it’s hot,” said one Kimi’s customer who was dipping into a cup of Blueberry Cheesecake ice cream, “but it’s nothing we aren’t used to.”

Experts recommend avoiding heat exhaustion with good hydration, nutrition, rest, limiting exposure to the sun and changing exercise cycles to account for the extreme heat. For students returning back to school this month, it’s recommended that precautions be taken not to get overheated in sports practices. (And a Chocolate Chip ice cream cone from Kimi’s wouldn’t hurt either.)

Kimi’s Ice Cream and Coffees is located at 143 Harbor Village Lane in Apollo Beach. For more information, call 813-645-2038, or visit them at kimisicecreamandcoffees.com.