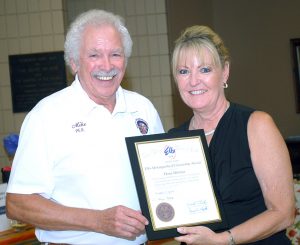 LARRY BRIGANT PHOTO
Representing the Grand Lodge of the Benevolent and Protective Order of Elks and South Hillsborough Elks Lodge 2672, Past Exalted Ruler Mike Kent poses with Kings Point resident Dana Dittmar after giving her the Elks District Citizenship Award, one of the organization’s highest recognitions, at the Wimauma Convention Center Aug. 18.

The Grand Lodge of the Benevolent and Protective Order of Elks and South Hillsborough Elks Lodge 2672 recently acknowledged Kings Point resident Dana Dittmar for her “outstanding and meritorious service to humanity.”

Dittmar, 58, received the Elks District Citizenship Award at the Wimauma Convention Center Aug. 18, at the monthly luncheon of the Sun City Center Chamber of Commerce, of which she is CEO. The presentation was made by Mike Kent, who was Elks Lodge president through April of this year.

“As Past Exalted Ruler, I nominated her for the award,” Kent said. “Every now and then I get to do something fun like this, and I couldn’t think of anyone more deserving.

“The award is one of the highest recognitions we make,” he continued. “The local lodge presents the award on behalf of the Grand Lodge, which nationally has more than a million members.”

Kent said he met Dittmar when he was a member of the Sun City Center Security Patrol, where she has driven bimonthly for the past 18 months. He became increasingly aware of her involvement in the community at numerous organizational luncheons they both attended and through local newspaper coverage of her volunteer efforts.

“I saw her as an outstanding member of the community, a really caring person who was willing to get involved and get things done,” Kent said.

“To me it’s really simple,” said Dittmar, about why she gets involved. “This community is my home, and we should all take care of our home. I think everyone has a responsibility to give back to the community they live in.”

Dittmar said she was surprised when she heard she would receive the award.

“I don’t do these things for the recognition,” she said. “But I do appreciate when an organization I respect like the Elks takes the time to notice. That means so much to me.”

Dittmar, who has a bachelor’s degree in corporate communication and a master’s degree in cultural studies, has served the chamber as CEO for more than five years. During her tenure, the nonprofit business organization has grown from 260 members to almost 500. Through a number of projects that she initiated, the chamber building — which is used by the public and members alike — secured a new roof and flooring, repaved the parking lot and updated banquet room furniture.

Before coming to the chamber, Dittmar’s experience included roles as marketing director for South Bay Hospital and representative of the Small Business Administration for Florida, Georgia and South Carolina.

She moved to Sun City Center with her husband, Kevin, in 2002.