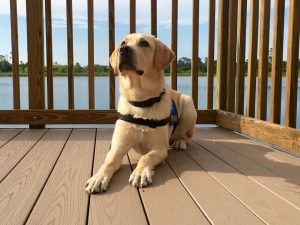 Six months ago, a special puppy named Scout came to live with Chris O’Leary and Chip Barker at their home in Apollo Beach. Only 4 months old at the time, the 33-pound Labrador retriever was “on loan” from Southeastern Guide Dogs, where he was bred to one day transform the life of a sight-impaired person.

O’Leary and Barker are his volunteer puppy raisers. As such, they’ve given Scout a loving home and readied him for formal training by socializing the pup, giving him confidence and teaching him basic obedience skills. Since February, Scout has been exposed to countless real-world situations: Road trips to numerous hotels, lunch in downtown Disney, weekly shopping at Publix and afternoons at the movies, all of which teaches the growing puppy to keep focused no matter what’s going on around him. 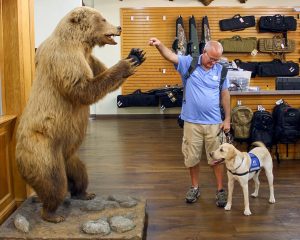 CHIP BARKER PHOTO
One of the things a volunteer puppy raiser must do is provide a potential Southeastern guide dog with all kinds of real-world experiences. Here Chris O’Leary and Scout visit Shoot Straight in Tampa, where the puppy is exposed to the smell of taxidermied animals, which some dogs do not like.

“Scout is very social,” O’Leary said. “Everything’s exciting to him. He’s so eager to perform tasks and eager to please. And he has the best house manners of any of the 30 puppies I’ve raised since 1997.”

A Southeastern Guide Dog puppy normally goes to live with volunteer puppy raisers when it’s 8 to 10 weeks old. But Scout came to O’Leary and Barker at the age of 4 months, after initially going to a home in West Palm Beach where he had developed digestive issues from chemicals used on a nearby golf course. Everyone involved agreed he should be returned to the school and reassigned. The issue cleared up upon his relocation.

In mid-November, when Scout becomes almost 14 months old, he will return to the Palmetto-based nonprofit and move on to the next phase of his development. Although still a puppy, he’s much more mature than most dogs his age.

“Only 40 percent make it (through the six months of guide dog harness training),” Barker said. “But if he doesn’t, he’ll be trained for a different job.”

That could include a career as a disabled veteran’s service dog, facility therapy dog, breeder, public service or bomb and arson dog, school ambassador or emotional support dog. Through Southeastern’s Canine Connections program, Scout could also be assigned as a pet to work with a visually-impaired child, who is too young to receive a guide dog but needs to learn how to care for one. 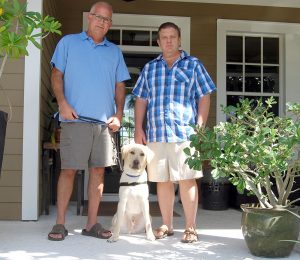 LOIS KINDLE PHOTO
Chris O’Leary, left, and Chip Barker consider puppy raising a labor of love. Both realize Scout isn’t really their dog but consider him a family member for the time they have him. Their role is to prepare him for bigger things.

Until recently, people have been allowed to pet Scout while he was wearing his blue Southeastern Guide Dog coat. But those days are over, Barker said. Now, 10 months old and weighing 66 pounds, Scout has learned the coat means he’s going to work, so petting isn’t part of the job. When the coat comes off, he’s just like any other dog. 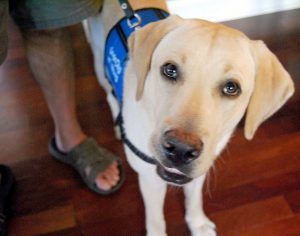 LOIS KINDLE PHOTO
A Southeastern Guide Dog puppy normally goes to a volunteer puppy raiser when it’s 8 to 10 weeks old. But Scout came to O’Leary and Barker at 4 months old after experiencing a health concern at his first home in West Palm Beach.

Recently Scout went with his keepers to stay at two different hotels in Naples. (Barker is a travel agent and makes these trips to check out potential accommodations.)

“No matter where we went, he waited patiently in his coat,” O’Leary said. “At breakfast one morning, a lady sitting no more than two feet away from us said she didn’t even know he was there until we got up to leave.

“That’s what we like to hear,” he continued. “It’s the ultimate puppy-raiser compliment.”

Scout recently attended what is officially known as “Puppy Camp,” where he went to stay for two weeks with another puppy raiser who evaluated his progress.

The woman, Lisa Brekke — a St. Petersburg Fire Rescue trainer — took Scout to work with her at a fire station, where he experienced lots of activity and noise. He even learned to be around cats. 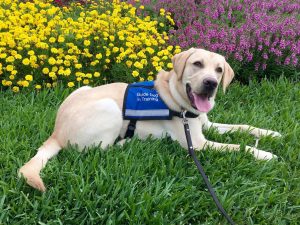 CHIP BARKER PHOTO
Scout, a 10-month-old Labrador retriever puppy bred by Southeastern Guide Dogs in Palmetto, is being raised by Chris O’Leary and Chip Barker, of Apollo Beach. They have been teaching him basic obedience and socialization skills, readying him for formal training as a future guide dog for a sight-impaired person.

“Scout did really well,” said O’Leary, as he reviewed Brekke’s written report. “We will continue working with him on areas mentioned in the assessment, things like leaping towards other dogs on walks and becoming excitable when he meets people.”

“The camp gives us a fresh set of eyes and alerts us to things we don’t necessarily see because we’re with Scout all the time,” Barker added.

All of these experiences are geared toward the day Scout goes back to Southeastern Guide Dogs.

“Over six weeks at our Canine Assessment Center, we will get a snapshot of who he is,” said Glenna Fiddyment, manager of the school’s genetics reproduction and canine assessment programs. “There is no pass or fail. The goal is to determine what career Scout is suited for, what he most enjoys doing.”

During his assessment period, Scout will go to the school’s medical center for exams, X-rays and medical clearances. Then he’ll get enrichment activities with volunteers and learn to live in a kennel environment.

His temperament, how he reacts to different stimuli and noises and how well he does with new experiences will be evaluated.

After two weeks of adjustment, Scout will meet his official guide-dog instructor and begin six months of formalized harness training. He will learn 40 commands involving the word “find,” including “find the light switch, find my shoes, find the door.” 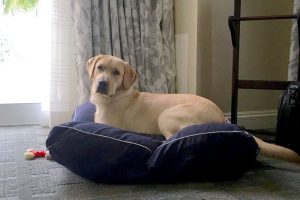 CHIP BARKER PHOTO
Scout rests on a luxury dog bed in a pricey hotel in Naples during one of the field trips his volunteer puppy raisers take to train him to be comfortable in all settings. He was so good on this particular trip that other guests barely knew he was there.

And he will learn perhaps the most important skill of all — intelligent disobedience.

“He’ll not only learn how to get his owner safely to where (he or she) needs to go, but also when he must disregard the command, ‘forward,’” Fiddyment said.

That’s what keeps the owner/handler from doing things like stepping into traffic or off a pier, when the dog knows it’s not safe to do so, she said.

When Scout is fully trained for his future vocation, his puppy raisers will be invited back to the school, where they will meet the dog and its new owner.

After that, contact is prohibited for 90 days but if the owner consents, the puppy raisers can keep in touch.

For additional information on Southeastern Guide Dogs, becoming a puppy raiser or other volunteer opportunities, call 800-944-3647, or visit guidedogs.org. 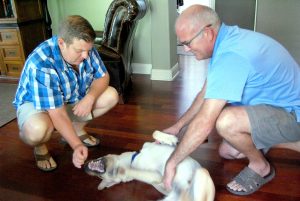 LOIS KINDLE PHOTO
Part of being a puppy is plenty of playtime and affection, which volunteer puppy raisers Chip Barker, left, and Chris O’Leary are shown here providing to Scout. 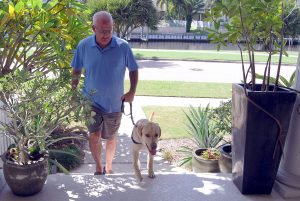 LOIS KINDLE PHOTO
O’Leary and Scout return to their home in MiraBay after a walk around the neighborhood. His raised head is significant for his future vocation if he is one of the 40 percent of Southeastern’s dogs who actually becomes a guide dog. If he doesn’t qualify, Scout will have another important vocation. 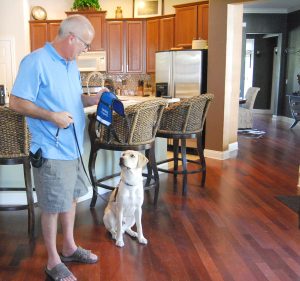 LOIS KINDLE PHOTO
Now 10 months old, Scout knows its time to go to work when O’Leary brings out his blue Southeastern Guide Dogs’ coat, which now means he can’t be petted when he’s wearing it. The puppy enjoys taking commands, an important trait that will serve him in his future career.