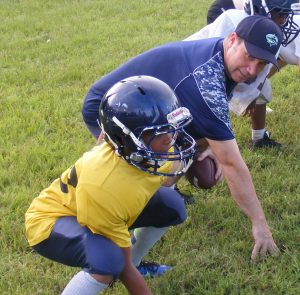 Without naming names, let’s just say most of the children on the SouthShore Sharks Athletic Club Inc., wouldn’t get to play sports if not for the dedicated work of many volunteers.

“Do you know it costs more than $250 to join some of the local leagues, and then you still have to pay for the suits and helmets, which can be more than $75?” asked Josiah Davis, a Ruskin resident, who is a Navy Chief at MacDill AFB in Tampa by day and spends most evenings helping kids from 4 to 15 years old play football and cheer.

“Some just can’t afford it, and then there’s the problem of getting to the fields,” interjected Tony Watkins, another volunteer and member of the 13-person board. “We go from Wimauma to Ruskin, to Apollo Beach, to Gibsonton and parts of Riverview to pick these kids up.”

When both parents work, or a child lives in a single-parent home, they have no way to get to the fields without this help.

“We pack kids on bags and bags on kids,” joked Davis.

But actually, getting to the fields is no joke. 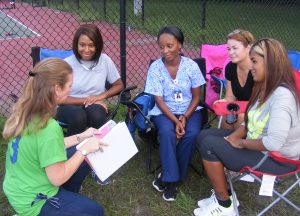 Although Davis fought for a solid year to get 501(c)3 nonprofit status for the club, it still has no field of its own and has to rent fields from other leagues every practice and game.

“We’ve gone as far as St. Pete to play,” said Watkins, who serves as the president for the club.

“We started with about 60 kids,” said Davis. “Now there’s more than 130 and at least 50 percent of them are ‘sponsored’ or at least are only paying half of our fee, which is less than half what the other leagues charge to take part.”

One family has 12 children who are involved, he added.

According to Jen Tracy, who is a Team Mom, the entire league is like family.

“Jen does whatever job is necessary,” said Watkins. “She and her husband Bill pick up hot dogs, whatever we need at the time. We can just call them while they’re on the road and ask.”

Watkins said hot dogs figured into the “making of the league.”

“It was funny,” he said in between working with his boys. “When we first saw a need, we went around to different parks and met with kids. Out in Wimauma, the kids seemed to stay away from strangers, so we started taking hot dogs out there, cooking them on the grill and giving them away. Three weeks later, we had our Wimauma kids.” 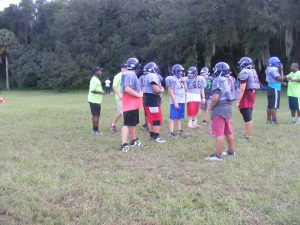 Josiah Davis, far left, athletic director and senior team head coach for the SouthShore Sharks Athletic Club Inc., drills the senior team for its next game. An active duty Navy Chief at MacDill AFB in Tampa, and resident of Ruskin for 19 years, Davis saw a need for the children all over South County from Wimauma to Riverview and together with a few willing volunteers from the base and the communities, began the club and worked for a year to get it approved as a 501(c)3 nonprofit (tax deductible) organization. Those who work with these 4 through 15 year olds say most of them could not participate in sports before due to two things: Transportation to practice and games; and the cost of uniforms. This group is reaching out to individuals and organizations and have already had some recognition from the Tampa Bay Buccaneers.

All the volunteers do whatever they can when necessary, Watkins explained.

Jason Titus — another board member — even rigged up what he called “a redneck air conditioner” to help with the unbearable heat one day. Ice, fans, generator, whatever it took.

There was a foster home with several children the league board members thought would benefit from joining teams, but it took Watkins’ sitting through six months of Guardian Ad Litem training for the Department of Children and Families to allow it.

He did; and now foster children can play as well. 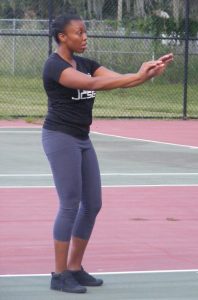 PENNY FLETCHER PHOTOS
Tymika Logan who is on active duty at MacDill AFB in Tampa and has been on two tours in the Middle East, uses her spare time to lead the girls’ cheerleading squad of the SouthShore Sharks Athletic Club.

“We all do whatever it takes to keep things moving,” said Paula Knight, a local mom whose children are involved. Knight volunteers as the team’s “business manager” and also interacts with the other moms asking what they need and what they think would benefit their kids. “I borrow, barter and beg for whatever we can’t afford.”

The day I interviewed the club, four moms were eager to talk about the family-like atmosphere.

Oquicha Mattox, Nicole Smith, Jessica Cuello and Crystal Davis — who is a nurse and stays ready to help in case she is needed on the field — couldn’t say enough good things about the way it was working out for their children.

“We have them 4 to 15 [years old],” said Smith. “First there’s Pee Wee, then Flag, then Mighty Mites and finally Senior.”

Some of the boys on the Senior team, although only 12 and 13 years old, were big enough to play on high school teams. These teams play “for real,” often under military-like precision tutelage.

Tymika Logan is back from her two tours in the Middle East and is in charge of the girls’ cheerleading. On active duty at MacDill AFB, she spends a lot of her free time on the field.

The volunteers credited several locals with helping the club: Commissioner Stacy White, who helps them with contacts; Bell Creek Academy in Riverview, that allows them to use their equipment; and Courtney Campbell who is their liaison with the Tampa Bay Buccaneers.

“We had a boy who got shot in the leg,” said Watkins. “Damion ‘Chum’ Escobdo. The Bucs gave him a real treat. A lot of time and a tour of their field.”

But the help they need most right now is a permanent home.

“We need a field of our own,” the board members present for the interview all agreed. “All we need is some land donated to this cause. It would mean the world to the boys and girls because we have to haul our equipment around in the car because we have no storage.” 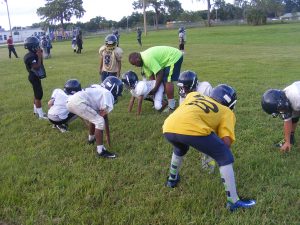 Tony Watkins lifts the legs of the younger boys to show how their stance should feel when they are positioned correctly.

It costs between $215 to $220 to completely suit up a boy for football, and then there are the fees they must pay to use the fields, like Vance Vogel in Gibsonton and the Riverview Park.

To find out more about the club, how to volunteer, donate or perhaps offer them a permanent home field, visit their website at sharkathleticclub.com.

Because they have 501(c)3 status, any help given is tax-deductible.