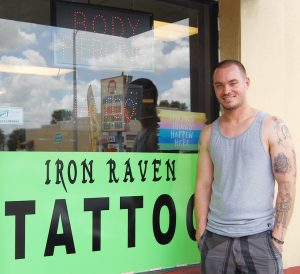 Tucked back off the busy main street of Palmetto, the Iron Raven Tattoo shop has become a popular spot for area residents to get their ink fix.

Mathew Haines, 24, bought the existing business at 813 Eighth Ave. W. in May with his business partner, Mike Csanki.

“I purchased Iron Raven when I heard it was for sale,” said Haines, who also owns with Csanki the Sacred Rite Tattoo shop on U.S. 41 near Florida Boulevard in South Manatee County.

“We didn’t want to risk someone else buying the business,” he said. “We eliminated any competition.”

Haines got into the tattoo business about a year ago, after serving in the U.S. Army for five years as a combat medic, when he and Csanki opened Sacred Rite.

He said he was always interested in tattoos since getting his first one when he was 18 years old and now has at least 12.

“The taboo is fading with every generation,” Haines said. “Youth today have different moral values.

The tattoo on the right forearm of Megan Ryan memorializes the time of birth of her daughter, Nova Starr.

Tattoo artist Orlando Socarras, who has a station at Iron Raven, said the popularity of body art is no longer an expression of a mid-life crisis, but a way of life.

“The main idea of a tattoo is to memorialize a time in your life,” said Socarras, who has been a tattoo artist for four years.

He said tattoos that are a memorial or family-related are his favorite designs to do, because they have a meaning behind them.

“Then there are people who from time to time want to add art to their body,” he said, “like when an older person wants to experience something and wants to put it on their body.”

Socarras said he has been drawing since he was 3 years old.

“Everyone says you never make money in art, but there’s always a way,” he said. “I found mine in tattooing.”

Another tattoo artist at Iron Raven, Manny Lopez, also said he has been drawing since he was a young boy.

“I came up in a family where my older stepbrothers were rebellious and would tattoo each other,” said the 30-year-old.

“Being mechanically inclined,” Lopez said, “I built a tattoo machine at 13 and fixed my stepbrothers’ mistakes.”

This could be why his favorite types of tattoo are coverups.

“They’re the hardest to do,” said Lopez, who has been tattooing professionally for 12 years. “They’re very challenging.” 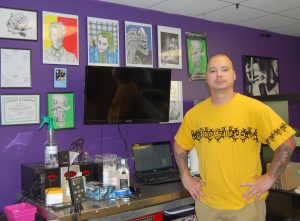 Tattoo artist Orlando Socarras, who has been drawing since he was a young boy, stands in front of some of his artwork on the wall at Iron Raven Tattoo shop in Palmetto.

A coverup is a tattoo designed to disguise an older tattoo that is no longer wanted.

It was a coverup that brought Megan Ryan into the Iron Raven recently.

Ryan wanted Lopez to cover an old tattoo of the name of someone who was in her life at one time, but not anymore. 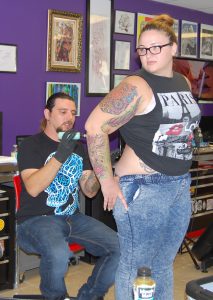 Tattoo artist Manny Lopez prepares to do a cover-up tattoo on Megan Ryan’s back.

“I’ve been going to Manny for four years,” said the 22 year old. “He has really clean lines, and I like his technique.

“And I love when he puts his touch into it,” Ryan said.

She got her first tattoo, a small flower on top of her foot, when she was 15 years old.

Since then, Ryan has not stopped.

“It’s very addictive,” she said. “Most have a background meaning.”

For example, the large, colorful tattoo of a rose and clock with the hands at 2 and halfway between the 6 and 7 was done to commemorate the time her daughter, Nova Starr, was born: 2:38.

Ryan said both of her parents were not too happy when she got her first tattoo, but they got used to it. 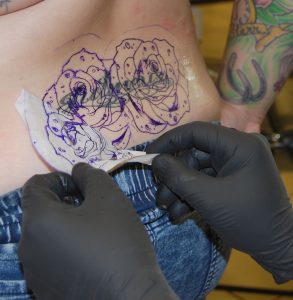 Tattoo artist Manny Lopez removes a design transfer from Megan Ryan’s back to guide him as he does a cover-up tattoo over an older tattoo.

“They appreciated the one for my baby,” she said. “And then I got a portrait of my brother who passed away seven months ago, and when my father saw it he loved it.

“Now he wants to get one,” Ryan said.

“The tattoo industry has changed dramatically in the last 15 years because it has become more accepted,” Lopez said.

“When I was growing up it was kind of scary walking into a tattoo shop,” he said. “They used to be dark and dingy, and had a very biker atmosphere.”

Now they are run more professionally, are clean, well lit and friendly places where you would not mind spending time, Lopez said.

He said it was about 10 percent of his business and usually for the younger generation. 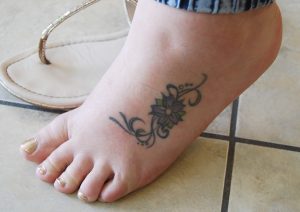 Megan Ryan got her first tattoo, a flower on her foot, when she was 15 years old.

“Our body piercing clientele is a lot of college kids,” Haines said. “Tattoos are really expensive so piercings are an affordable way to express themselves.”

To illustrate, a septum piercing costs $30 as compared to a small tattoo, which runs about $50 minimum for a simple design with no detail or color, he said.