South Shore actors to sing their hearts for Alzheimer’s research 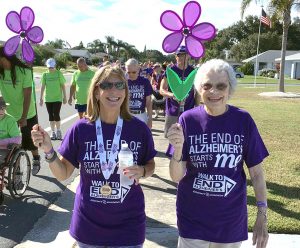 COURTESY PHOTO of ELLEN KLEINSCHMIDT
Ellen Kleinschmidt, left, participates in the 2015 Walk for a Cure with her mother, Ginny Zweig, 84, who was diagnosed with Alzheimer’s eight years ago. Kleinschmidt says she performs in benefits like “Unforgettable” to fund Alzheimer’s research so that one day the world will be free of the disease.

Residents who enjoy Broadway show tunes can get their fill at an upcoming Actors Against Alzheimer’s presentation called “Unforgettable.”

Advance tickets are on sale now at both churches. The cost is $15 if purchased ahead and $20 at the door. Credit card orders can be made by calling 813-789-8271 or online at brownpapertickets.com by entering Actors Against Alzheimer’s – Unforgettable in the search box.

“Unforgettable” is an annual benefit concert to raise funding for the Alzheimer’s Association, which is seeking to end the devastating disease. The performers include MOTHERS & SONgS, a multigenerational quartet of, as the name implies, mothers and sons: Ellen and Brian Kleinschmidt and Teri and Alex Council. Their special guests will be Mika McGee-Kleinschmidt, a popular local singer/actress, and the Cabaret Kids, a talented troupe of theater teens that formed specifically to perform at concerts for a cause.

Snacks and beverages will be sold before each show and during intermission. All proceeds will go to the Alzheimer’s Association.

“We’ll be singing Broadway show tunes, some familiar and some new,” Ellen Kleinschmidt said. “These will include ‘Unforgettable,’ of course, ‘Don’t Mean a Thing,’ and songs from Chorus Line, Oklahoma, Catch Me if You Can and more.

Act I will include The Cabaret Kids, who will perform contemporary Broadway show tunes, “with a standard or two thrown in,” Kleinschmidt said. MOTHERS & SONgS and McGee Kleinschmidt, who will sing “Maybe This Time” from Cabaret, will hit the stage during Act II.

MOTHERS & SONgS was formed last month for the Freedom Plaza Walk to End Alzheimer’s team. An estimated crowd of 200 attended.

Actors Against Alzheimer’s is seeking sponsors to help the group reach that goal. Every cent raised goes to the Alzheimer’s Association, a 501(c) 3 nonprofit organization. Additional donations will be accepted at both events are tax-deductible.

Ellen’s mission is personal. Her 84-year-old mother, Ginny Zweig, who survived breast cancer, was diagnosed with Alzheimer’s eight years ago and is cared for by her father, Roger, 85.

“I do this for my parents, for caregivers and those living with this disease,” she said. “But more importantly, I’m walking and singing for my sons and grandchildren who will hopefully live in a world where Alzheimer’s doesn’t exist.”

According to the Alzheimer’s Association, Alzheimer’s is a type of dementia affecting a person’s memory, cognitive skills and behavior. It’s a progressive disease that gradually worsens over time, eventually affecting motor skills and making it difficult for individuals who have it to walk, sit and even swallow. Currently there is no cure.