HCSO: Community policing at its best 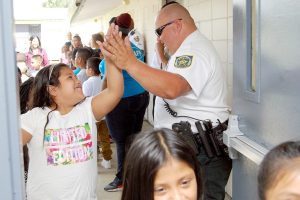 Hillsborough County Sheriff’s deputies from the Dist. IV command spent a recent afternoon hanging out with a bunch of kids.

They handed out free backpacks filled with school supplies to 89 children from low-income families and did some one-on-one relationship building at the Boys & Girls Club in Wimauma, while the youngsters enjoyed pizza, cake, fruit and other after-school snacks.

“The sheriff’s philosophy is to try and reach young children in low-income areas and provide them with positive interaction with the police,” said Maj. Rob Bullara, Dist. IV commander. “Through events like this one, we want them to know the police aren’t always coming to arrest someone. It’s an example of community policing at its best.”

Over the past 30 days, Dist. IV deputies and members of the community donated school supplies for the backpacks, which were largely supplied by members of Deputy Joey Kaleikini’s CrossFit Rikr gym at 6520 U.S. 301 S., Riverview. 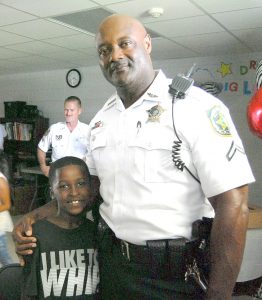 Master Deputy Harold Hoskins poses for a picture with a delighted Harece Carrie, 7, at the HCSO’s recent backpack giveaway at the Wimauma Boys & Girls Club.

“We’re so grateful for the support and partnership of the Hillsborough County Sheriff’s Office,” said De’Anna Irizarry, who was recently promoted to supervise five HCSO-sponsored Boys & Girls Club sites: At Bethune Park in Wimauma; Town ’n Country; the Freddie Solomon club at 50th Street and Sligh Avenue; the Winston Park club near the Clair-Mel City/Palm River area; and Dover. “Most of these children live below the poverty line and wouldn’t have school supplies and a backpack without this effort.” 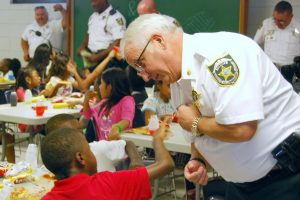 Maj. Rob Bullara, Dist. IV commander, shows his service bar to an inquisitive Lavonte Carrie, 9, at the Wimauma Boys & Girls Club Aug. 12. The major described such events as “community policing at its best.”

Irizarry said the Wimauma club opened for its first summer session at Bethune Park in June 2015, and the Sheriff’s Office assumed the building lease last December.

Dist. IV staff members have been involved in small ways ever since.

“We found out they didn’t have a Christmas tree so we got one, fully decorated, donated by (The) Home Depot,” Bullara said. “Over the summer we had a deputy there full time Monday through Friday, and now that school is in session, we’re checking in and out.”

“The backpack giveaway was the first large event we’ve been involved in,” he said. “Our involvement is a work in progress. I’m sure it’s going to grow.”

The Wimauma Boys & Girls Club at Bethune Park is at 5809 Edina Street. It offers the following programs for school-age children after school from 2:45 to 6 p.m., Monday through Friday and during the summer from 7:30 a.m. to 6 p.m. 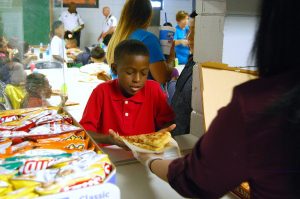 Lavonte Carrie, 9, gets a piece of pizza as part of his after-school snack at the Wimauma Boys & Girls Club Aug. 12.

“This semester we’re also including Youth for Unity, which involves teaching our children about diversity,” Irizarry said.

The only cost for the entire program is a $25 registration fee per child per semester, she said.

For additional information, to volunteer or to make a tax-deductible donation, call 813-938-1839 or email dirizarry@bgctampa.org. 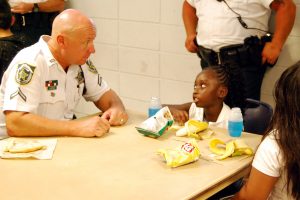 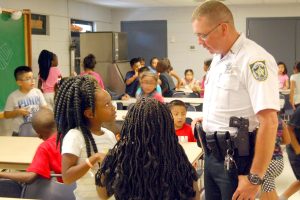 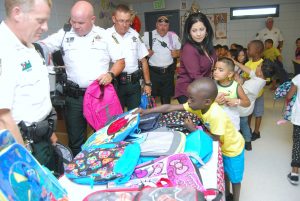 Tyree Walker, foreground, and Jeremiah Camargo, both 6, lead other school-age children from low-income families in the Wimauma area to pick out a free backpack filled with school supplies from Hillsborough County Sheriff’s Office deputies from Dist. IV.