Shuffleboard for a new generation 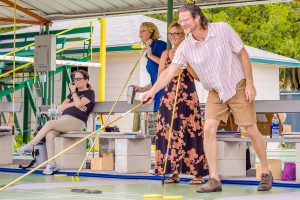 ANDREA SHAY PHOTOS
Members of the Bradenton Shuffle Social Club prefer a laid-back style of play where the emphasis is on socializing rather than advancing to a tournament. Members often meet up at one of the local breweries afterward.

Although shuffleboard’s been around for over 500 years, popular interest in the game had, until recently, fallen into decline. Now the game’s enjoying a resurgence among millenials and hipsters who find it a low-key way to relax and have a good time.

In April this year, Realize Bradenton held a pop-up shuffleboard event as part of their “PopUps for a Purpose” event series. The event drew nearly 100 people, and out of it the Bradenton Shuffle Social Club was born.

The club is made up of participants of all ages, and they currently meet on a monthly or semi-monthly basis. The club emphasizes socializing over playing for sport; they play for fun rather than for tournaments or league games. Martha Bennington, who was instrumental in the formation of the club, describes their shuffleboard nights as “fun and funky.”

“People can get into the sport if they really want to,” she said, “but more often than not, people come to the group who prefer to ‘just be silly’ and have drinks, socialize with neighbors and simply have fun.” Many of the group’s regular members like to dress up in vintage clothing complete with over-the-top hats or fancy shoes. 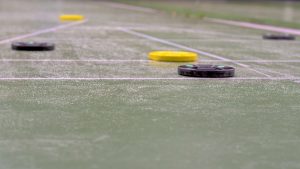 Shuffleboard is currently undergoing a resurgence among young people and hipster types who seek a fun, easy-going environment in which to play and socialize.

They currently meet at the Bradenton Shuffleboard Club on Ballard Park Drive. Bennington said the group’s biggest goal is “to utilize this great community asset that’s so close to the Village of the Arts, and the brewery district and is within walking distance from downtown.” She describes their events as “a multi-generational experience” where “everybody knows everybody.”

Currently the group remains small because a number of members are away for the summer, but in the fall, Bennington says, the group hopes to have a big social event as opposed to a meet or tournament. “If we can grow our numbers enough, we can have a food truck and a DJ,” she adds.

The Bradenton Shuffle Social Club is actively recruiting members and offers reasonable rates to join, which helps to pay for facility costs. Memberships for single adults are $30, or $50 for doubles teams. The group also offers community members the option to come for one night and pay just $5 for the event, and that $5 can go toward a future membership. 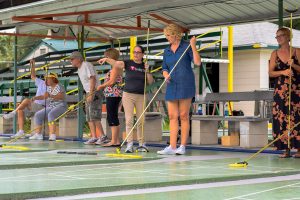 Shuffleboard has been around for over 500 years. The Shuffleboard International Association was formed right here in Florida in St. Petersburg in 1979 — at the height of the game’s popularity.

Bennington wants to encourage people to join or come to an event night with an open mind. “People have this misconception of what it’s going to be like,” she said, addressing concerns people may have that shuffleboard is strictly for older generations or that it’s boring or outdated. “Most of the people [at event nights] are in their 30s or millenial.”

The Bradenton Shuffle Social Club usually holds its events from 6 to 9 p.m. Their next night out is scheduled for Saturday, Aug. 20, though they hope to add more events as the season picks up. 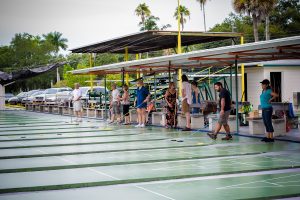 Founding members describe the group as “multi-generational,” a social community made up of members who like to have fun.