ClubLink on the way to solving Kings Point’s ‘jungle’ problem

ClubLink on the way to solving 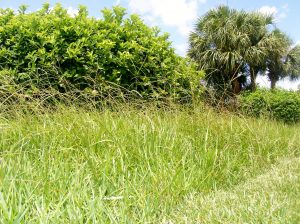 Backyards in the Andover condominium section of Kings Point, and other areas along that part of a beautiful flowing river, have been the reason many residents have chosen to buy there.

“I spend time in the mornings having my coffee on the back porch just looking at the river and the large variety of beautiful birds that come here,” said Norm Jacques.  “The maintenance used to be wonderful. Just look at these pictures,” he said, pulling out a stack of 4-by-6 prints. “But now, the grass grows up really, really high and I just paid someone out-of-pocket $80 to trim the bushes behind my house.”

Jacques and his wife Elizabeth moved to Kings Point in Sun City Center from Apollo Beach nearly 20 years ago and Norm, a former civil engineer, served as president of his section’s homeowner’s association for many years.

“We pay $450 maintenance each month, so I don’t feel I should have to pay extra to trim bushes,” he said.

Of course, as explained by Kings Point management, the fee covers more than aesthetics like lawn service. It also provides for the recreational buildings and facilities, other amenities, the security at the gate, cable service, trash pickup and more.

But Jacques was certainly not alone with his complaint. This has been the case for many Kings Point residents since the former developer WCI sold its golf courses to ClubLink and ClubLink closed the courses.

But the problem along the river called for a solution — and quickly — explained by some other residents.

Marina Naples, 56, bought a condo at the other end of the river from the Jacques. She and her husband only spend winters here now, and rent the condo for the rest of the year. “We had hoped to maybe retire there someday, although we are not ready to do that just yet,” she said.

“We bought on a beautiful golf course that no longer exists,” she said. “When we were there recently, an alligator got hold of a dog. What upset me most was that no one threw things at it, or tried to save it.”

The Jacques have also seen an alligator near their home since the high growth began.

“We have a dam up by the closed clubhouse (to the defunct golf course) and have ever seen a gator that close before,” said Elizabeth Jacques.

Recent complaints have brought the situation to a head and it seems the problem is now on the way to be straightened out.

The Kings Point Federation is contracted with First Service Residential to run the maintenance, and they hired Mainscape Landscaping of Riverview to do the areas behind the buildings where Jacques and Naples live. Mainscape, however, may not be responsible for the area right up to the river, even though they have often cleared, mowed and cut brush there anyway.

Two weeks ago, Matt Permuth, who was formerly Kings Point’s Operations Manager, and is now with ClubLink, found out about the problems. Permuth immediately began to research the agreements that spell out who is responsible for the maintenance of the land across the river from the closed-down golf course which is, and has been kept in, excellent condition.

When made aware of the complaints, Permuth sent his crew from ClubLink to clean up the area on the other side of the river.

“I have to go through the agreements and find out who is supposed to do what, but meanwhile we’ll fix the immediate problem,” he said.

“One of the reasons I was just given this job was to fix whatever is wrong with golf here,” said Permuth. “Golf is a dying sport. Read the national reports. That’s why all these courses are closing.”

If that can happen in a retirement community, it makes sense it can happen all over, he added.

Meanwhile, the area behind the Jacques and Naples homes is now clear for birdwatching during their morning coffee hour. It no longer has the look of a jungle and no alligators have been seen.

In fact, the view now looks quite a bit like it did when these residents and others along the river first bought their property.