A birthday and two anniversaries

Retired U.S. Navy Commander Edward Socha turned 95 years old on Friday. He is the last known Pearl Harbor survivor in the area. He did more than just survive. He fought back. 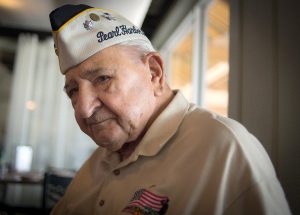 For anyone born within the past six decades, it is because of men like Edward Socha that we do not have to bear the sacrifices he has made. We do not have to endure the hardships he has known. Ed Socha was among the millions in his generation that laid the foundation for this nation’s success.

In the 1930s, Socha took a job as a farmworker, from which he earned pennies a day. There was not enough left over for rent, so he slept on his employer’s porch.

From there, he enlisted in the U.S. Navy. He was stationed at Pearl Harbor on Dec. 7, 1941 when the Japanese attacked. He was there for the first strike against America by a foreign power since the War of 1812. Despite odds that were overwhelmingly against him, he fought back on that day. He fought for his country, his family and for your family. Through the very first wave of attacks, Socha immediately returned to his ship to man his battle station aboard the USS Maryland. 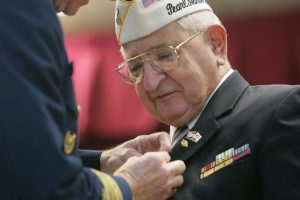 Socha being awarded with the World War II China Service Commemorative Medal in Sun City Center. The medal, created by the Republic of China in Taiwan, is to honor the support of the United States during WWII. Socha was part of a six-man team that pioneered a historic survey of the Yangtze River. A Pearl Harbor survivor, by the end of the war, Socha was a member of a team training Chinese commandos behind enemy lines.

“When I saw the Rising Sun emblem on the planes, I soon found out that it was not a drill,” he said, recalling that tragic and fateful day. “I heard the call for general quarters, and by the time I got to my battle station on the Maryland, I glanced over the side and gasped at the unbelievable sight of the Oklahoma flipped bottom up. She must have suffered three or four or more torpedo hits.”

Today he stands as the only remaining Pearl Harbor survivor in Sun City Center. And today, as on all days, he stands tall. On August 4, he celebrated his 95th birthday at Little Harbor Resort — it was a surprise produced and attended by several dozen of his friends, most, if not all of whom, are also admirers. Included were former high-ranking military officers.

In December, he will recognize the 75th anniversary of the attack on Pearl Harbor. He plans to return to Hawaii to attend the events.

Socha, along with millions of men and women, pushed on to victory in World War II. Socha attained the rank of Commander in the U.S. Navy and serving America and protecting much of the world was both his calling and his mission. He expected no thanks; he worked for his nation and the gratitude he held for us, rather than for any gratitude from us.

And yet words are insufficient to express the gratitude he deserves. He has never yet stopped serving. He has helped to organize and build area veterans groups. In the past several years he has been awarded medals from other nations expressing their appreciation in the most sacred way they could. 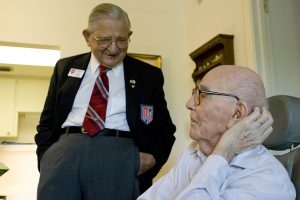 Cmdr. Socha visits with World War I veteran Harry Landis at Sun Towers in Sun City Center in 2007. Landis was then one of the nation’s last WWI survivors. Today, none remain.

To this day, despite his retirement many years ago, he remains Commander Edward Socha. That is not by his choice or preference, but it is out of the sheer respect that he exemplifies to others. He has never stopped being a man of honor. A great man who is emblematic of the great nation that he has long served.

“I’m flabbergasted!” he told the crowd during his surprise birthday party, which returned his words with applause. “I love you all and thank you for coming. Right from my heart.”

Sparing words, perhaps, but not sparing their meaning. He then added, “And Sunday is our 68th wedding anniversary.”

More applause erupted from those at the tables.

Good men stand tall. And there are few men who stand as tall as Cmdr. Edward Socha. In his nine and a-half decades of life, he has sacrificed, he has served, and he has led; always with honor, integrity and humility. 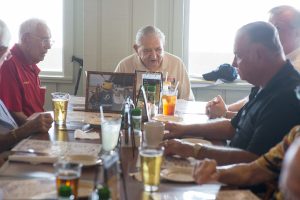 Socha at the head of the table during his surprise 95th birthday party at Little Harbor Resort on Friday.

In a Pearl Harbor Day address during an event in Tampa in 2013, Socha recalled the words of a fellow Pearl Harbor survivor:

Destiny has granted you the courage for the journey through life.

He would go on, with millions of others, to win the war and he continued to serve for another 21 years, retiring from the United States Navy in 1966. His fellow survivor’s words proved prescient, although perhaps too narrow. Cmdr. Socha’s journey through life not only included courage but also grace, humanity, humility and honor.

In nine and a-half decades of life, Cmdr. Socha sacrificed and endured hardships that most of us will never know; hardships that future generations would not have to know. He expects no gratitude, but he deserves it.

In December, he’ll return to Hawaii for the 75th anniversary of the attack on Pearl Harbor, at 95 years of age, having been married for 68 years. He’ll return not as a mere survivor but as a fighter, a defender, and a man of commitment, honor and integrity beyond reproach. Cmdr. Socha will return as an American hero in every possible respect. 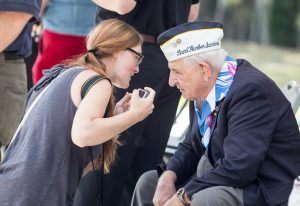