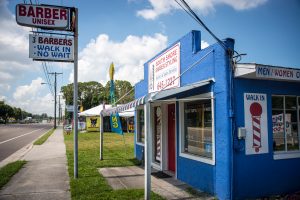 MITCH TRAPHAGEN PHOTO
I’ve gone to this Ruskin barbershop for many years. A good barber (or hairstylist, if you are a middle-aged guy) is more than just a person who cuts your hair.

The building is from a different era. Open the door and walk from the heat into the cool of the air-conditioned room. A television is on and someone smiles — a genuine smile — and says, “Hello.” It could be 40 years ago, when things, in collective memory at least, seemed easier and more simple.

Perhaps things are more simple in here. I’m not certain that things have changed all that much in the world of barbershops and hairstylists. I could certainly be mistaken, but I haven’t noticed an influx of the technology that has so ingrained itself into our lives. And I’m just fine with that.

This barbershop is a reminder to me that despite growth and so many changes in life, things can still be simple. They are friendly and a reminder that real life is better than the virtual life offered by social media and the web. I’m sure they would prefer to be known as hairstylists, and deservedly so. But I’m a middle-aged guy. I go to barbershops.

When I was a child, my Dad would make the short drive from our house to downtown Worthington, Minn., where Mr. Schissel ran his barbershop. My Dad would sit nearby, reading the newspaper or bantering with Mr. Schissel while I critiqued his work and issued threats of lawsuits in the event of a job not-well-done. Mr. Schissel would laugh and occasionally issue a mild curse word that would make me laugh. At eight or 10 years old, that made me feel like I was really one of the guys, and that felt great. Living in a small town had its advantages.

Obviously, I never sued Mr. Schissel; I didn’t even know what a lawsuit was. I had probably only heard the word from Danny on the Partridge Family television show. But Mr. Schissel was much more than a barber — he provided life lessons. He included me into a world that I desperately wanted to see and be in. And soon enough, I was, and I’ve never forgotten him.

In theory I split my time between the Tampa Bay area and the New York City area. For those who have never been there, with a population of nearly nine million and a metro population that exceeds that of the entire state of Florida, it probably seems immense, dangerous and overwhelming. The truth, however, is that the city is largely nothing more than a huge collection of neighborhoods; small towns that come together to make the nation’s largest city. Like Mr. Schissel’s barbershop in Worthington, I could walk to any number of places to get my hair cut. Yet I never have. I prefer the shop in Ruskin.

Everyone has their own sense of personal space, and few people are willing to violate the norms of the concept. But in the barbershop, all sense of personal space goes out the window. The person cutting or styling your hair likely spends more time within that personal boundary than does your own doctor. And worse, by simply sitting there, I am also violating my barber’s personal space.

Think about it, you are sitting in a chair and someone is hovering over you with sharp scissors. The only other professional who also, by necessity, infringes upon your personal boundry with sharp and dangerous tools is the dentist.

I’ve never threatened to sue Dee Dee at the Southshore Styling shop in Ruskin. In fact Dee Dee is one of the very few people I have a more than significant trust towards — not only regarding my appearance in how she cuts my hair but, more importantly, with my own disability. Outside of my audiologist’s office, Dee Dee’s barbershop is quite literally the only public place in which I become completely deaf. My hair cuts require the removal of my hearing aids and once that happens, the TV and all voices disappear into a silent void. I’m probably her most boring client since any possibility of communication ends when the hearing aids come out.

On the last several of my visits, it has struck me how well she handles the immense vulnerability she works with. She has the confidence to know exactly what I want without a word from me. I always leave happy. After years of seeing Dee Dee more or less monthly, the trust is hers. I’m happy that I have her.

I’m sure any of the neighborhood barbershops in the city would, eventually, provide the same trust, but I like Dee Dee. New York City, the place of a thousand Mayberrys jammed together into a mega city, likely even has a Mr. Schissel. I’d like to think that in one or many of the neighborhood barbershops, he is there, quietly giving life lessons to a 10-year-old boy or girl while the father looks and listens on with amusement.

For me, of course, those days are long gone. So each and every month I sit down in Dee Dee’s barber chair, and I trust her with my personal space, my appearance and my vulnerability. I don’t have to talk or hear — she’s known me long enough. She’s a professional, and she is confident. She’s smart like that. Whether or not, like Mr. Schissel, she uses any mild curse words in the process remains a mystery, of course. But I doubt it.

It is so easy to take things for granted. Perhaps one benefit of being deaf in a barber chair is I have to see and imagine what I can’t hear. And one thing is that a good barber or hairstylist does far more than simply cut hair and make people look good. They build trust and more. Life is simple in the barbershop. Thank you Dee Dee. Thank you Mr. Schissel, wherever you may be. I am grateful.