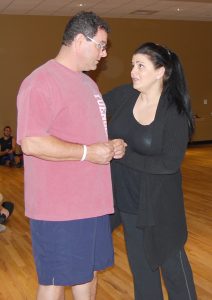 It seems everyone involved with the Manatee Players community theater group are excited about this year’s season opener.

The cast and production staff have been rehearsing and preparing for more than four weeks on the Broadway musical, 42nd Street, which will open on Aug. 11 at the Manatee Performing Arts Center, 502 3rd Ave. W., in downtown Bradenton.

People are very familiar with the 1980 Tony Award-winner for Best Musical, and the popular songs that date back to the 1930s, said Craft, who recently joined the paid staff after years of performing at the center as a volunteer actor.

He has had roles in Cats, Yankees and Spelling Bee.

Based on the 1933 Busby Berkley movie, 42nd Street is the story of Peggy Sawyer, a young dancer from Allentown who has a dream of being in a Broadway show.

After several crazy coincidences, she lands a part in the chorus line of the musical Pretty Lady, ends up taking over the leading lady’s part and becomes a star.

Those attending the 42nd Street performances will be treated to a spectacular production of chorus lines, tap dancing, singing and romantic comedy, highlighted with smart, colorful costumes and elaborate sets.

And everyone will be treated to a roster of familiar songs, such as “We’re In The Money,” “Lullaby of Broadway” and  “42nd Street.”

“We have a huge cast of 27 and a huge production,” Craft said. “We like to open the season with a big bang.” 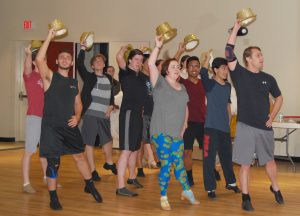 The chorus line goes through one of their dance routines during rehearsal of the Manatee Players’ production of 42nd Street.

Going big is nothing new for the Manatee Players organization.

Their first show in the newly completed performing arts center along Bradenton’s Riverwalk Park in March 2013 was the smash Broadway hit, Miss Saigon, with special lighting effects and a full-size helicopter descending on stage.

“I chose 42nd Street because I knew our audiences will (sic) love the big, splashy, old-fashioned musical told in grand Busby Berkley style,” Kerby said in an email.

“This favorite is filled with beautifully sung familiar songs and crammed with fantastic tap dancing to show off our incredible local talent,” he said.

Kerby, with the help of Musical Director Rick Bogner, was directing and choreographing the show. 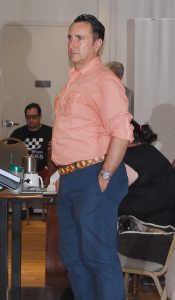 Even when preforming in their former home, The Riverfront Theatre, on Barcarrota Boulevard, the 69-year-old Manatee Players group would take chances and present professional-level performances to their supporting audiences.

In 1954, the theater’s performance of Oklahoma was the first production of the musical by a non-professional group in the United States, according to a history on the Manatee Player website.

This record of producing current and popular plays with first-class performances has earned the Manatee Players a reputation.

“This is my favorite place to perform,” said Michelle Anaya, who was cast in the leading lady role of Dorothy Brock.

“I’ve worked in community theatre in Ohio, and you’re just not used to seeing this level of professionalism,” said Anaya, who studied opera at Kent State University in Ohio.

“I love the people here,” she said. “The energy is very positive and supportive.”

Anaya, who lives in St. Petersburg, said her role as Dorothy has helped her grow as an actor. 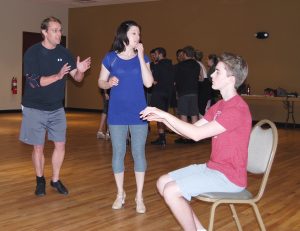 “What scared me the most was that Dorothy is completely opposite of the kind of person I am,” she said. “But that’s good. It takes me out of my comfort zone and I learn more about myself.”

Having acted at Manatee Performing Arts Center before has also given Anaya a sense of comfort.

Her first part in a musical, Les Misérables, was at the Bradenton theatre, and she also played Lady of the Lakes in their production of Spamalot, her favorite role.

Two actors who play one of the love interest couples in the 42nd Street production, Sarah Cassidy as Peggy Sawyer and Brian Chunn as Billy Lawler, also said working at the performing arts center was special.

“ I love the people here,” said Chunn, who has been in at least eight Manatee Performing Arts Center productions over the last three years. “It’s a very creative staff and they’re top-notch.”

Cassidy, who has performed in several productions at Manatee Players since 2011, including Les Misérables and Legally Blonde, agreed. 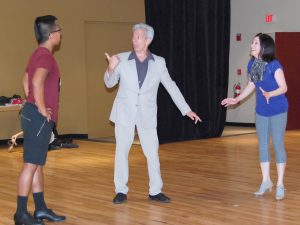 “I was blown away by how dedicated everyone is here,” said Cassidy, who lives in Sarasota. “From the professional staff to the volunteers, they’re an amazing group.”

Because the two actors have been in several shows together, Cassidy was Fiona and Chunn was Shrek in the theater’s production of Shrek, they have gotten to know each other’s strengths.

“There’s a comfort and familiar feeling,” said Chunn, who lives in South Tampa.

“I trust Brian,” said Cassidy. ”There’s a lift in this play that would be difficult with another actor that I don’t know.

“But with Brian, I don’t have any fear,” she said.

Manatee Players’ national standing attracted an actor all the way from New Jersey.

Alan Tulin, who lives in Jersey City, N.J., and works as a teacher in New York City, said the theater company has a reputation of being a well-run operation.

“Everyone have been very helpful and welcoming,” said Tulin, who plays Julian Marsh, the director of the play within the play. “Many of the actors have worked here many times, and they welcomed me even though I’m an outsider.” 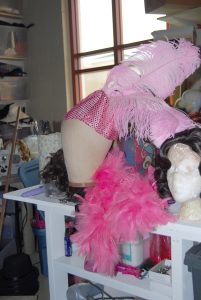 One of the colorful headdresses was created in the in-house costume shop of at the Manatee Performing Art Center for the Manatee Players’ production of 42nd Street.

And the August performance dates were perfect for his schedule, because he can only travel to perform during summer school breaks.

“This part has been on my bucket list,” Tulin said. ”It’s the quintessential ‘back stage’ musical.

“I saw it years ago on Broadway,” he said. “I’ve directed musicals and Julian is a director, so the part is close to my heart,”

Tickets are on sale now at ManateePerformingArtsCenter.com or by calling the box office at 941-748-5875.