Help for My Warrior’s Place 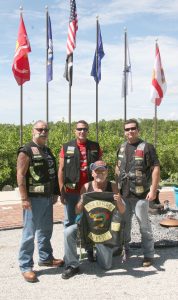 Members of the Nam Knights of Thunder Bay lent a helping hand at My Warrior’s Place in Ruskin over the weekend, showing up to replace their wind-tattered flags at the “Court of Flags” along the Little Manatee River.

“We like to do what we can to help out other veterans,” said Joe “Stache” Mohr, a member of the local chapter of the Nam Knights, composed of the unique combination of Vietnam veterans and former police officers. The Nam Knights was formed in 1989 when a small group of Harley-riding Vietnam vets (who were also all active or retired police officers), banded together to honor the memory of their fallen brothers.

“It’s a great feeling to be part of Kelly (Kowall’s) mission to help our veterans,” said Ron Perry, president of the Thunder Bay chapter. “We want her to know we’re available any time to lend a hand.”

My Warrior’s Place was founded in 2012 as a tribute to Kowall’s son, Corey, who was killed in 2009 in Afghanistan. Since losing her only child, Kowall has worked tirelessly to make a difference in the lives of other veterans and their families, creating a sanctuary for veterans to rest and recuperate from the wounds of war.

“There’s always plenty to do around here,” acknowledged Kelly. “We have 2 acres, so there’s always mowing, gardening and general maintenance to do. It’s never ending.”

“We get a lot of help from veterans because they like having a place they can touch,” added Kowall, “not like donating to some faceless institution where you can’t personally see the results.”

In addition to the assistance she received from the Nam Knights this week, came a contribution of materials and labor from TECO, who sent workers to lay crushed shell on the walkway along the river, install six new poles and electrical boxes, install crushed limestone in the road and driveway, and beautify the garden and gazebo area with 100 bags of mulch and new plants.

“They worked hard for four, eight-hour days,” said Kowall. “Their efforts made a huge difference.” 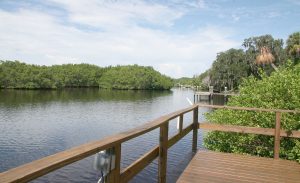 My Warrior’s Place sits in a tranquil setting along the Little Manatee River in Ruskin.

Nestled in a tranquil waterfront area on the Little Manatee River, My Warrior’s Place is home to two houses, four trailers, four RV pads and a laundromat. Amenities include canoes, kayaks, a paddle boat, fishing equipment, a fire pit, screened-in patios, bicycles, boat launch and dock. Kowall said a lot of veterans come out to the retreat just to paddle a canoe or sit around the open fire pit and talk to people who have been through similar experiences. “We give them someone to talk to, and sometimes that’s all they need.”

The “Respect and Remember” Tribute Memorial at My Warrior’s Place is a haven to those who are grieving for loved ones killed in the line of duty. A bronze-like 57-inch fountain sits in the middle of a 20 foot by 20 foot gazebo surrounded by a brick patio, benches and lush tropical plants. Dog tags hang from the ceiling of the gazebo, creating haunting music in the wind. “So many veterans have been affected by grief issues,” said Kowall. “Many are in-between assignments or temporarily displaced. I wanted to give them a place to go, an option other than a motel, where they can have a peaceful, home-like atmosphere and cook their own meals.”

“It is homey here,” agreed Trevor Bromer, a temporary resident at the retreat. “It’s great for veterans, because the support from the government just doesn’t seem to be there.” 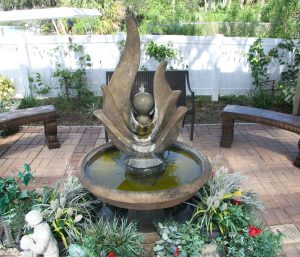 The “Respect and Remember” Memorial garden at My Warrior’s Place.

This is a complaint that the Nam Knights can relate to, said Mohr, as many Vietnam vets received an indifferent and even hostile reception when they returned home. Sadly, the Vietnam War introduced terms like Agent Orange and post traumatic stress disorder to the American consciousness, conditions that still affect the lives of many Vietnam veterans to this day.

“Vietnam veterans were instrumental in helping us make My Warrior’s Place a reality, ” said Kowall, “I can’t express how grateful I am for their support.”

To learn more about My Warrior’s Place, visit mywarriorsplace.org, or call Kelly Kowall at 813-321-0880. For more information on the Nam Knights, visit namknightsthunderbay.com.