From tragedy to transformation: 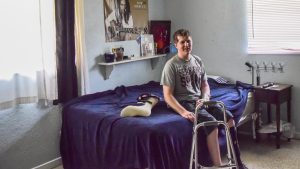 ANDREA SHAY PHOTOS
Shawn Gettinger poses with a walker and an old splint, which he used earlier in his therapy after his devastating brain injury received after being in a fight and possibly getting hit in the back of the head by an object.

While most people across the country spent their evening eating turkey and mashed potatoes, Gettinger was being treated for a brain infection resulting from a barroom attack he experienced two months earlier.

“What I know is all based on the police report, which I don’t really believe much of,” he said now, almost five years later. What he does know is this: A man at the bar he’d been in at Holmes Beach, accused him of stealing his cigarettes. Gettinger denied that he’d done anything wrong, and an argument ensued. Things became physical, another patron broke them up, then Gettinger left the venue. He returned later, and another fight between the two ensued, resulting in life-threatening injuries to Gettinger. He was flown by Bayflite to St. Petersburg where he had emergency surgery.

“According to the report, we fought and at the same time fell to the ground,” he said. But he went on to say that the patron he fought with “later admitted that a friend of his hit me in the head. He went back to the detective who was doing the investigation and said that originally he had lied out of fear of getting his friend in trouble or being retaliated against.” Gettinger described his assailant’s friend as a large man with a reputation for getting in fights in that area. 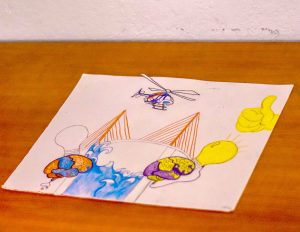 This picture was Shawn’s final project for an art class on color theory at State College of Florida. The assignment was to create a literal or metaphorical self-portrait. “I gave the thumbs up to the nurses and my family when I woke up the first time in the hospital,” he said. The dual brains and the bridge represent his transition from his old brain to his new brain.

He said that EMS reports from the incident describe “a concave indent” to his head, which he believes is more consistent with being hit in the head as opposed to falling and hitting it on the ground. Gettinger’s gotten conflicting information from doctors about his injury as well.

“One said it was consistent with the report, and another said no, it wasn’t. There were a lot of unresolved questions,” Gettinger said. “We had a lawyer look at it, which brought up more questions than answers.”

As he began to recover, Gettinger started working with the Brain Injury Association of Florida, who helped him get connected with physical therapy and a brain injury support group at the Suncoast Center for Independent Living. He was able to attend “Camp TBI,” a summer camp for caretakers and survivors of traumatic brain injuries, where participants had the opportunity to make art, do adapted yoga, play miniature golf and the group even held a dance for participants. Gettinger said he would like to return, but the organization currently does not have enough funding to continue the “Camp TBI” program.

Despite his injuries and the lack of resolution to his case, Gettinger has still found a way to create meaning from the tragedy.

“This was a huge, life-altering event that just opened up my eyes to live right and live well because I really wasn’t at that time,” said Gettinger.

“I was just working at a restaurant, out partying every night; I didn’t have any direction or focus,” he continued. “I was thinking of moving out to California with my brother. But I was just mainly going out to the bars, drinking, partying, which started when I was back at FSU [Florida State University] [in 2006].” 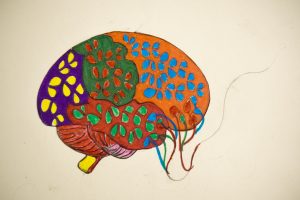 One of the first pieces of artwork Shawn made after getting out of surgery was this interpretation of his brain.

“Now I’m driven, I’m focused, I know what I want in life. I recently started going to church, developing a relationship with God and becoming more family-oriented, spending time with them and focusing on my relationships with them,” Gettinger said. “I have two nephews and a niece; just being able to watch them grow up is amazing. It’s nice being able to do that with a clear head and a clear conscience.”

Gettinger describes himself today as an extremely tenacious person who refuses to give up, and most of the time he has a pretty optimistic view on life.

“It took awhile for me to get to this point,” he said. Following the attack, “I was the ‘why me’ type of person, but I came to the realization that it was a waste of energy.”

Gettinger found inspiration in a quote from Bob Marley, which he remembers to this day: “You never know how strong you are until being strong is your only choice.” He said that when he adopted this viewpoint, he began seeing life differently.

“I want to be a motivation for other people going through the same thing. I want other people to see what I’ve been through and let that be their motivation. There are better days ahead. Everyone has the strength. You just have to dig deep and find it,” said Gettinger.

ANDREA SHAY PHOTOS
Shawn Gettinger poses with a walker and an old splint, which he used earlier in his therapy after his devastating brain injury received after being in a fight and possibly getting hit in the back of the head by an object.

After the attack, despite concerns that he might need to spend the rest of his life in an assisted living facility, Gettinger decided to go back to school and pursue a bachelor’s degree. Although he’s changed his major several times, he’s currently interested in earning a law degree.

“I have always felt very compelled to advocate for people and let justice be served, and be served properly.” Gettinger said his motivations for this are simply doing the right thing, helping people when they need it and ensuring fair and just practices.

“I’ve seen firsthand the justice system and how backwards it is,” Gettinger said. “I’m thinking of getting into criminal justice. What really made me realize that I have a calling for this is what happened to me, dealing with all of this stuff. You have to advocate so much for yourself if you don’t have someone to do it for you. I have a gift for that — I have a lot of tenacity.”