An escape to solitude

Lettuce Lake State Park is a haven for nature lovers 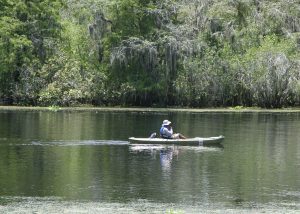 Canoeists and kayakers can be seen paddling along Lettuce Lake.

It was Sunday morning, and I felt a strong need for some solace after weeks of being overwhelmed with violent news reports from around the U.S. and abroad. I turned off the news and got in my car, with no particular destination in mind, ending up 30 minutes later at Lettuce Lake State Park, a convenient stop off I-75 in Temple Terrace at the northern edge of Tampa.

Entering the park, I was welcomed by a refreshing, magical, natural setting, rich with green foliage and moss-veiled cypress trees. I was immediately struck by the profound peace and quiet of the place, which was exactly what I was looking for.

Lettuce Lake Park is on 240 acres along the Hillsborough River, providing a getaway for canoeists, hikers, bicyclists, picnickers and fishermen. Trapped between tall cypress trees in ponds dense with water lettuce, Lettuce Lake is also a haven for nature lovers who come from near and far to drink in the sights of this haunting swamp.

I took the 3,500-foot-long boardwalk that winds around the trees and along the lake, spotting herons, alligators and turtles along the way. I fell into easy conversation with a nature photographer I met along the way, who had an impressive camera lens worthy of an ESPN sports photographer. An avid birder, she was there searching for a specific species of rare birds she was studying. 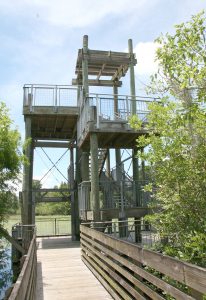 Nature lovers can spot wildlife from the park’s observation tower. 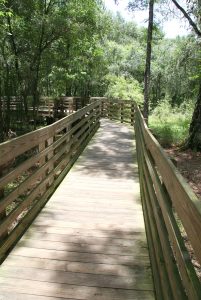 LISA STARK PHOTOS
A boardwalk winds its way through the trees and along the lakeshore.

The photographer told me that she visited here often, routinely spotting turtles, alligators, egrets, herons, squirrels, hawks and other wildlife that are camouflaged in the thick woods and algae-covered swamp areas. I peered between the huge cypress trees and “cypress knees” along the boardwalk and spotted many of the hidden treasures she described. I couldn’t resist shooting dozens of photos here of my own.

I then climbed the three-story observation tower, where I viewed a panoramic display of the lake, covered by a leafy carpet of “water lettuce” from which the park gets its name. I saw several canoeists and kayakers out for the day, despite the 94-degree heat.

Reportedly, more than half of Lettuce Lake Park’s property lies on the natural flood plain of the Hillsborough River, and consists of a hardwood swamp forest that makes it an ideal environment for wildlife and various plant communities. From this vantage point, I could appreciate the lushness of its vegetation teeming with life, seen and unseen.

The design of Lettuce Lake Park has clearly made it a hub of family activity since its opening in 1982. Wooded picnic areas, shelters, bicycle paths, nature trails and playgrounds were crowded with families from the area and apparently from around the world. Strolling around the grounds, I heard a half-dozen languages being spoken (and shouted in glee by children on the playground) including French, Spanish, Portuguese, Chinese and German. 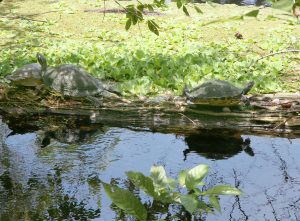 A procession of turtles makes its way across a fallen log.

I stopped into the Audubon Center, housing an interpretive display of nature exhibits depicting the animal inhabitants of this section of the Hillsborough River. I saw taxidermic displays of woodpeckers, wild turkeys, mockingbirds, eagles, herons, ospreys, venomous snakes, turtles, largemouth bass, woodstorks, bluegills and more. I also learned about the life and culture of the Indians who were the original human inhabitants of this area.

At the Audubon Center students can sign up for summer workshops with titles such as: Fire Making and Survival Skills, Identifying Non-venomous Snakes, Tree Identification, The Florida Panther and Black Bear and All About Florida Fossils.

The Park also offers free guided nature tours on Saturdays and Sundays, allowing families, schools, scouts and birthday groups to experience the park with the aid of rangers highlighting the native plants and animals. Families and groups may also rent canoes or kayaks to explore the park. Based on my brief and pleasant visit, I would say it would be well worth the modest cost.

For more information about Lettuce Lake State Park, visit www.hillsboroughcounty.org, or call the Audubon Center at 813-987-6204. 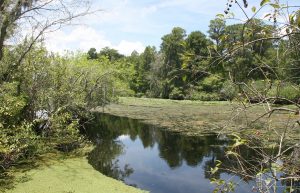 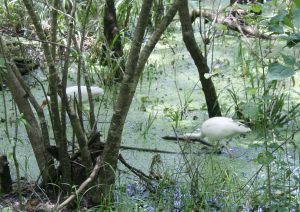 Herons can be seen wading among the trees. 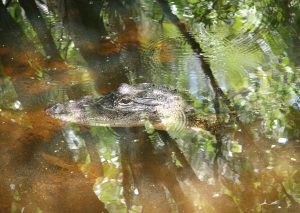 An Alligator pokes his head up from the water along the boardwalk.