Sittin’ on the walk of the bay

In one of the most car-centric metropolitan areas in America, walkable cities emerge. 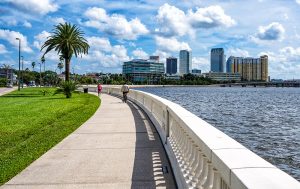 Claims have been made that the 4.5 mile walk along Tampa’s Bayshore Boulevard is the longest continous sidewalk in the world. What is certain is that it is among the most beautiful walks in the world. And while Tampa is making strides to become a walkable city, it can still be a tricky proposition to cross traffic to get to it. MITCH TRAPHAGEN PHOTOS

The wet breeze coming off of Tampa Bay was surprisingly refreshing, restorative even, on this hot and humid July morning. Perhaps it is the salt in the air wicking up just enough humidity to feel good with the breeze cooling the skin heated by the morning sun. And such as it is on any given day on the broad sidewalk on Bayshore Boulevard in Tampa.

At 4.5 miles long, the city claims the Bayshore walk is the longest continuous sidewalk in the world. It exists within touching distance of the bay, offering opposite side views of stately homes, many easily considered mansions. Walking towards the city you round a single curve and are presented with the skyscrapers of downtown Tampa. The beauty of the walk is interrupted only by the traffic speeding along between the homes and the sidewalk.

The traffic has long been an issue in this metro area, and not only on Bayshore. Survey after survey have indicated that the greater Tampa Bay metropolitan area is among the most dangerous in the nation for pedestrians and bicyclists. Last week, the public Facebook Page “Walk Bike Tampa” posted a plea asking drivers to slow down on Bayshore and to use caution with bikers and pedestrians, claiming one driver was exceeding 60 miles per hour and then ignored a group of pedestrians in making a turn despite a walk signal. Crossing Bayshore Boulevard is usually not for the timid. There is a bike lane but few pedaling (actually none on the day I was there) appeared willing to take the risk in using it next to the fast-moving traffic, preferring instead to avoid collisions with those walking on the broad sidewalk.

The irony is that, despite the surveys and the ever-growing traffic, Tampa is making huge strides in becoming a walkable city. And yet one of the most stunning of the walks can be a dangerous proposition to reach. But that may soon change.

In the decades after World War II, the siren call for success and the American Dream came from the newly built suburbs as families fled the cities in search of space to call their own. That space came largely in the form of ranch-style homes, yards filled with green grass and the stereotypical white picket fence. So powerful and encompassing is that image that the website Homes.com recently revealed the results of a survey they conducted asking British citizens what they believe makes up a typical home in the U.S. An artist’s rendering of the survey results revealed a huge home with a large vehicle and an abundance of pavement for it. And, of course, a patch of green grass surrounded by a white picket fence.

The British, however, are behind the times, as times are changing.

People are moving back into cities. And in doing so, people expect to be able to walk to restaurants, stores, museums and other forms of entertainment. St. Petersburg has had a long lead on Tampa in keeping up with that trend as residential towers go up downtown and quickly sell out. Residents of the city across the bay have a growing list of places to visit in which no car is required.

It appears the trend is more than a passing fad. Those of the Millenial Generation appear to be demanding walkable cities. In larger numbers than previous generations, they want to walk not only to a museum or to a restaurant or a nightclub, they also want to walk to work. Statistics appear to bear that out.

According to a 2013 study by the Transportation Research Institute at the University of Michigan, there has been a significant decrease in the percentage of young people having driver’s licenses. The researchers, Brandon Shoettle and Michael Sivak, did, however, determine that the primary reason was the cost of obtaining and maintaining a vehicle. Yet even so, a full 22 percent of those surveyed, ages 18 to 39, indicated that they never plan to get a driver’s license.

City leadership in Tampa has long hoped to foster a livable and walkable city, with downtown as the focal point. And today the efforts appear to be reaching fruition. 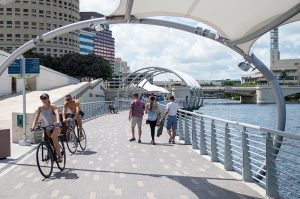 Tampa’s Riverwalk is the realization of a dream 40 years in the making. At 2.6 miles, connecting parks, museums and restaurants, it is a public celebration of the city’s waterfront.

The most notable addition to the grand sidewalk along Bayshore is the newly opened Tampa Riverwalk, a project originally conceived in 1975. The 2.6 mile walk along the Hillsborough River links numerous city parks and museums all the way to Channelside, near the Florida Aquarium. The walk, which is open to all, is a celebration of the city’s greatest asset: the waterfront. Downtown Tampa has long been all about business and government, becoming a ghost city after hours and and on weekends. That is no longer the case. Along with Riverwalk, restaurants with outdoor seating are bustling with patrons, while families visit museums, pedestrians stroll and bicyclists pedal, particularly in the areas adjacent to Riverwalk.

While the Tampa Riverwalk has received the most attention in the city’s effort to be more walkable, Tampa is also making strides in becoming rideable. In addition to numerous bike lanes through Tampa and Hillsborough County, in downtown an increasing number of bike lanes are separated from vehicle traffic by curbs. In those places, bicycle-friendly stoplights have been added giving those who pedal a safe right-of-way against the perils of turning cars.

Big cities across America are experiencing a renaissance — and the skyrocketing prices of those cities, New York, San Fransisco, St. Petersburg, Seattle, Portland, among others — reveals the changing dreams and dynamics of America. It is impossible to know if the flight back into the city will last over the decades, but one thing is certain: the nation’s urban centers, with downtown Tampa prominently among them, will be the better for it. Tampa, long considered one of the most dangerous cities in America for pedestrians and bicyclists, is becoming one of the nation’s friendliest for both.

Information about the Tampa Riverwalk is available at www.tampagov.net/riverwalk.

Information about the Homes.com survey, including Florida perceptions, is available at www.homes.com/real-estate/this-just-in/what-brits-think-about-american-homes/ or at tinyurl.com/observer-homesurvey.

The Walk Bike Tampa Facebook page is located at www.facebook.com/Walkbiketampa.