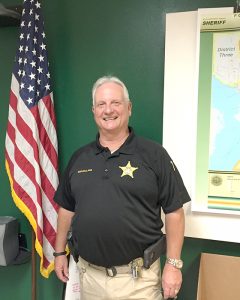 If all goes as planned, the Hillsborough County Sheriff’s Office will add a fifth district to its Department of Patrol Services next spring, reshaping Dist. IV to accommodate future growth.

The district, which is based in Ruskin, now serves the huge area of South Shore, Progress Village and Bloomingdale. When the changes take place, Dist. IV’s northern boundary is projected to become the Alafia River, leaving Gibsonton, Apollo Beach, Ruskin, southern Riverview, Balm, Wimauma and Sun City Center within its service area.

As presently drawn, new Dist. V would absorb Progress Village, Bloomingdale and northern Riverview and the substations associated with those areas, which are located between Causeway Boulevard/Lumsden Road and the Alafia River, presently the most heavily populated area of Dist. IV. No buildings are to be relocated, Bullara said. The Sun City Center and Gibsonton substations will remain in Dist. IV.

“We’re looking at March of next year,” said Maj. Rob Bullara, Dist. IV commander. “Tentative boundary lines have been drawn for the fifth district, and we are currently monitoring service to determine if any changes are needed. That includes the number and kind of calls for service, special detail assignments and manpower requirements.”

The major said the realignment will not reduce any service residents currently receive. He noted that although Riverview will be split geographically in the proposed realignment, residents of that community should expect a seamless transition.

“The boundary change is being made to address future growth, mainly due to the explosion of construction and number of people down here. This southeast corner of the county is a hotbed right now, and we’re preparing for what’s coming.”

To back that up, Bullara cited statistics from an HCSO report estimating 1,000 people are moving into the district each month and added the population within Dist. IV’s 34 current subdivisions is 288,000.

“Last year 2,000 permits for single-family homes were pulled, and through April of this year, 500,” he said. “This area is growing so fast, and we need to be ready for it.” 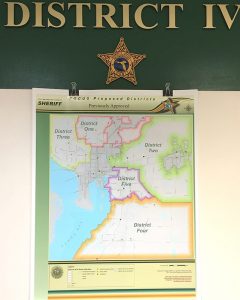 Despite the fact that overall crime in Dist. IV is down, its 200 deputies presently handle about 17,000 service calls per month. When the realignment officially takes place, they will have the opportunity to work the areas they’re now patrolling, regardless of what district that includes, so there will be minimal if any disruption for them, Bullara said.

The major estimates he will initially lose about 30 deputies to Dist. V after its final boundaries and anticipated needs are determined. Other deputies to staff the new district will come from patrol districts I, II and III.