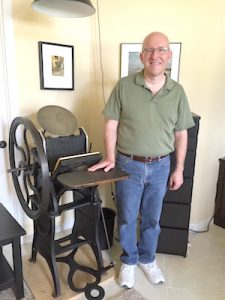 Kurt Carr stands next to his 1894 Golding Pearl printing press in his River Plantation home in Parrish that he bought in December. KURT CARR PHOTOS

Parrish resident Kurt Carr has worked with 21st century technology most of his adult life, but his childhood passion for a 15th century craft still burns in his heart.

A resurgence of letterpress printing as an art form has been growing over the past few years throughout the world, but the 56-year-old Carr has been interested in the craft from an early age.

“I’ve been fascinated with things that put words on paper since I was a child,” the self-employed computer consultant said. “I like pens, typewriter, anything like that.”

His parents bought him a set of rubber-stamp letters when he was around 5 or 6 years old.

“You had to put each letter together one at a time to form words and sentences,” Carr said. “I even printed a newspaper.”

This was the beginning of his love for the art of letterpress, a process Johannes Gutenberg advanced in the 1450s with the development of movable type and an improved printing press.

The Gutenberg Bible, printed in 1452, was the first book ever to be published with movable type. Prior to that, scribes, usually in monasteries, produced all books by hand with pen and ink.

Carr relates his fascination with letterpress to his being dyslexic.

“I used to write backwards,” he said.

This is how the individual piece of metal type for each letter is cast, backwards, with a raised surface so that when it is inked and pressed onto paper the letter can be read correctly.

The small rubber-stamp set and press was only the beginning of Carr’s enthusiasm.

He saw an ad in the back of Popular Science magazine for a Kelsey printing press outfit and knew he had to have one.

At 16, Carr got a job putting books away at the Wadsworth Public Library, a small town near Akron, Ohio, where he grew up.

“I loved books, but it was difficult for me because of my dyslexia,” Carr said. “But it was good because I earned $200, enough to buy my Kelsey press and four fonts of type.”

The Kelsey press has been a favorite of the hobby printer for more than a century.

Founded in the 1970s, the Kelsey Company supplied a complete line of printing supplies, including small hand presses and a variety of type, to thousands through its mail-order business until it closed in the 1980s.

Carr used the small Kelsey press until he was 23 or 24 years old, he said. He practiced printing business cards, ephemera, note pads, and even some stationery for his parents. 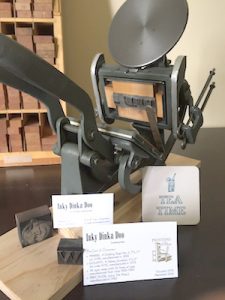 A Kelsey printing press sits atop a desk in the home office of Kurt Carr. On display are some business cards and ephemera Carr printed.

“My first paying job was printing business cards for a local auto dealership,” he said.

As happens in most people’s lives, Carr got busy with his career and the printing equipment got packed away.

But even though he did not use it all those years, every time he moved, he carted the small press and type with him.

Then in 2014 Carr was doing some computer consulting with a printing company, and the smell of the printing ink and paper relit the spark.

“I pulled the press out last October,” he said. “It was kind of fun looking at all the type and stuff.”

So with more time to devote to his passion, Carr decided to set up the press and work with it again.

He set it up in the office in his and his wife, Julie’s River Plantation home.

“It is nice that Kurt has been able to find a creative outlet as an adult doing something that fascinated him when he was young,” Julie said.

With more free time to pursue interests other than work, Kurt has been researching letterpress on the Internet.

“I started going on sites dealing with letterpress,” he said. “The first thing I saw was the web page for Jack Manwaring’s Calusa Press in St. Petersburg.”

Manwaring was offering for sale a metal type cabinet with 24 fonts of type.

Carr bought it and put it in his office.

Then Carr saw on another letterpress enthusiast’s website a listing for a printing press larger than his for sale.

It was a Golding Pearl, a popular small-platen press that was free-standing and not a tabletop model, such as the one Kurt owned.

The Pearl, which was manufactured until 1927, had a reputation of being reliable that continued into the 21st century.

“It was owned by a guy in Spring Hill, Fla., named Dennis,” said. “It was in his garage since 1968, and still had the last job printed on it locked up in the press.”

The Pearl, too, now has a prominent place in his home office.

Kurt bought it in December and has already printed business cards and other ephemera with it.

Kurt is now working on a more ambitious job.

“I signed up for the Bodelian Shakespeare Project,” he said. “I’m doing Sonnet 17.”

The project is a worldwide effort to reproduce all of Shakespeare’s 154 sonnets using the raised-surface — or relief —printing process.

Individual printers have signed up to do each sonnet. The Bodleian Libraries in the United Kingdom is sponsoring the project.

When trying to come up with a name for his printing establishment, he said he was writing down anything that had to do with printing and the song just popped into his head.

Kurt said the difference between having a printing press in 1976 and 2015 was “money and the Internet.”

He now has more discretionary funds than when he was younger, and the Internet makes it easier to learn about letterpress.