Perhaps there simply are no answers. Or, perhaps more likely, the answers are multi-generational in that we could only begin today, but will not live long enough to enjoy the solutions. If the latter is the case, where to even begin? And, of course, there is more than one question to deal with, making it all the more complex. 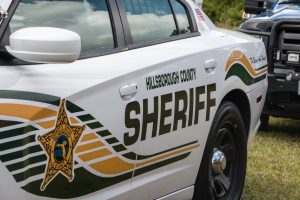 Mitch Traphagen Photo
Our nation has been free for 240 years and for that. For that, we can thank our men and women in uniform — including the HCSO.

For those of us of a certain age, it seems the America we once knew is going away. There are questionable police shootings and there are lunatics shooting the police. There are lunatics shooting up nightclubs. It seems that somehow people are now so much more willing to act out their various brands of psychoses in the bloodiest possible ways. Certain types of weapons appear to be a problem with no easy solution and now it seems we’ve been tossed back into the worst of the past with growing racial tension.

This nation has been free for 240 years, but law and order has been our foundation, our bedrock. It is an extremely fine balance — citizens must respect law enforcement and law enforcement must respect rights. Being a human system, perfection is an illusion but, at a minimum, we try. We must try. We must also realize that the weapons that we are free to buy and to own have forced law enforcement into moving from a position of a civilian agency into a paramilitary agency. They’ve had no choice. A good guy with a Glock isn’t a match for a bad guy who comes out of nowhere with an AR-15. It’s a sad testament that for our law enforcement officers, body armor now goes with the badge.

Our world is so intensely connected that while — not minutes later — while — something is happening in a suburb of St. Paul, Minn., we know about it in the Tampa Bay area. We now each have the power to broadcast live to the world. As a result, we are increasingly going to see things that will make us question everything. We are going to increasingly see things that will make us believe the United States of America is going to hell in a handbasket.

I think the reality is that we’ve gained an immense power of global communication without gaining an associated perspective. I’m not convinced that more bad stuff is happening in this nation. We are just hearing about more.

Obviously that is cold comfort for a family in St. Paul and for the families of the law enforcement officers in Dallas gunned down in the line of duty. And it is important to keep in mind that, while both are tragic, the two acts are not related. I find it unlikely that a police officer in suburban St. Paul woke up one morning last week thinking, “I’m going to kill a motorist with a busted taillight today.”

That is much different from the Dallas murderer who, based on his own words, had certainly decided to purposely kill police officers.

As Americans, when we see a problem, we have duty of devotion to our nation to stand up and seek solutions. Unfortunately, with our new-found communicative abilities we don’t necessarily do that — instead, too often, we seek strawmen and scapegoats. We don’t have to analyze a situation impartially or critically because it is far easier to simply confirm our own opinions and biases.

Worse, I’m certain the majority of Americans are open and impartial in seeking and hoping for solutions to the many problems and questions we face today. But a minority of us are much louder than the majority. On either side of any issue, those small groups seek to define the narrative that suits them — and they work to drag you along.

There is little sense in pointing fingers but there is one certainty in which I can take comfort. I’ve covered the Hillsborough County Sheriff’s Office for nearly 15 years, and I’ve yet to encounter an organization as professional and as dedicated as the men and women of the HCSO. I do not believe what happened near St. Paul could happen here.

It is important to understand that no law enforcement officer actually wants to make a traffic stop. In pulling over any vehicle, they have absolutely no idea what is waiting for them in the vehicle parked in front of them. It is always a potentially extremely dangerous situation for them. They take no glee in “catching” you speeding or driving erratically. They pull over people who are a danger to you and to others.

I’ve asked numerous deputies about their feelings on concealed weapons. Almost universally I’ve been told that when they pull someone over and a driver announces they have a concealed weapon, that at least it is a known situation and that there aren’t likely to be fatal or tragic consequences as a result.

In 15 years of covering the HCSO, I’ve never once seen an “us against them” mentality. I have been on ride-alongs in which deputies have encountered people who show almost no respect whatsoever for them or for the American Flag each officer wears on his or her sleeve. And yet, in the face of that, HCSO deputies respond with respect. They will refer to even the most obnoxious as “Sir” and always in the most confident voice imaginable. But be assured that if a lack of respect devolves into threatening a life or breaking a law, they will stop it — in the most confident way imaginable.

We are all human, we are all imperfect. We simply cannot expect something from others that we ourselves fall short on. Law enforcement officers are no exception, but they try — and each day they wake up, they know that it could be their last. Ours is a dangerous world. Our nation is dangerous. It always has been. For most of us I’m convinced we are safer today than ever. But I don’t think the same can be said for law enforcement officers.

They deserve our respect. They deserve our gratitude. They live on the front lines of an invisible war that, thanks to their service, those of us on this side of the thin blue line do not have to endure. In 15 years of covering the men and women of the HCSO I know that they embody the phrase, “To Protect and Serve.”

The America we know is certainly changing, but it is not going away. And for that, we can thank law enforcement. In their respect for us and this nation, blood is often shed on their side of the thin blue line — they take bullets and more, so we don’t have to. Certainly we must question problems when they arise, but these men and women have earned our trust. They’ve earned our gratitude. Every single day. More than any politician or corporate CEO, they are holding this nation together.