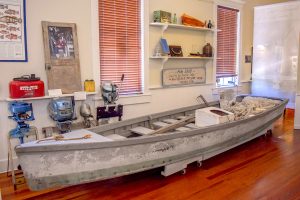 An almost 70-year-old pole skiff from Siesta Key on display.

In the quiet village of Cortez, just near the corner of 119th Street and Cortez Road, lies the Florida Maritime Museum. Established in 1998, the museum preserves the area’s rich history as a fishing village that’s existed for hundreds of years.

Amara Nash, a curator at the Florida Maritime Museum, described Cortez as one of the oldest historic fishing villages that still continues to function as such. The community of Cortez created the museum; citizens wanted a way to preserve and pass on their heritage in the wake of increasing industrialization and urbanization. 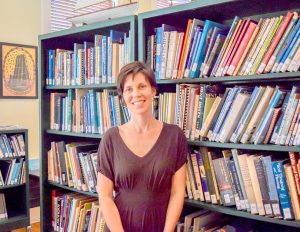 ANDREA SHAY PHOTOS
Amara Nash curates the museum, caring for its historical artifacts, and is currently fundraising to create a “folk school” in which the public can learn traditional skills like sail making.

The building that now houses the museum existed as a one-room schoolhouse from 1912 until 1961, then became a private residence where artist and master wheeler Robert Sailors lived until his death in 1995. After Sailors’ death, the building began to fall into disrepair until the citizens of Cortez approached the county about turning the building into the Florida Maritime Museum. Finally, in November 2007, the museum opened to the public.

Situated on 4 acres of land, the museum also operates and maintains the Pillsbury Boat Works building, a historic boat-building machine shop originally located on Snead Island, and the Burton Store building, which was once a small general store, post office and run boat depot. Sometimes referred to as the Bratton Store or the Albion Inn, the building awaits ongoing fundraising efforts for completion. 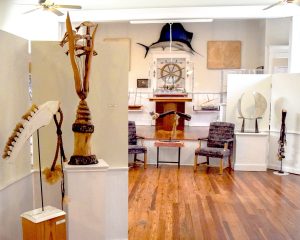 The museum holds classes in the hundred-year-old boat works building, and their goal with the Burton Store is to open a folk school where they can teach classes to the public similar to those that would have been offered in a traditional fishing village. Aspiring fishermen would have learned skills like paddle making and sail making, net mending and woodworking, and women in the village would have learned crafts such as quilting, canning and making soap.

Their current exhibit, “Living By Water,” by artist Steve Humphrey, contains abstract sculptures made from “found” nautical flotsam and jetsam. According to Nash, it’s rare that the museum puts on a one-person show, but the theme, abundance and quality of Humphrey’s work influenced museum staff to show an exhibition for his work this summer. 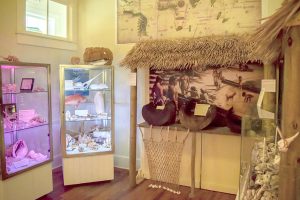 Ancient native people used the village for hundreds of years. Native Cubans fished seasonally in the village, setting up camps or “ranchos,” then returned home when the fishing season was over.

About the exhibit, Nash says, “We wanted to reach a diverse audience, to show all the different ways maritime concepts can reach people.” The exhibits are geared toward demonstrating “how maritime history can be interesting and important.” She wants to contradict the idea that maritime history is boring or archaic. “Even if you think maybe it’s not for you, the concepts behind the exhibits are actually very interesting and even fun.” Past exhibits they’ve done include “Cats at Sea” in collaboration with Cat Depot, and “Fins, Scales and Tales” with assistance from the Lucky Supply Tattoo Museum in Largo, Fla.

“Living By Water” runs through the summer season until Aug.12. Then the museum will close for routine maintenance until Sept.13, when it will reopen for the fall. Its fall exhibition, “Shipwrecks: Legend and Lore” will open in October.

Visit their website for more information and schedule of artists.