With a bright light to guide her,

walking for those less fortunate 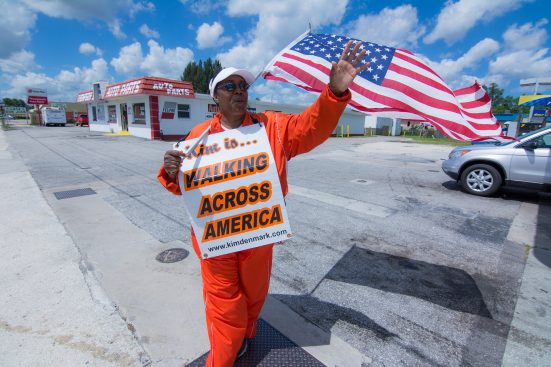 For the past 16 years, Kim Denmark has walked more than 5,100 miles across 16 states and is on her 29th pair of tennis shoes. She is walking to raise awareness for the homeless and those stricken by poverty. She attends to all, but her focus is on homeless veterans and families. Along U.S. 41 there were no shortage of drivers honking and waving. She smiled and waved back to each one.
MITCH TRAPHAGEN PHOTOS 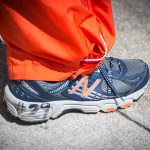 Kim Denmark is a force of nature, although it’s likely she would not prefer that term. She would choose to include God as a driving force. Her faith is absolute, as is her humanity. Denmark emanates a very bright light on a wavelength spectrum only the soul can see. It is obvious for those willing to see it. And so many do.

For the past 16 years she has been walking with an American Flag over her shoulder and a sandwich board sign to raise awareness for the plight of the homeless and poverty in general. She has walked more than 5,100 miles across 16 states and is currently on her 29th pair of tennis shoes.

“People ask me why is this taking so long,” Denmark said. “My goal is to do something in every city that I’ve been in where there have been large numbers of homeless. I ask people what they want to do about it.” 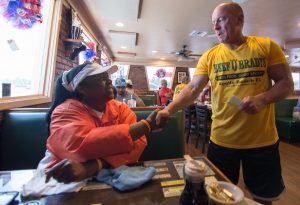 Denmark makes friends wherever she goes. People seem naturally drawn to her and appreciate her mission.

She asks that of both the homeless and of officials who can help them. Her honesty and integrity come through noticeably in her manner of speaking. She cares deeply but is very direct.

“I ask people about their backgrounds and too many have said they were in the military,” said Denmark. “Too many are suffering from PTSD [Post-Traumatic Stress Disorder]. If I had to prioritize, homeless veterans would be number one. I found out there were so many once I started walking.”

She paused for a moment before making a striking point about veterans.

“We were their number-one priority when they were serving. So why aren’t they ours now?”

She seeks out the homeless, wherever they may be. She doesn’t discriminate — she will stop to help the alcohol or drug abuser with the same passion she has for everyone else. While her focus is on veterans and on families, she reaches out to all. She provides them with the dignity of her humanity, something that is often denied them by a society that often prefers “out of sight, out of mind” when it comes to the homeless, even despite that they are visible almost everywhere. 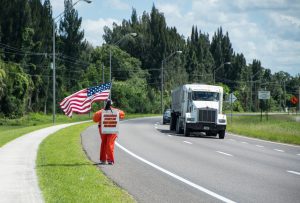 Along U.S. 41 there were no shortage of drivers honking and waving. She smiled and waved back to each one.

In the cases of substance abusers, she will ask them what they are doing, what they are waiting for, if they just want a handout. And then she will help them in any way possible, even if it means taking them along to a mayor’s office.

She has actually done that.

“I’ve found families living in their car,” she said. “To me, that’s a serious issue. There are no drugs or alcohol at all, these are just tough times. And I’ll do what I can, call who I have to in order to find help. When I’ve found the right people, they’ve never said no.”

Within minutes of meeting her, it’s not hard to see why. Wherever she is, she instantly makes friends. Within moments, she is shaking hands and getting hugs from people. Others ask if they can have a photograph with her. Her bright light is as beautiful as she is.

But at one time, her life was far different.

“I had a successful business in Ohio,” she said. I’m in the middle of 11 children so I love people. Back then I felt like if I could make a successful business then anyone could … all they had to do was get off their lazy behind,” said Denmark. “I was very arrogant. I became withdrawn, angry and stressed. I went to a psychologist to find out why I was so stressed when I had everything.” 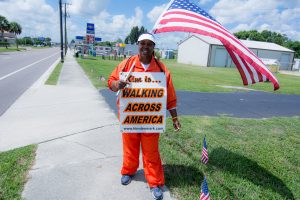 Denmark was excited when she saw the American Flags someone had planted along U.S. 41 in Ruskin. It was the only photo she asked to have taken.

“But then one day I had an epiphany,” she continued. “I turned to prayer.”

She hit a low point and then had a dream about homeless people. In her dream, she was ignoring them or abusing them or telling them to get out of her neighborhood. And then she says she finally surrendered and heard something.

“All I kept hearing was, ‘Walk,’” she said. “I thought I couldn’t walk, I was obese back then, I could have a heart attack. But then I thought that I could walk for poor people. I am going to do for others until it is time to stop.”

And she does exactly that. She has little fear; she seeks out homeless camps. She talks to people as equals, not as subjects of simple interest or curiosity. She wants to help and she does all that she can. People trust her instinctively.

She has felt threatened before, but those situations have been rare. One was in a very rough neighborhood in Baltimore, which in the end worked out well. Another was from a man who professed to be a member of the Aryan Nation and told her that she wasn’t welcome to walk down the road. Even while carrying her American Flag.

And she had a different sort of encounter in Florida.

“I didn’t research it well enough,” she said of the Sunshine State.

She told the story of walking on Tamiami Trail out of Miami and seeing two objects on the road. And then one of them moved. She realized that they were alligators and called 911. She told the man who answered that there were alligators on the loose west of Miami. He paused and asked if she would mind if he put on her speakerphone. He asked her to repeat her situation.

With increased urgency she shouted out that there was a wild gator on the loose. She heard the laughter on the other end of the line. The man told her that’s where they live.

In the end, the alligators weren’t a threat, but she did have to tape up her hands and ankles to protect herself from the insects while walking across the Everglades.

She kept walking, finally through Manatee County and into Hillsborough. She stayed in Ruskin for a few days, talking to the homeless and seeking out those who could help.

She says she walks from one to 10 miles per day, always obsessively careful with her flag. Her distance depends on the homeless population she finds or how many people stop to talk. She rarely knows where she’ll ever stay on any given night. Somehow things just work out for her.

Last Wednesday from Ruskin she said, “Today I’m going to walk to Apollo Beach. Someone is going to meet with me to talk about talking to their group. But I also want to go to church.” 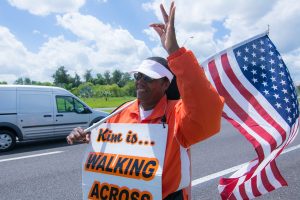 This week she plans to be in Tampa where she heard that numerous families were about to lose their homes due to an apartment building being torn down.

Even with a difficult mission, nearly every step she takes is done with a smile on her face. She is always ready to wave to the many people in cars honking a greeting to her. She is always happy to stop to talk.

And with it all, she asks for nothing. In an hour-long interview, even after being asked three times how people could help, she never asked for money, despite that her budget is a threadbare shoestring at best.

“People can walk with me,” she said in reply. “They can call my cell phone. They can send me an email. They can just stop by and say, ‘Hi.’ I have a petition they can sign.”

The petition is a call to end veteran homelessness. She has specific ideas on how that could be accomplished. She plans to take it to Washington, D.C., on foot, of course, before the end of the year.

When asked specifically about money, she said that she would prefer that “people stumble upon her website and donate from their own hearts” rather than her saying anything about it. Money is not her mission. In meeting her, she would never bring it up. She probably won’t like seeing it in print. 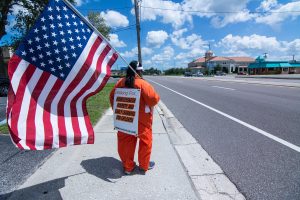 The interview in the restaurant was winding down. Earlier she had met a group of middle-aged men from a softball team and they immediately became fast friends. Before leaving, one of the men, someone who clearly had a military background, came over to shake her hand and to thank her. Outside, someone from the restaurant asked if she would pose for a photo with her.

And then she put her 29th pair of tennis shoes to the hot pavement of U.S. 41 and started walking to Apollo Beach, creating a striking figure in her orange jumpsuit and flag over her shoulder. Even the Florida sun was no match for her soul’s bright light as one driver after another honked in greeting. With each one she smiled and waved. She walks to help others, but along the way it seems she found herself.

Kim Denmark plans to finish walking in 2020. For more information, visit her website at www.KimDenmark.com. Her email address is kdenmarkwalks@hotmail.com and her cell phone is 678-818-9907. The organization she created, Walk Across America, Inc., is a 501(c)3 nonprofit.