What goes around comes around for Riverview woman 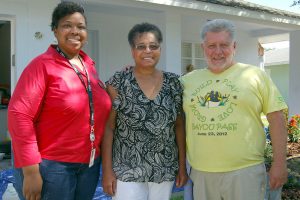 When Hazel Jackson was asked to help start Homes for Hillsborough 23 years ago, she had no idea that she herself would benefit from the self-help program one day.

In celebration of the USDA National Homeownership Month, 35 volunteers from the Florida Home Partnership showed up at Jackson’s house in Summerview Oaks last week to show their appreciation for her more than two decades of contributions to the nonprofit group.

Some applied fresh coats of light bluish-gray paint to the exterior and trim, while others made garden beds of mulch and rock, and then planted colorful flowers in them.

“I’m ecstatic,” said Jackson, 67. “I knew my home needed painting and I didn’t know how I was going to be able to get it done. I was completely surprised.” 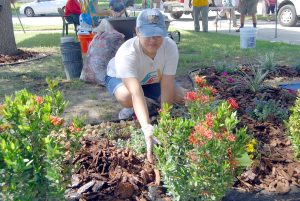 “For years, Dorothy tried to get me to purchase a home through the program and I kept resisting,” she said. “I was living in a mobile home in Wimauma and just didn’t want a 30-year mortgage.”

But when she left South Bay Hospital after more than 20 years in 2005 and retired, Jackson took the plunge.

She chose her own lot in Summerview Oaks and helped build the four-bedroom, two-bath home she, her daughter and two grandsons now live in. 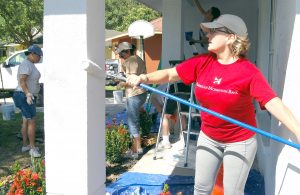 Refreshing Jackson’s home was selected as this year’s event. While smaller in scale, the effort achieved its purpose.

“These events provide opportunities not only to celebrate National Homeownership Month, but also to inform (area residents) about our programs and bring the community together,” Pfeiffer said.

Jackson, one of the first black students to integrate East Bay High School, was living in Wimauma in 1993 when community activist Dorothy Duke asked her and Matias Cruz to help canvas the neighborhood. Duke and a woman named Dorothy Height had previously started a self-help housing program in the Mississippi delta, and Duke was looking to do the same in the Wimauma area.

So Jackson, Cruz and Duke went door-to-door collecting information to justify the need for a similar program in the community, where they found people living in inferior housing. Although Duke had her eye on a piece of property in Wimauma, a vocal group of area residents ultimately resisted her efforts to build 20 homes there, Jackson said. 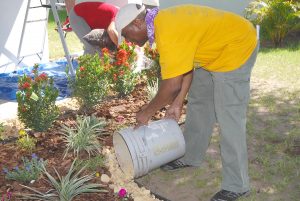 “When we first started there were no monies available,” Jackson said. “So Dorothy and a friend used personal funds for seed money. She went back and forth to get funding, and eventually received it from the USDA and Hillsborough County. It was a long process.

“Dorothy (who is now deceased) was persistent,” Jackson recalled, smiling as she said the words. “She was someone you didn’t say ‘no’ to.”

The USDA-sponsored Florida Home Partnership has assisted hundreds of area residents tofinance and build their own homes through low-interest loans, down-payment assistance and the requirement of sweat equity in three phases of Las Villas (formerly Homes for Ruskin) and five phases of Bayou Pass in Ruskin; six homes on Camp Street and the Hidden Creek community in Wimauma; Summerview Oaks in Riverview; and Sunset Hills in Dade City. Through the Hillsborough County Neighborhood Stabilization Program, it also has refurbished and/or built 80 townhomes in Sunset Hills in Plant City and 13 units in Friendship Village in North Tampa. 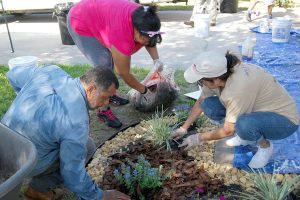 Manuel Soto, owner of Manny’s Landscaping in Riverview, Vanessa Josey and Mary Bernardino work on a garden bed in Hazel Jackson’s front yard. Volunteers made the beds, edged and filled them with rock and mulch, and then installed colorful flowers and other plants like these. Soto donated materials and labor.

Duke initially asked Jackson to become the first Homes for Hillsborough employee, a position which at the time was unpaid. But shortly after, Duke invited her to become a board member, so Jackson gave up the job to accept the role and has continued to serve ever since. She also serves on the board of the Wimauma Community Development Corporation, formerly known as the Citizens Improvement League of Wimauma.

“I’m happy to have been a part of and still be a part of the Florida Home Partnership,” Jackson said. “I never dreamed it would become this successful, but I’m delighted it has.”