A home for Center for Restoration Ministries is in sight; downpayment needed to seal the deal 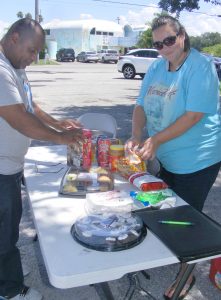 Pastor Freddie Roberts, Minerva Garcia and Madeline Hughes (not pictured) work every Thursday dispensing food to the homeless in Ruskin. During the week Garcia uses her couponing skills to get more bang for the buck.

Pastor Freddie Roberts and his wife Teresa didn’t just want to build “another church.” They wanted to have classes for families and children, and outreach programs that met the community’s needs. So they chose the name Center for Restoration Ministries deliberately to fit the bill.

“We want to restore families, help people find wholeness and do a lot of outreach in whatever area God calls us,” said Pastor Freddie in an interview when I first met him in April.

At that time, he and some of his members, led by Madeline Hughes and Minerva Garcia, were feeding the homeless from four local homeless camps within walking distance of Thriftway Plaza in Ruskin (so named because many years ago it was anchored by a Thriftway grocery store), but now is best known for housing the Ruskin post office.

When we met in April, the clock was ticking for them to leave the building next to the post office because of the building’s sale.

Now they hold church at Big Jim’s Storage on the corner of S.R. 674 and 21st Street and do their feeding of the homeless in the parking lot of Meet Ma’s Restaurant on Shell Point Road on Thursdays from about 10:45 a.m. to 1 p.m.

The clock is ticking there as well.

“If they leave, we’ll have to move again,” said Pastor Freddie. “But we know God is in charge.” 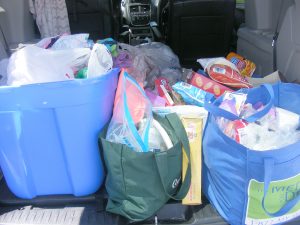 PENNY FLETCHER PHOTOS
Pastor Freddie Roberts of the Center for Restoration Ministries, is seeking a permanent home for services to the community’s poor. Having found the perfect spot, now all he needs is the down payment.

Local realtor Diane Koehler, owner of Coming Home Real Estate, recently paid the center’s entry fees into the Pigs in the Parking Lot event held recently in Apollo Beach, and also bought raffle prizes as an incentive for people to visit their table.

More importantly, Koehler has found the perfect small building within walking distance for the area’s homeless to come and get food, help with medical and food stamp assistance and even take showers.

However, who worked for the county for many years, was helping the poor who came through their doors with all these things when they had a building, but is unable to do this out in the open.

“Madeline even has a friend who is a psychiatrist who is willing to help us with the homeless, many of whom have mental problems,” said Garcia in a follow-up interview June 23, as they fed the hungry under a big shade tree.

One man only wanted water, which he shared with the puppy he held in his arms.

“They have so little, and are very giving,” said Garcia.

The building Koehler has located is very cheap by today’s standards, but the ministry would have to have $20,000 to qualify for the loan. The full price isn’t much more than twice that amount, and includes a block and stucco building in a commercial area with nearly one-third of an acre of land.

“People would rather donate to a dying gorilla than the homeless,” said Garcia.

Pastor Freddie agreed, saying he had recently seen thousands given in one day for animals, yet nothing for homeless — and poor — humans. “I love animals,” he said. “They are God’s creatures too. But human lives are so important, and so few seem to see these people.”

Two problems the group cited are: many have mental illnesses and some people think homeless people are just lazy.

But where it is easier for many healthy people with no mental problems to “pull themselves up by their bootstraps,” some of these people cannot even see if they have any “boots.”

Problems began about 20 years ago when the mental institutions released many people who had nowhere to go. It was supposed to be a “freedom thing.”

“Untreated bipolar disease [(affective) disorder]; depression; anxiety; schizophrenia; and other mental illnesses make those who have them act strangely,” said Garcia. “And people often fear them when really the mentally ill are just as afraid, or even more so, of people they don’t know.”

When they were released from institutions, a great number had nowhere to go and headed for Florida where they would not freeze to death.

The shelters are all full. People stand in line from as early as 4 p.m. to get a bed at the large ministries in Tampa, and still many do not get in.

“We’ve fed more than 2,000 families [a year] when we had a building. We fed the community as well, not just those who were homeless,” said Garcia. “We’re feeding about 50 people a week on Thursdays in this parking lot for now.”

She and the others collect coupons during the week and hit sales to acquire as much needed food and toiletries as they can.