Audubon Society proud of their work at Felts Preserve 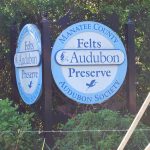 The Felts Preserve is located at the corner of Experimental Farm Road and 24th Avenue East, north of Palmetto. Otis and Anita Felts donated the 27-acres to the Manatee Audubon Society in 2002 to preserve it from development. 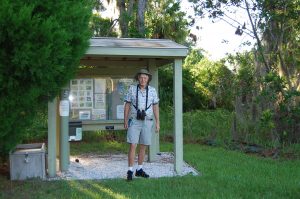 CARL MARIO NUDI PHOTOs
Steve Black stands under the kiosk near the parking lot of the Felts Preserve. Like much of the improvements made to the preserve, the kiosk was built with funds from a grant.

Like an oasis in a hot desert, the Manatee Audubon Society’s Felts Preserve provides a natural refuge within a sea of expanding development in northern Manatee County.

“That was an orange grove when we took over the property,” said Steve Black, as he pointed across the wildflower meadow on the southeastern portion of the 27 acres.

Black was president of the local Audubon chapter when Otis and Anita Felts gave the property on the southeast corner of Experimental Farm Road and 24th Avenue East to the organization in 2002.

“They wanted to make sure it wasn’t developed,” said Black.

The Manatee Audubon Society, which is known for its wildlife conservation efforts, especially birds and their habitat, is using the preserve as an environmental education center.

“It took the first three to five years to get it to this condition,” Black said. “There was a tremendous amount of invasive plants, and we removed about 225 used tires from the swamp.” 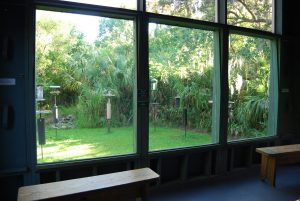 Visitors to the Felts Preserve can observe birds feeding from the comfort of an enclosed bird blind.

He said all the work was done by about 48 volunteers.

The Audubon group first formed a land-use committee and drew up a master plan. That plan has been guiding the restoration and improvements to the property for the last 14 years, Black said.

After the mass removal of invasive plants, they planted a variety of native plants, such as bald cypress, long-leaf pine, and wax myrtle, which attract birds, butterflies and other wildlife.

More than 150 bird and 30 butterfly species have been documented at the preserve.

There also were major improvements made to two ponds on the property. 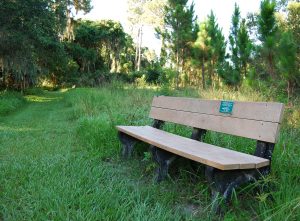 The Felts Preserve has trails to check out the wildlife and plants with benches to rest while walking. The benches are donated to the Manatee Audubon Society in memory of friends and family.

“We didn’t just create a habitat to attract birds,” said Black. “We like to have different habitats to attract other wildlife.”

To facilitate visitors, walking trails were created and informational signs installed over the years.

There is also a comfortable indoor blind for bird and wildlife watching and photography.

The preserve, probably the only local Audubon club-owned one in the nation, has helped make a difference in member participation.

“When we inherited the property, as president I was always looking for something to make the club interesting,” said Black, who served as president for six years. 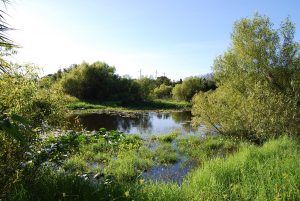 Volunteers cleaned out the two ponds at Felts Preserve during the first three years of ownership, removing around 225 used tires.

He said they would have bird-watching outings, or participate in roadside and beach cleanups.

“But this project made a difference in membership involvement and growth,” Black said. “It’s given us a purpose and mission.”

The Felts Preserve also has created opportunity for other community groups to get involved.

The Manatee River Garden Club has provided funding to plant several gardens, while other organizations have given money for community outreach projects.

“The Mosaic Company gave us a grant to bring elementary schoolchildren to the preserve for field trips,” said Black. 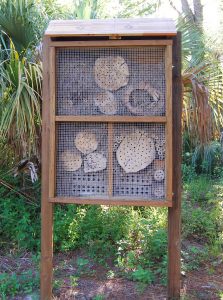 Boy Scout Dakota Lapinsky designed and built the bee hotel at the Felts Preserve as part of his project to earn his Eagle rank.

He said it was important to teach youth about nature and hopefully they will become members of the Junior Audubon.

The Junior Audubon meets once a month at the preserve to explore the outdoors and learn about birds, wildlife and the environment using the national Audubon Adventures’ learning modules.

Another way the county Audubon group influenced youth was to offer preserve resources for local scout groups with opportunities to work on their projects.

“About 150 to 180 Boy Scouts earned merit badges through work they did at the preserve,” said Jim Stephenson, a current member of the board of directors, a past president and holder of other office positions.

“And one Girl Scout troop did a cleanup project to earn community service credit,” Stephenson said.

One scout, Dakota Lapinsky, did multiple projects to earn his Eagle rank.

Lapinsky built the handicap gate, constructed a bridge, designed and built the informational signs and created a bee hotel. 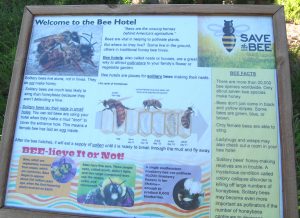 Boy Scout Dakota Lapinsky designed and built all of the informational signs along the walking trail at the Felts Preserve as part of his project to earn his Eagle rank.

“These projects were completed in February,” Stephenson said.

The Felts Preserve is open to the public from sunrise to sunset every day of the week.

If the vehicle access gate is locked, visitors can park on the road and walk through the pedestrian access.

There is a kiosk with brochures for a self-guided trail tour highlighting points of interest.

For more information about the Manatee Audubon Society, visit manateeaudubon.org.