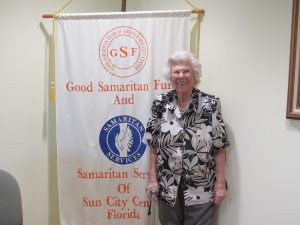 BILL HODGES PHOTOS
Doris Ragland, the driving force behind Samaritan Services for 31 years, was all smiles at a Retirement Open House on June 21. Many of the volunteers, CA directors and other SCC residents attended to wish her well.

Samaritan Services President Doris Ragland says her goal as a child was to “help people, be around people, and do things for people.” She certainly has achieved that goal, both in her nursing career and in her 31 years as the matriarch of an organization whose only purpose is to help Sun City Center residents.

Sun City Center became Ragland’s home when she came here in 1973 from Ohio. As a registered nurse, she quickly found a role in the office of the only doctor in town. From that point, her story is a classic example of “find a need and fill it.” In 1975, she started an Alzheimer’s support group and subsequently Samaritan Services.

Now, at age 95, Ragland deserves a rest. She says she is going to “drink wine and go fishing.” The volunteers she has led over the years can see her doing just that on the dock of her soon-to-be new home in Bradenton. Her son and daughter who live nearby wanted her to live with them but she would hear none of that. She insists on having her own house because she doesn’t want to be underfoot. “I haven’t even decided if I will give them a key to the house,” she quipped. 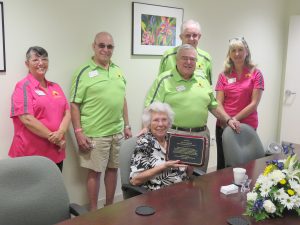 Community Association President David Floyd, in presenting Doris Ragland a plaque from the CA, said “We are really fortunate that you have been such an important part of our community for so many years.” Also attending were (from left) Directors Marilyn Cote-Miller, Sam Sudman, Joe Elam and Community Manager Lyn Reitz.

Samaritan Services held an Open House in Ragland’s honor on June 21 at Samaritan Services’ new headquarters on N. Pebble Beach Boulevard. She was given a plaque from the Community Association, presented by President David Floyd. Samaritan Services’ Vice President Lee Leverett also presented her the organization’s first Sirius Award on behalf of the 200 volunteers. “You are truly our brightest star,” said Leverett, explaining that Sirius is the brightest star visible from any part of earth. In May, Ragland received the Senior Connection “Volunteer of the Year” award.

Leverett said that the president’s post will remain vacant until the nine-member board of directors elect a new president this summer.

Samaritan Services is a 501(c) 3 volunteer-driven, organization that provides many support services sorely needed in this area of mostly 55+ residents. Financed solely by donations and fundraisers, their services include transportation of residents to medical appointments in Brandon, Bradenton and Tampa; transportation for in-town appointments and shopping; help in solving medical insurance questions; and caregiver respite care. They also coordinate the Meals on Wheels Program and have an Alzheimer’s support group. For more information on the organization or to inquire about volunteer opportunities, call 813-634-9283.