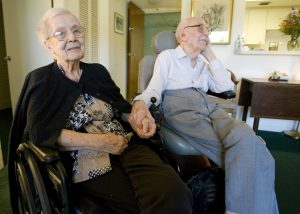 It was in Sun City Center that I was honored to meet Harry Landis, 107, who was then one of the world’s last remaining World War I veterans. Today there are none. What struck me most was how he held his wife, Eleanor’s hand during our entire visit. People truly come here to live.
MITCH TRAPHAGEN PHOTO

In late 2001, I was a brand-new reporter for The Observer News. My first article, a photo essay, was of a pirate-themed wedding that took place at what was then called Bahia Beach.

I certainly can’t say that life fell into a normal routine after that horrific day, but the job went on, and I learned along with it.

At one point, Brenda Knowles, the editor, asked me to cover a grand-opening party for a medical office in Sun City Center. “It begins at 8,” she told me.

Although I had lived in Ruskin since 1994, my life largely circulated around the growing marina community in which my wife and I lived. Until I started my newspaper job, I never had a reason to go to Sun City Center. Back then, Ruskin had three grocery stores, a Kmart and a Walmart (although the Walmart was technically on a disputed border between the two communities).

Regardless, with my assignment in mind, I left about 7:30 to ensure that I would arrive on time. There wasn’t a single car in the parking lot. In fact, there were very few cars even out on the streets. I tried the door to the medical office and it was locked up tight.

I had arrived at 8 p.m. Absolutely nothing was happening that evening in 2001 in Sun City Center at 8 p.m.

For the life of me, I had absolutely no idea back then that an event described as a party would begin at 8 a.m.

Many things have changed since. Working for this newspaper I’ve been privileged to meet hundreds, if not thousands, of Sun City Center residents. I’ve been even more honored and privileged to tell some of their stories. I’ve long said that I could randomly knock on doors in this community and walk away not only amazed but also with a front- page caliber story.

Florida was once known as “God’s Waiting Room,” but that is hardly the case. People don’t move here to die, they come here, especially to communities like Sun City Center, to live. Many people who live here don’t simply fade into the background upon arriving, they turn out, often to help others and often with an open wallet. They walk and ride the neighborhoods; they wave, even at strangers as they pass by. And while the nightclub in Orlando is in some ways a million miles away from Sun City Center, people here feel the pain of the horrific, inexplicable tragedy. They know, possibly better than most, what is happening in their greater city and in the world.

Singer Jimmy Buffett once sang about retirees and how they were living and dying in three quarter-time. That is the musical time signature of the waltz. The truth to that is that time does move differently here; it must — this is not Manhattan or downtown Tampa. Perhaps three-quarter time is a good way to put it. And in that time, people step forward to help others.

In this community I’ve met so many veterans, teachers, engineers and even rocket scientists. They think nothing of their own stories but once drawn out in conversation, many are the stuff from which Hollywood movies could be made. There was the woman I was to  meet for a simple photograph for being named artist of the month — just a piece of what we call “wild art” — a photo and a caption.

But in sitting down to chat, I found out that she was the first woman allowed on NASA’s launch pads in the early 1960s. And she had once sailed a boat from Mexico to Florida, only to get caught up in Cuba during the very height of the Cold War, and she managed to extricate herself, hiding her government credentials. She is a remarkable artist and a remarkable woman.

Several years ago on the same day, I interviewed two World War II veterans. Both told me of compelling moments in their service — for both, a bombing mission over Nazi Germany. For one man, it was the peak of his service: he was selected to be the one person in the entire flight squadron to use the then-top secret Norden Bombsight. His accurate selection of the target was the signal for the entire squadron.

A few blocks away, another man told me that during his mission, his plane had been shot down and he became a prisoner of war in Germany. The details he shared were sparse but it was clear he served heroically.

It was possible that those two men, living only blocks apart in Sun City Center, were on the very same bombing mission. After the interviews, they met for the first time.

I am blessed to have met Ed Socha, a man I’ve respected and admired for many years. Through him, I was able to meet one of the last surviving World War I veterans. Through him, I learned about sacrifice and hard work. A Pearl Harbor Survivor and career Navy officer, I’ve recorded some of his stories and even a class he gave to young people on how to properly fold the American Flag. At some point, I’ll ask to post that video for all to see; so we can all know that simple measure of respect, given by a man of honor.

But there is far more to this community than past stories; there is more to it than those who step up to help. There is the human side that is all too easy to forget.

So many years ago I remember visiting the old Publix just west of I-75. It was the only one in the area at that time and people from both Ruskin and Sun City Center shopped there. I remember seeing people, usually elderly women, as they would linger at the checkout counter, apparently hoping for conversation. My heart broke as I realized that they were probably, unexpectedly, alone in this world. And a few words from a cashier or even another customer seemed to mean a great deal to them.

I felt for them then. I understand it more completely now. I am alone in Sun City Center — at least temporarily— cat and housesitting for a friend. It’s a quiet place by design. But perhaps it can be too quiet for those of us who are alone.

Sun City Center has changed dramatically over the years. Back then, those of the Vietnam era were still too young to live here. Today there is a different energy about the place, a different vibe. Things change and change is sometimes good.

I’m only 18 short months from being age-eligible to live here. Could I, would I? It’s a beautiful and safe community. It is a wonderful and rare place in America. It is filled with amazing people of honor. But I don’t know if I could.

I could happily live in three quarter time. I’m just not certain I could do it alone.