Ruskin woman, once homeless, now builds homes for others 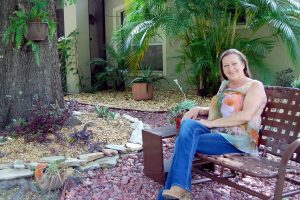 On Father’s Day 1998 Eileen Burke and her two children moved into the new home she and her seven neighbors had spent the past 18 months building. Even the kids pitched in.

They were among the earliest participants in a government-sponsored, affordable housing program called Homes for Hillsborough, now known as the Florida Home Partnership. The program helps low- and moderate-income residents achieve their dreams of home ownership by requiring “down payments” of at least 600 hours of sweat equity and the mutual help of their prospective neighbors in the building of their homes. Participants provide semi-skilled and unskilled labor under the supervision of Florida Home Partnership family construction coordinators. Jobs like plumbing, electrical work and roofing are done by certified contractors.

Burke learned about the program in 1994, when she found a flier in the Walmart parking lot. Back then, she was living with her kids, then 7 and 10, in a subsidized apartment in Ruskin and employed full time as an office worker for Sanwa Growers in Wimauma.

“It sounded too good to be true,” Burke said. “I had been looking for somewhere else to live, and as a single mother I wasn’t having any luck trying to buy a home. Everyone told me to come back when I got married.”

Burke applied for the Homes for Hillsborough program immediately but it was so new, years passed before funding was in place and she was approved. She received her acceptance letter in late 1996.

As a program participant, Burke worked full time, had a part-time cleaning business and worked on her home evenings and weekends. Her children, now 9 and 12, pitched in on jobs they could handle, including laying sod and painting.

“We did the things licensed contractors didn’t do, like digging trenches for the plumbing and cleaning up after masons poured concrete,” Burke said. “We even nailed on the roof plywood. Basically, we did some work in every phase of construction.”

Toward the end of her time on the board, Burke learned about an opening for family construction coordinator, a role that would enable her to work with families as they built their new homes, including her daughter, Nicole, who had graduated from Riverview High School, applied to build her own home through the Partnership and was accepted.

“I applied for the position because most of the program’s clientele were women and I felt a female presence was needed on the construction site,” Burke said.

In May 2005, Pfeiffer hired Burke for the full-time job.

“She has a lot of initiative. She’s extremely caring and very detailed,” Pfeiffer said. “Over the years, she filled in wherever we had a need.”

Today, Burke is the Florida Home Partnership’s special projects coordinator, a role in which she oversees “build on your lot” homes, coordinates home remodeling projects and the rehabbing of homes, maintains the partnership’s apartment buildings, manages home warranties and applies for grant funding.

As part of her continuing interest in the home-building process, she became its expert on green building and Energy Star requirements, which are now part of the program’s standard energy efficiency upgrades and new home features.

And in May Burke’s journey came full circle when she earned the Florida residential contractor’s license. Back when she was building her home, she was homeless for three-and-a-half months. A local church gave her family shelter in its fellowship hall so she and her children would have a place to sleep.

“Had I not taken the time to read what I thought was a piece litter, I may have never have known about the program,” Burke said. “It’s been a long journey but I would do it all over again. Getting involved in the program and building my own house gave me confidence, and I became more vested in my community as a property owner.

“I also got a whole new career.”

Her colleagues are glad she did.

“I’m not surprised she ultimately earned her contractor’s license,” Pfeiffer said. “I’ve had (one) for 25 years and sometimes I think she knows more of the details of the nuts and bolts of construction than I do. We’re very proud of her.”

For additional information on the Florida Home Partnership, call 813-672-7860.