Scams abound: many target the over-65 crowd: Warning for last-minute shoppers and ‘lonely hearts’ 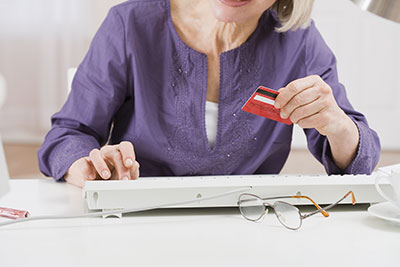 In the last-minute rush to buy gifts for friends and family, many don’t check out the online companies they order from like they usually would.

Warnings come from many sources: the Hillsborough County Sheriff’s Office, the Better Business Bureau, and Seniors vs. Crime, a program of the Florida Attorney General’s Office. The scams seem endless and many new ones are quite inventive and hard to guard against unless you’re aware of them.

Although these warnings are intended for those ordering holiday gifts at the last minute online, the information provided is good all year long, as are the warnings about losing your life savings to “phony relationships” (later in this story).

The U.S. Postal Service, FedEx, and  UPS all report an increase in theft of deliveries left on porches and doorsteps.

People actually follow the delivery trucks, wait outside the home to make sure no one comes after the packages, and then steal them, said Jim Granan, office manager of Seniors vs. Crime in Sun City Center.

“The deliveries are made during the day when people are at work. If you know you aren’t going to be home, you need to have them sent to your office or to another person’s house,” Granan said.

According to the Better Business Bureau, porch theft is not the only scam created when people do not go into a store to shop.

“Use only websites you have been dealing with awhile and are certain are reliable,” said Gail Gause, a six-year veteran of Seniors vs. Crime. “There are many sites you think are one thing but they’re really not.”

The tendency is for people not to check websites or companies well when placing last-minute holiday orders, Gause said.

The BBB says many scams use URLs [web addresses] that are very similar to real ones, with perhaps just a letter or two difference in spelling. The BBB also warns about fake email shipping notifications with an attachment or link to a site that downloads computer viruses programmed to steal passwords, credit card numbers, bank information and even complete identities.

Phony charities also abound during the holidays when people are in a giving mood, so the BBB advises everyone check out the charity at www.give.org before making a donation.

Purchases prepaid through debit cards, gift cards, wire transfers, or third parties cannot be checked or traced, so many scammers ask for these unusual forms of payment.

The last-minute holiday rush is a good time for people to become victims, Gause said. But people over 65 are specifically targeted all year long.

“It breaks my heart, some of the things I’ve seen,” she said. “Some people are lured by something they think is free. All they’re told [is that] they have to pay shipping. Or they think they’re making a one-time purchase, and then something comes out of their bank account every month, or they start receiving all kinds of other products they don’t want or need.”

Worse yet, are the “heart-throb scams” that prey on lonely (usually older) women.

Two cases of women in their 90s stand out in Gause’s mind.

The first was a woman who was told she had won a multimillion-dollar lottery but before she could collect it she had to pay fees.

“These amounted to more than $150,000,” Gause said. “Her daughter lived nearby, and I asked her if she had shown any of the papers to her, and she said she hadn’t.”

The other thing that tore at Gause’s heartstrings was a woman, also in her 90s, who began getting attention from a much younger man.

“He was probably about 30 years younger,” Gause said. “After a while, he asked her if he could borrow $200,000 and wrote up a formal-looking agreement. It stated that he repay her $500 a month until it was all repaid, and if she died before that, the debt was cancelled.”

Gause said she found this out from the woman’s family after she died.

“When someone loses everything, it tears me apart,” Gause said.

That’s why she and other volunteers work at Seniors vs. Crime. To find out more about this organization, call 813- 634-8666 or visit www.seniorsvscrime.com.

If you encounter any of these or other scams, the BBB asked that you call Bryan Oglesby, director of community relations and outreach, at the BBB serving West Central Florida at 727-535-5522.