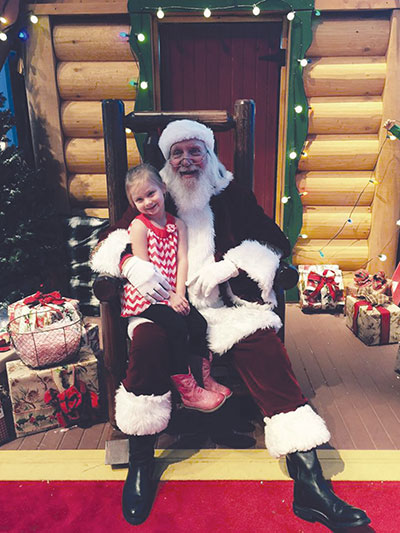 Adasyn Hopp, pictured with Santa earlier this month, isn’t going to let the theft of her great-grandmother’s Christmas inflatable display — something her great-grandparents have been doing since she was born — ruin her holiday. Alieta Hopp photo.

Some heartless thieves stole four large inflatable Christmas decorations from the Mitchell home on Gibsonton Drive earlier this month, a display the family had intended to brighten the holiday for their four-year-old great granddaughter, Adasyn. But that’s not going to ruin her holiday.

They came in the night, Dec. 6 was clear,

After 2 a.m. the grinches crept through the yard,
The Mitchell family on a cruise, they acted like cowards.

Spying a Santa and Queen Elsa, like the movie, their hearts were frozen,
So off they went taking the displays they had chosen.
Like the Grinch who stole the presents from Whoville in the night,
These nocturnal nasties took the inflatables, they could hardly put up a fight.

Heartbroken at first, Adasyn missed her big toys,
She talked to the reindeer and Santa, for this girl, no boys.
She posed with the Elsa inflatable almost every day,
Chatting away to the Queen in her own special way.

“At least they didn’t take my life preserver,” said the tot,
Even though the nasties had taken quite a lot.
We buy the inflatables every year for her,” said Adasyn’s great-grandma, who she calls Ba,
Explaining to Adasyn they would get more next Christmas, it really wasn’t that far.

“I’m very disappointed,” was the word from the 4-year-old, having her say,
Hoping, just maybe, the toys might return one day.
“I’d really like to have them back,”
But the chances for that are looking quite black.

Jean Leonard, a neighbor, was aghast at the theft,
A yard now empty, of holiday cheer bereft.
Jean’s telling one and all to keep an eye out,
Reminding all that grinches are around and about.

It’s not just here, it’s happening other places,
Holiday lights and inflatables disappearing like snowmen in a desert oasis.
So take care of your displays, advises Jean with a passion,
Write names and numbers on the back, sadly, it’s a new Christmas fashion.

The nasties won’t steal the spirit from Adasyn,
She has her smile back, as big as that avenue in New York — Madison.
For her and the tot army awaiting Christmas morning,
There will still be toys and presents under trees with lights adorning.

“She won’t let anything ruin her Christmas,” said Alieta, Adasyn’s mom,
Who first comforted and explained the theft to her, a voice of pure calm.
As for the nasties who instead of hearts have a black hole,
Santa will have a special gift for them this Christmas: a big lump of coal.

The inflatables taken were a scene featuring characters from the children’s film Frozen, a Santa holding a fish, a large Santa train, a Santa candy cane arch and a Santa party barge.

Anyone with information about the theft may email alietamitchell@gmail.com.