’Tis the season for crime, both high tech and low 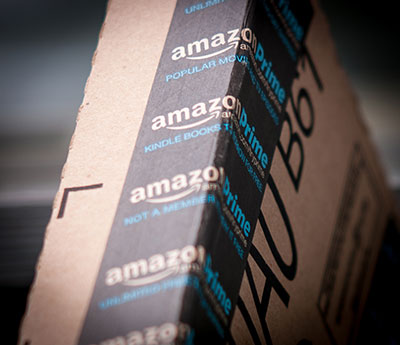 Although “porch pirates,” those who steal packages left at doorsteps by delivery companies, have been around for years, the term is gaining traction this year as increased online sales has resulted in increased home deliveries and increased theft. Mitch Traphagen photos.

In the land of eternal yuletide warmth and sunshine, something cold brews during the holiday season. According to a leading consumer and business financial analysis website, Florida leads most of the nation in identity theft. And that high-tech crime, particularly this month, is coupled with decidedly low-tech crime as the term “porch pirates” emerges to describe the theft of packages from doorsteps resulting from billions of dollars in online ordering.

Wallethub.com, a consumer and business financial website, recently published the results of a study that revealed that Florida leads most of the nation, behind only the District of Columbia, in identity theft and related cybercrime.

Wallethub.com went on to provide a handful of tips to prevent identity theft and other cybercrimes and also provided input from a panel of security and financial experts. Among the tips were:

Emphasize email security: It’s obviously important to use strong passwords for all financial accounts, but you may not realize how essential it is to focus on email in the course of shoring up such cyber defenses. Your primary email address will likely serve as your username and means of resetting your password on other websites, so if it’s vulnerable, all of your other accounts will be, too. As a result, make sure to use an especially secure password and establish two-step verification for this account.

Sign up for credit monitoring: Credit monitoring is the best way to keep tabs on your credit report, providing peace of mind in the form of alerts about important changes to your file, including potential signs of identity theft. WalletHub offers free monitoring of your TransUnion credit report.

Leverage account alerts and update contact information: Setting up online management for all of your financial accounts (e.g., credit cards, loans, IRS, Social Security), and keeping your phone number, email address and street address up to date will make them harder for identity thieves to hijack. Establishing alerts for changes to your contact information and other suspicious account activity will serve as a safeguard.

Over the past few years there has been considerable coverage of massive security breaches, with both corporations and government as the primary victims. The real victims, however, are the millions of individuals unwillingly and sometimes unknowingly put at risk due to such wide-scale breaches.

But such news illustrates how difficult it is to combat cybercrime if well-financed national retailers and health-care corporations, and even the U.S. government are successfully targeted. For an individual, security may seem daunting in that light. But common-sense practices, such as those listed above and others, can go far to provide a high level of personal protection.

The Wallethub.com findings may be found via a link on the Observer News website or at tinyurl.com/observer-wallethub.

On the other end of the technological spectrum is just old-fashioned theft. This year’s Cyber-Monday set an all-time record for online sales activity. And online ordering is expected to only continue to grow. The U.S. Postal Service, UPS, Fedex and others have and will be delivering tens of millions of packages to doorsteps around the nation, most often during working hours.

“Porch pirates” is a term that is in increased use this year. Criminals know that December is the prime time for package deliveries and delivery men and women are burdened with a vastly increased workload, thus requiring them to simply deliver and move on with haste. Porch pirates, or those who steal packages left on doorsteps are increasingly making Christmas emptier for untold thousands of Americans by simply stealing packages left on doorsteps.

The only true solution is to not allow packages to be left at your door without a signature, or to use a work address for delivery, or, in the case of Amazon, use an “Amazon Locker” — a secure delivery location set up in a third-party business, such as 7-11 stores.

Unfortunately, Amazon Lockers are currently not available in South Hillsborough as of press time.

Regardless, some law enforcement agencies and analysts predict that, like the new high record in online sales, porch piracy will also be setting records this year. CBS News reported on one woman who was pushing a stroller through a neighborhood, a normal and seemingly innocent activity. Inside the stroller was not a baby but rather packages she had been picking up from homes in the neighborhood. 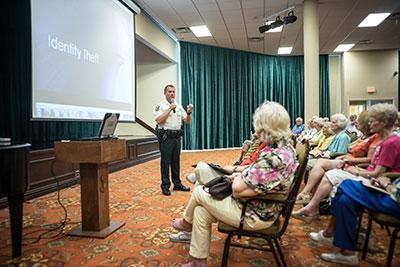 HCSO Sun City Center Community Resource Deputy Jeff Merry gives a presentation on identity theft last summer. It was one of numerous free seminars he provided throughout the community.

In Sun City Center, Hillsborough County Sheriff’s Office Community Resource Deputy Jeff Merry has made it his personal mission to combat identity theft and other such crimes against seniors, widely considered to be a highly vulnerable population. Over the months, he has given numerous free seminars across the community with information on how to protect yourself and your finances. The deputy takes such crimes seriously — and is available to do what he can to help victims, while working to prevent such crime from making new victims.

Although as business and government breaches have illustrated, few people are entirely safe from identity theft, but there are steps you can take to protect yourself online. And while you’re tightening up your personal electronic security, keep an eye on your front step.

This year more than past years, crime is increasingly running the spectrum, from ordering to delivery. And while not unheard of, a stroller in a community like Sun City Center just might be something other than what it seems.