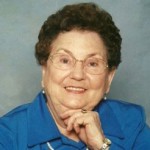 Joyce Aspland, age 87, peacefully passed December 4, 2015, at the Oaks of Huntersville, N.C. She was born April 29, 1928, in Burlington, Vt., to the late Ralph and Dorothy Bush.  Joyce worked much of her life as a nurse and earned a BS degree later in life.

The last 20 years of her life she lived in Sun City Center, Fla., where she was active in her local church, traveled extensively and volunteered for various charities.

She was preceded in death by her devoted husband of 42 years, Joseph Aspland.

A private memorial is being held for the immediate family in her memory. The family would like to thank the entire staff of LKN hospice for all the comfort and care they gave Joyce for the last year of her life.

James Funeral Home of Huntersville is assisting the family. Online condolences may be made at www.jamesfuneralhomelkn.com.

Helen I. Hodenpyl passed away peacefully at home on November 30, 2015, in Sun City Center, Fla., where she had resided since the late 1980s.

The daughter of George and Irene Abel, she was born in New Jersey. After graduating high school, she attended Pace University in New York City and New York University.

Working in the financial district, she met and married Eugene Hodenpyl, who predeceased her in 1996. After the birth of their daughter, Eleanor, they moved to Manhasset, Long Island, where she was active in the Manhasset Community Club, serving as president from 1970 to 1972. When her husband retired, they moved to one of his family’s homes in Sag Harbor, Long Island, residing there until they moved permanently to Sun City Center in 1994.

Helen was active in the United Community Church, SCC, serving as president of the Women’s Fellowship on two separate occasions and serving on several of the church’s committees. She was also involved with the First Presbyterian Church of Sag Harbor, a member of the Golf and Racquet Club in SCC, several bridge groups, the Bridgehampton Club of Bridgehampton, Long Island, and maintained membership in the Squadron A, NYC, where her husbandl had served in the Cavalry and was a longtime member.

She is survived by her daughter, Eleanor Payne Hodenpyl Morgan of Pinehurst, N.C., and St. Lucia, W.I., and a stepdaughter, Alice Fahys Hodenpyl Hutchison of Oro Valley, Arizona.

A Memorial Service will be held at 2 p.m. in the Chapel of the United Community Church, Sun City Center, on Thursday, Dec. 10.

In lieu of flowers, memorials may be sent to LifePath Hospice, the United Community Church of SCC, or the First Presbyterian Church of Sag Harbor, L.I. 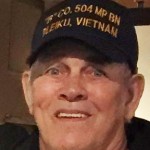 Bill served in Vietnam as a Combat Military Policeman in 1966-1968. He was a member of United Brotherhood of Carpenters for 50 years; a Mason; Past President of the Ruskin Civic Association, where he worked to get bus shelters in Ruskin; and a member of HCDEC. He was a proud member of the Pleiku MP Association (those who served in Co. B 504th Military Police Battalion in Pleiku, and its detachments, during its tour of duty in the Republic of Vietnam, 1965-1972), and a member of the Veterans of Foreign Wars. 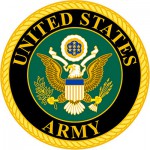 He was a loyal fan of the Tampa Bay Rays and his lifelong dream to go to his team’s World Series came true in 2008.

He is survived by his wife of 24 years, Kathleen Louise McCook; sister RoseMary Cubellis and family; stepdaughter Margaret Christ and family; and many friends and family.

In lieu of flowers the family requests donations to C.A.R.E. Animal Rescue in Ruskin.

After the cemetery service, friends and family will gather at E.G. Simmons’ Park, shelter 17, around 2:30 p.m. to share memories of Bill. Anyone who knew him is welcome.

She is survived by sister Bernice Powell and many loving nieces and nephews. During Jim’s long career as a Vice President of Reynolds International, Jim and Odell were stationed in such places as Alabama, the Philippines, Japan, Thailand and Virginia, allowing her many wonderful stories to pass on to her family.

She was a member of Prince of Peace Catholic Church, Sun City Center. She and Jim spent many years enjoying golf together and spending time with family and friends. Odell will be laid to rest alongside her husband in Greenwood Memorial Gardens, Richmond, Va., (804.784.5214) at 2 p.m. on January 16, 2016. In lieu of flowers, memorial contributions can be made to the American Kidney Fund. Thank you, Lord, for Odell.