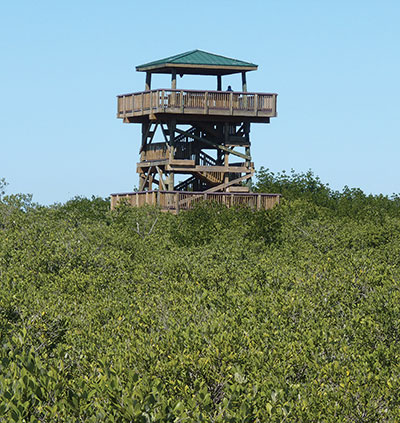 The wildlife observation tower is ready and waiting for the official opening of the Center for Conservation at TECO’s Apollo Beach location.

If all goes according to plan, several new learning experiences will be available in Apollo Beach next spring.

In 1986, Tampa Electric Company opened the Manatee Viewing Center next to its Big Bend Power Plant. Since then, thousands of visitors from all over the world have enjoyed looking at manatees up close from ever-expanding walkways and viewing stations, courtesy of the power company. When the water in Tampa Bay goes below 68 degrees, manatees head for the warm waters discharged by the plant, and may be seen, free of charge, from Nov. 1 to April 30 from 10 a.m. to 5 p.m.

In September 2012, plans were first announced that a three-way partnership between Tampa Electric Company (TECO), the Florida Aquarium and the state would provide a new place for people to see and learn about Florida plant life, fauna and habitat.

Now, just south of the viewing center, people can see that an “interpretive walking trail” has been constructed. It looks like a wooden boardwalk with side rails, and leads to the next area of public wildlife encounters to be unveiled – an array of eco-friendly experiences called the Center for Conservation.

Already constructed are a wildlife observation tower, built partially from recycled materials; much of the walking trail; an office building; and an outdoor pavilion. 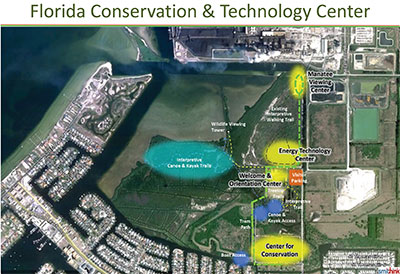 Eventually the 500 acres will contain an energy technology building; the Center for Conservation; camps and an educational facility; an animal rescue, research and holding facility; a saltwater fish hatchery; and they will host catch-and-release fishing programs.

Together these will provide not only services but a place for individuals and groups to have hands-on experiences with marine life. In addition, they will give the aquarium a place to grow food for animals and prepare them for their exhibits,

“We’ve already had some school field trips in temporary facilities,” said Kathy Guindon, director of the Suncoast Youth Conservation Center, which will be based on this site. “We hosted our first youth with a circus tent and porta-potties. We’ve had some homeschoolers and charter schools. Now we’re taking reservations for school trips starting in 2016.”

“We hope the building will be completed in January, we’ll move in on March and have a grand opening sometime later in the spring,” she said.

Cherie Jacobs of TECO explained that it will be open only for prearranged classes and camps.

“Research has already begun at the Conservation Center,” said Joshua Patterson, assistant professor of restoration and agriculture for the University of Florida School of Forest Resources and Conservation Program in Fisheries and Aquatic Sciences.

“From a research perspective, the site is intended to be an open campus where scientists from various places can work on conservation-related issues,” said Patterson. “The University of Florida has a first presence in the form of two PhD researchers — Dr. Mark Flint and myself — and graduate students along with significant operational resources, including a truck, boat, tractor and research supplies, are on site. We are housed in TECO offices and conduct on-site research in a Florida Aquarium greenhouse.” 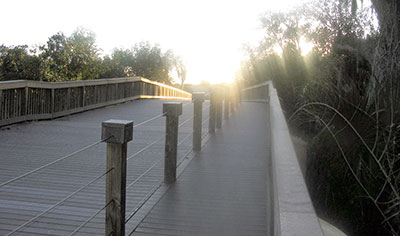 A wooden walkway is already constructed and ready for the opening of the conservation center. Penny Fletcher photo.

Also almost completed and due to open in early 2016 are the FWC’s Youth Conservation Center and the saltwater fishing pond, Jacobs added.

Guidon explained that she and Rebecca Lucas, her assistant, have worked in research for many years and will be working to implement hands-on experiences for youth.

“Rebecca will be going around the county training staff and volunteers on FWC’s saltwater training procedures,” she said.

Eventually, people walking along the trail south from the Manatee Viewing Center will first come upon an Energy Conservation Center; then a Welcome Center; then a canoe and kayak access area; and farther south a boat launch. Just south of this is the Center for Conservation.

By 2017, groundbreaking is expected for the center’s animal rescue, research and holding facility, which will feature rehabilitation programs for endangered species, including sea turtles and coral reefs. The Florida legislature funded $2 million to the Florida Fish and Wildlife office for this project.

Meanwhile, the Florida Aquarium has obtained two grants, one from the National Oceanic and Atmospheric Administration and the other from the county’s Environmental Protection Association to fund fifth-grade wetlands investigation.

“This is called the Wetlands Investigation program and will allow the youth to look at what the Bay and lands will look like 50 years in the future,” Guindon said.

Another aquarium project is the Sea Turtle Hospital, which will be open to the public and should be completed some time in 2017, according to Jacobs.

Stanley Kroh, manager of TECO’s Land & Stewardship Programs, Health & Safety, said the entire project is scheduled to be finished in three to five years and will produce jobs for staff and also some volunteer opportunities.

No job — or expense — totals are yet available for TECO’s part in the project.

Kroh recently spoke to several Audubon societies in the area and would like to speak to more groups. He may be contacted by email at smkroh@tecoenergy.com.

Recently, Sun City Center’s Eagle Audubon Club hosted a program on what’s to come with TECO in Apollo Beach, and its members are excited.

“We do more than birdwatching,” said Ann Whitehall. “This project sounds like an ideal place for us to learn more, see more and do more. We are interested in the whole of Florida’s habitat and environment.”