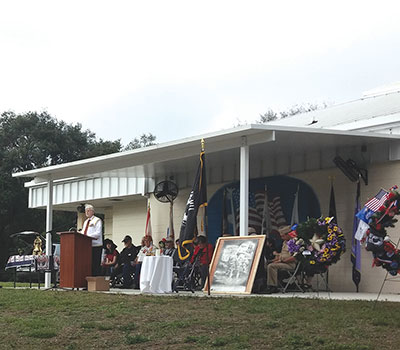 The United States is a land divided among Japan and Nazi Germany in Philip K. Dick’s novel, The Man in the High Castle, a nation of nuclear wastelands — Germany got the atomic bomb first — and human extermination factories.

The writer’s vision of the U.S. in 1962 may seem like science fiction, but consider the fact that had America not entered World War II, Germany would almost certainly have conquered Britain and, without a western front, Russia as well.

National Pearl Harbor Remembrance Day, observed annually on Dec. 7, honors the 2,403 victims who were killed in the Japanese attack but its significance reaches far beyond, making it one of the important dates in U.S. and world history.

And that was remembered Monday at Hillsborough County’s Veterans Memorial Park, where more than 100 people turned out to make sure the sacrifice is not forgotten. Students from the Riverview High School chorus performed “The Star-Spangled Banner” at the event, presented by the Veterans Council of Hillsborough County.

“It was this day 74 years ago in that early morning sneak attack that the Japanese bombed Pearl Harbor,” said U.S. Army Air Corps Sgt. Edward DeMent, the event’s keynote speaker. “It was then that the U.S. entered World War II. A Japanese admiral said at the time that he thought Japan had woken up a sleeping giant and we [the U.S.] sure were.”

National commander of the American Ex-Prisoners of War Association, DeMent enlisted in the U.S. Army Air Corps a short time after Pearl Harbor. He was shot down over Italy and spent 365 days as a prisoner of war. “When my interrogator found out I was from Chicago, his first question to me was ‘Do you know Al Capone?’”

Liberated by U.S. Army General George Patton’s troops, DeMent recalls the iconic American general riding into his POW camp only minutes after the battle ended. “Standing in front of everyone with his two pearl-handled revolvers, he thanked us all for our service and told us we would be going home soon,” said DeMent, who counts the Silver Star and three Purple Hearts among his medals. 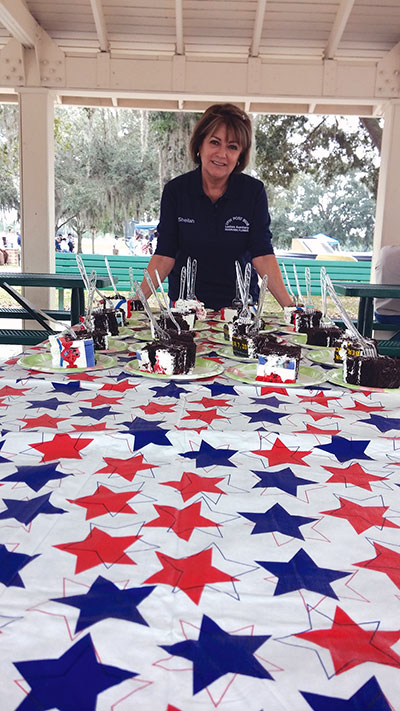 Riverview’s Sheilih Blizzard, who comes from a military family, made sure there was a a tasty treat awaiting everyone who attended the ceremony.

“My father served in World War II; I had two brothers in the military and a husband in the military, so I have always been aware of Pearl Harbor,” said Sheilih Blizzard, a member of VFW Post 8108 Ladies Auxiliary in Riverview. “It was the shot that started a World War and it is part of my family.”

“It’s important that people remember,” said John W. Harrison, a Vietnam-era veteran and member of the POW/MIA Monument Committee, a group that plans to unveil a monument at Veterans Memorial Park next spring dedicated to POWs and those missing in action. “We need to have more days like this.”