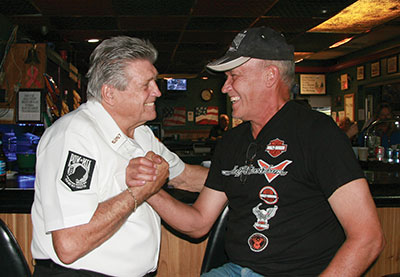 It was around 11 a.m. at the Ruskin VFW post and then-bar manager John MacDonald had just completed his opening procedures when the door buzzer rang. He let the man in, someone he didn’t readily recognize, an unassuming man whose face was partially obscured by a full beard and a black ball cap. The man silently took a seat at the bar and ordered a drink.

“The guy kept looking at me, studying me real intensely,” said MacDonald. “I was starting to feel a little uncomfortable.” After a while, the man moved to a seat down the bar, closer to where MacDonald was working, and asked the bartender to send his “friend” a drink.

“I was puzzled,” said MacDonald, “and a little apprehensive, because I’d never seen this guy at the post before.” But the man was wearing a jacket with some medals from the Vietnam war, so MacDonald had to assume he was a veteran.

Then came these quietly spoken words from the man: “Hey, buddy, don’t you remember me?”

MacDonald brushed aside his slight annoyance, peered back at the man and said, “No, man, I’m sorry, but if we’ve met, I don’t remember you.” He squinted, trying to discern the features of the man’s face, dimly illuminated by the neon bar light. His complexion was weathered, his bearded smile slightly crooked in the darkness. He was wearing a black ball cap with a POW/MIA logo across the front.

“Come on, buddy, don’t you recognize me?” Vaguely troubled, MacDonald moved down the bar, deciding to ignore the man and continue with his bar duties. He was relieved when the guy finally finished his drink and went out the door.

Two days later, however, the man returned, this time clean-shaven and grinning broadly. His slightly skewed smile was more visible than before, and MacDonald saw that he had probably sustained some sort of injury to his face. 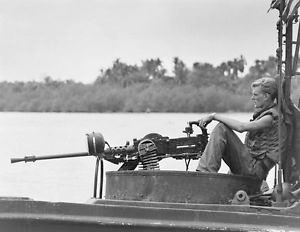 At right, a gunner on a PBR boat patrolling a river during the Vietnam War.

The man began to talk about his experience in Vietnam, where he had served as a gunnery sergeant in the Marines. “I carried a 30-caliber machine gun,” he said, describing a day in the Mekong Delta where he received a gunshot wound that impacted his face.

As his story unfolded, MacDonald felt chills of recognition begin to travel down his spine. His head spun with memories of Vietnam, dark images of weed-choked jungles and mosquito-infested waters. He had served as a petty officer aboard a PBR boat, running reconnaissance missions against the Viet Cong, who were known to use the backwaters to transport weaponry. The PBR (or patrol boat, river) was a small patrol boat used by the U.S. Navy in Vietnam to stop and search river traffic in areas such as the Mekong Delta, the Rung Sat Special Zone and the Saigon River.

The mysterious marine, who identified himself simply as “Gunny,” said that he had been severely injured one day alongside the Bassac River, a bullet lodged in his mouth. He talked about being rescued by a Navy PBR boat that attempted to pick him up. He was bleeding profusely from the gunshot wound to his face, and when he tried to board the boat, he slipped off into the water.

“I thought I was a goner,” he said, but one of the Navy petty officers held on tightly to him, dragging him about 80 feet until they could get him to a safe place to board the boat. 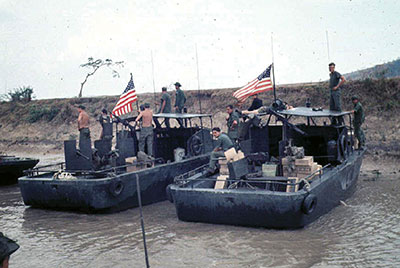 PBR Boats were used in Vietnam to stop and search river traffic in an attempt to disrupt weapon shipments.

“Turns out, that Navy man was me,” said a shocked John MacDonald. As a bolt of sudden recognition shot through him, MacDonald tried to wrap his mind around what was happening. “We got the guy bandaged as best we could that day, but I never knew what happened to him, or whether he even made it,” he said. “I felt like I was looking at a ghost, but he was real, he survived, and there he was, sitting right in front of me on a bar stool.”

Gunny, who nearly perished in the tangled jungles of Vietnam, was equally awed by this twist of fate. “Who would have believed I would ever see the man who saved my life again, let alone right here in my own backyard?” he said.

The next few hours were spent with the two men getting acquainted with one another, reliving that fateful day in Vietnam and talking about how their lives had commenced since then. MacDonald learned that Gunny had been transported by a helicopter Medivac to undergo medical treatment for his serious facial wound. “You always want to hold on to your faith, but you just never know,” said MacDonald.

After a lengthy recovery, Gunny had gone on to serve three more tours in Vietnam, earning two Purple Hearts and several other medals of distinction. MacDonald had also been wounded in battle, his kneecap and ankle shattered by metal and fiberglass shrapnel. He earned a Purple Heart and retired from service, eventually settling in Apollo Beach to create a home and run a successful electrical business.

“Gunny and I became instant friends, right there and then,” said MacDonald, a friendship he says has endured the test of time.

“We do all kinds of things together now — fishing, target practice, going out to dinner, or just hanging out and having a good time,” said MacDonald. “It’s like two strangers came together and became the best of friends.”