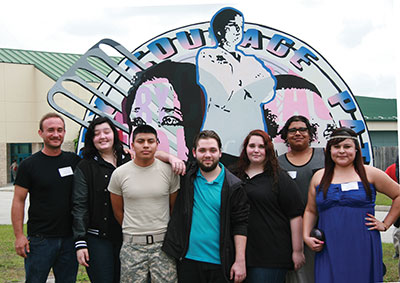 South County Career Center celebrated the unveiling of a stunning new art mural on its school campus on Nov. 19, created in a collaborative effort between SCCC students and local artist Michael Parker.

“The project took nearly a year to complete, from concept and design to scaling, gridding  and painting the final piece,” said Parker, who is responsible for masterminding a number of other monumental public works throughout the Tampa Bay area.

From his studio in Ruskin, Parker works on personal paintings and sculptures, all the while putting together the pieces for large-scale community projects that will involve high school and college students, seniors and other residents from the community.

“Working together on a big project with their peers and neighbors really ignites people in the community,” said Parker. “They’re helping to create something bigger than themselves that they can feel proud of for years to come.”

Parker began working with SCCC students more than 10 months ago, conceptualizing and designing the three large medallions that make up the three-part mural. The medallions feature renderings of actual students along with symbols representing the programs offered at SCCC. The project was devised not only to teach the technical skills of design, drawing and painting, but to give students the pride of working together in a team effort.

The underlying structure for the piece was built by students from Ken Dutton’s woodworking class, while students from such diverse majors as nursing, culinary arts and auto mechanics developed special artistic skills to contribute to the group project.

“It gives kids a lot of self-esteem to work with their peers, creating something with people they may not have even known before,” said Parker, who is also currently working on an art project with teens from the AMI-kids program in Wimauma, a residential facility designed as an alternative to incarceration for youth offenders. The artwork will feature depictions of the 13 core values central to the program, including Safety, Honesty, Integrity, Loyalty, and Dedication, and is expected to be completed by Christmas.

“The practical skills these kids learn gives them a sense they can function on any level if they really want to,” said Parker.

One of Parker’s most recognizable murals is located in the heart of Ruskin, entitled “Head, Heart, and Hands.” The project was initially launched in 2010 and involved a group of 30 local teens and adults who spent six weeks in design sessions planning the mural, and another four weeks painting it. It features a large portrait of town namesake John Ruskin, a leading English art critic, watercolorist and social thinker during the Victorian era. The mural is based on John Ruskin’s philosophy that human happiness requires the mix of the head, heart and hand, and that a strong connection exists between nature, art and society. 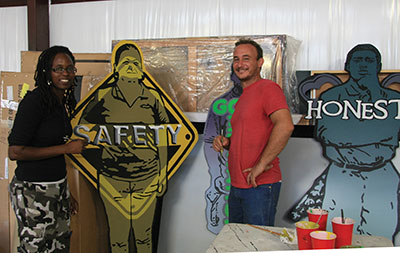 Lakeema Matthew poses with Michael Parker in his Ruskin studio.

Parker, who serves as president of the SouthShore Arts Council, shares many of these same ideals. “I would really like to see Community Arts come back to life in the South Shore area,” he said. “I’d like to get more people in the community involved.”

With a current membership of 200, the SouthShore Arts Council is open to anyone in the community and is instrumental in planning local music and arts festivals, parades, gateway sculptures and artwork honoring local history.

Originally from Boston, Parker has developed a deep connection to the Tampa Bay area, and now calls Ruskin his permanent home. Along with retired art professor and painter Bruce Marsh, he helped initiate the creation of The Big Draw in 2008, a month-long art workshop that has now become an annual event in Ruskin. Housed in a warehouse off U.S. 41, The Big Draw studio became an important resource for local teens and adults, who were able to rent low-cost studio space and gain the artistic and networking skills they needed to become successful professional artists.

With numerous public works in Ruskin, Tampa and the surrounding areas, Parker has become not only a well-known artist but a community leader as well, working to secure grants and public funding from a variety of sources. A former art teacher at the University of South Florida, he continues to encourage communities to visually commemorate their roots, deter graffiti, lower high school drop-out rates and empower people to find their voice through the arts.

“It’s as if I’ve gained celebrity status by being a part of Mr. Parker’s mural projects,” said Lakeema Matthew, a recent graduate of the Fine Arts program at USF, who has donated her skills to several of Parker’s Tampa Bay murals, including the enormous Adamo Drive mural completed in 2013.

Parker’s mural projects continue to inspire community passion while making art accessible to everyone. “Working with a lot of people on a large-scale project is what really gets me fired up,” he said, “even if it just creates a dialogue in the community between people who didn’t know each other existed before.”

For more information on community arts, visit www.parkerpublicart.wordpress.com or www.southshoreartscouncil.org.